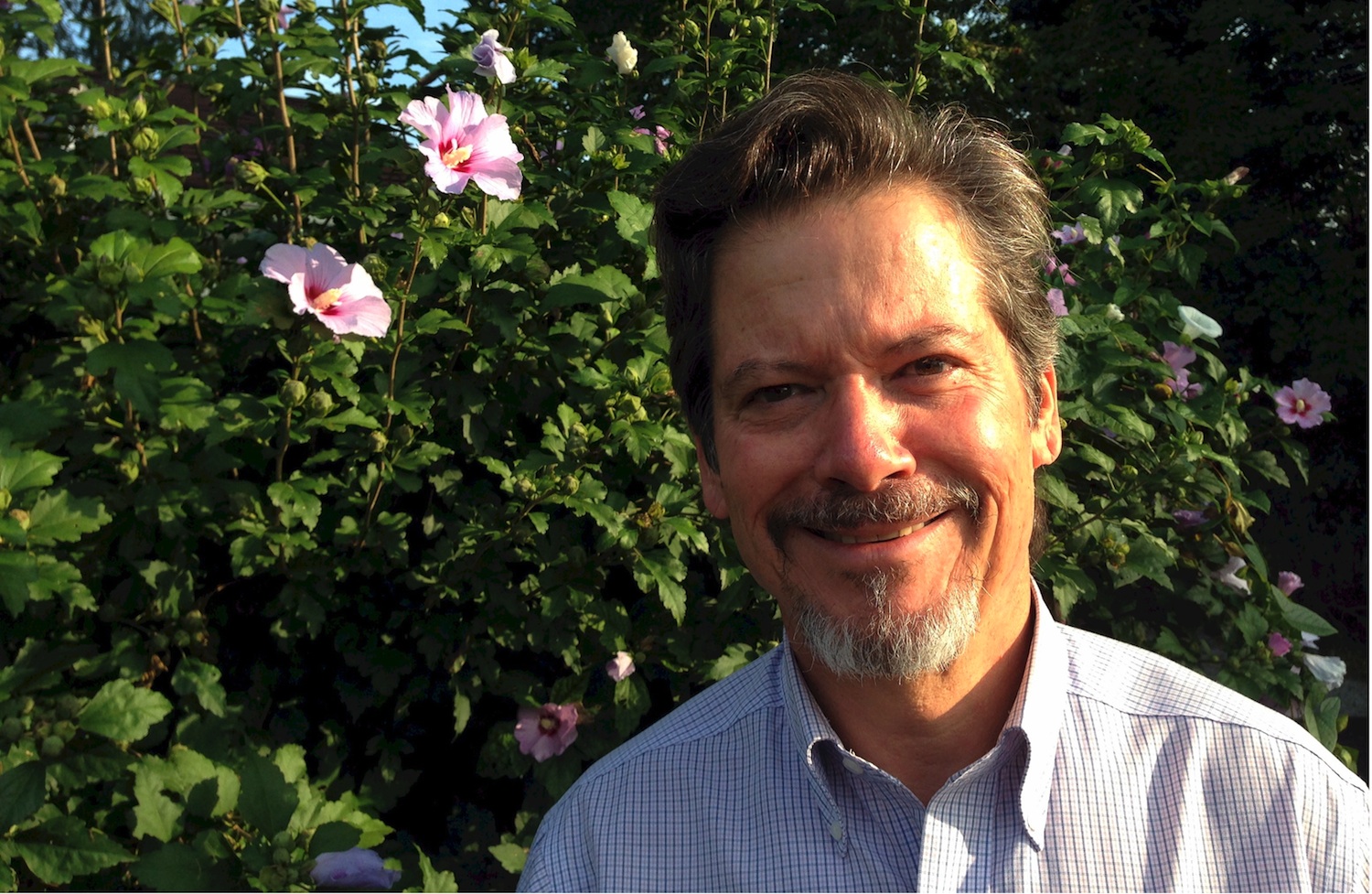 Jeff Oster’s friends thought he was mad to give away health care information for free when he launched his podiatry website in 1999. This was at a time when the media was featuring the latest dotcom millionaires on a near-daily basis.

Oster, who grew up in St. Louis, Mo., said his friends pointed out that he made his living as a podiatrist, diagnosing patients’ feet problems, not giving away that information online.

“But I thought, ‘What if your waiting room was the entire planet? How cool would that be?’” Oster said.

He didn’t grow up wanting to be an ecommerce merchant, but rather, a diesel mechanic.

His stay-at-home mother and insurance-executive father asked Oster to see a college career guidance counselor to explore his options.

“He suggested I take a biology class. I did and I had my first love affair with biology, graduating from Western State College of Colorado in 1979, with a B.A. in Biology, and minor in Chemistry and Geology,” Oster said.

After a summer spent working at the uranium mine near Salida, Colo., Oster was offered a role as the company’s staff biologist.

Unsure where his future lay, Oster visited the guidance counselor again who encouraged him to consider one of the medical professions.

He graduated from the Ohio College of Podiatric Medicine in 1983 and has been a consulting physician and podiatrist in Ohio hospitals ever since, in addition to launching and running MyFootShop.com, a provider of foot care products, in 1999.

Fast forward to 2014, and a typical week for Oster includes 20 hours’ work in his podiatry private practice, 12 hours (or more when he’s on call) at the wound care center at Riverside Methodist Hospital in Columbus, Ohio, and 20 hours a week managing MyFootShop.com.

“The three jobs are interconnected so I consider all combined to be my full-time job,” Oster said.

“I’ve grown MyFootShop.com organically, as I’m unwilling to seek angel capital or sell equity shares. With the exception of 2012 when we took a downturn — probably because our platform was past its use-by date — MyFootShop.com has grown gross revenue by 10 to 15 per cent every year since 1999.”

Oster worked by day in his Ohio podiatry practice, and by night built his website.

“I was in a forum asking how to attach a shopping cart to my Netscape site when a developer started helping, answering my questions. That same developer is still my guy 15 years later,” Oster said.

After endless patches, the website was re-launched for the first time in 15 years this year using nopCommerce.

Oster’s developer chose nopCommerce for its flexibility and plug-ins, including articles (which run MyFootShop.com’s foot and ankle knowledge base), an Ajax cart, sliders, cloud zoom, instant search, and much more.

“Each of the plug-ins allow you to craft what you specifically need, and they’re very inexpensive, ranging from $50 to $100,” Oster said.

“Plus, our stock volume and re-ordering is triggered by the nopCommerce platform, which includes an admin panel where we manage all orders.” 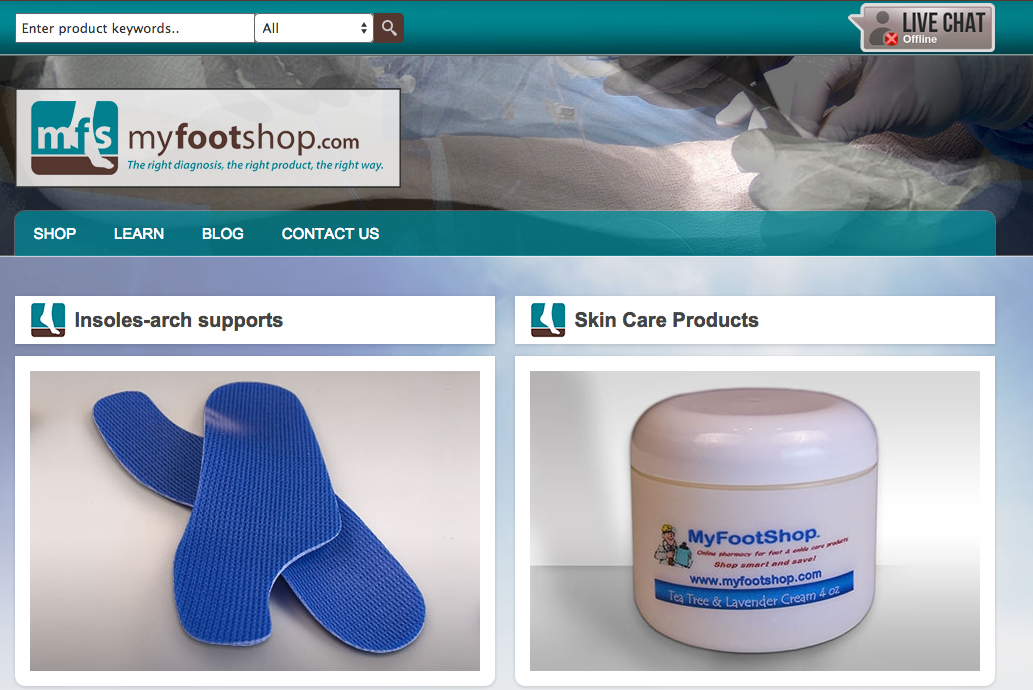 Oster regrets that he kept adding attributes to the first (and for 15 years, the only) version of the MyFootShop.com website, because it became too complex for customers.

“At first we thought that the more ways customers could get their questions answered, the better we helped them to navigate the site. But there were too many options, resulting in no choices being made,” Oster said.

“Our new site helps customers who want to either shop or learn something. It’s much easier to make a decision as there are fewer clicks to your goal,” Oster said.

Oster uses First Data Corporation to process credit card transactions; he renegotiated a rate reduction from 1.9 to 1.8 percent in January.

Oster has been using 724hosting.com in Lompoc, Calif. since his website’s launch in 1999.

He pays a monthly fee of $405 for a dedicated server.

Developer Steve, who has worked with Oster since 1999, works remotely as a full-time contractor, as does Jonathon, who joined two years ago to direct product photo shoots, product videos, and website design.

Part-time employees at the company’s Newark, Ohio shop include graphic artist and anatomy artist Sue, who also provides customer service and fulfillment with Maryanne and Gina, all of whom have worked at MyFootShop.com for over six years. Oster and his wife Thalia consider themselves full-time employees.

“Thalia focuses on operations and manages day-to-day issues as well as manages our accounting, taxes, and payroll,” Oster said. “She’s an attorney by training, which has been very helpful navigating issues specific to running a healthcare website.”

MyFootShop.com has page one rank for many podiatry-related search terms thanks to its foot and ankle articles and videos, curated or produced over time.

“It’s a beast of a task. Obviously we’ve optimized our meta tags, page titles, and keywords. We really have not seen a bump up or down with Panda or Penguin,” Oster said.

All orders are fulfilled in-house using the website’s admin panel in nopCommerce, which integrates with Endicia for USPS shipments.

MyFootShop.com offers shipping free with orders over $75 and customers who order over 12 units of any product receive a 15 per cent discount.

“Early week is our busiest time; sales usually drop off on Fridays and holidays,” Oster said.

The best sellers are the metatarsal pads and carbon graphite orthotics; possibly the most unusual product is from Oster’s own farm.

“We use the wool from our three sheep to make Lamb’s Wool Padding, a product to treat corns, callouses, and sore toes,” Oster said.

MyFootShop.com has been using Quick Books Pro, for accounting and payroll, for years, but Oster has no plans to integrate the software into nopCommerce.

“Since nopCommerce manages customer orders, payments, and stock, we see no need to integrate QuickBooks into those daily functions. QuickBooks would also want to process our credit card payments, which we don’t need it to do,” Oster said.

Like many online retailers, Oster believes it is difficult to track a return on investment from social media and doubts people talk about foot care online. Despite this, he blogs, and has Facebook and Google+ accounts.

He avoids Twitter — “Who would be brave enough to publicly follow me?” — but sees some value in Facebook groups, answering foot care questions and making use of his website’s knowledge base.

“We’ll soon be starting a series of 15-second Instagram videos, such as how to differentiate plantar fasciitis from a heel fracture, how to tell whether it’s infected, and so on,” Oster said.

The website helps provide customers with “medically guided shopping” via education articles, images, and videos to help them find the right diagnoses, and then the right products.

Most customers are college educated, employed, female, and 35-to-60 years old who like to self-direct their own foot care.

Oster regrets not looking for mentors years ago, after his consulting hospital, Riverside Methodist Hospital, suggested he approach Columbus, Ohio-based business incubator TechColumbus in 2012 to help grow his business.

“TechColumbus’ educational program was wonderful for Thalia and me. There’s a lot of smart people there who are willing to help you grow,” Oster said.

He credits TechColumbus and his own hospital’s Research and Innovation Center helping the pair to focus on the business.

While TechColumbus focuses on fast-growing central Ohio start-ups and projects that could grow to $30 million in three years, Oster was ultimately not interested in such hyper-growth for his own business. But TechColumbus provided education and networking opportunities.

As part of the program, Oster and his wife Thalia attended angel investor pitches, during which companies ranging from an upscale online clothing retailer to an oil exploration firm shared their business plans.

“We saw what other entrepreneurs were doing, what they proposed to investors and their plans for growth. We felt our business was validated: it wasn’t just a mom-and-pop shop. We add value to the world and what we do and how we affect people matter,” Oster said.

While he and Thalia were unwilling to sell equity, preferring to run MyFootShop.com as a lifestyle business, the TechColumbus program gave Oster renewed inspiration.