As a boy in Cleveland, Ohio in the 1960s, Fredric Gwinn used to watch his father, a machinist by trade, work on the family car, doing everything from routine maintenance to rebuilding transmissions.

As Gwinn grew up, he did his own automotive maintenance, building a Fiberfab Jamaican kit car on a Volkswagen chassis, and later becoming active in the Mercedes-Benz Club of America. 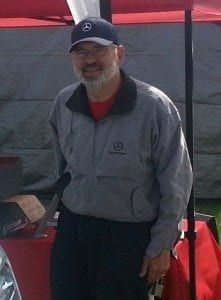 He kept cars as his hobby, graduating from Cleveland State University in 1972 with an accounting degree. He worked for 24 years in manufacturing, distribution, fish farming, and computer database development until he joined Sun Microsystems in 1997 as a professional services project manager.

When the company began restructuring in 2006, he saw his chance to launch his own business, and create a niche in the car industry.

“Sun was laying off several thousand people per year. I started building prototype jack pad tools while I was still working there,” Gwinn said.

“When I launched, I took payment upfront from customers and my vendor did not charge me until I took delivery of the components,” Gwinn said.

Until 2013, Gwinn had no shopping cart save for PayPal “Buy Now” buttons that he embedded into the Reverse Logic’s product pages.

“But as my product line expanded, adding products and updating prices on PayPal buttons required me to edit HTML code on individual product pages, which was too time consuming,” Gwinn said.

He sought a cart that provided product options and coupon codes, and took payments at car shows.

“I found Ecwid in online cart reviews in early 2013. It was easy to implement and elegantly handled product options and coupon codes. It also integrated with PayPal Here, enabling me to take payments at car shows, which make up 10 per cent of my sales,” Gwinn said.

Gwinn built his first Reverse Logic website in 2009 using Composer (an HTML editor in the Mozilla browser), which no longer exists.

He built the next version in 2010 using Apple iWeb, a template-based website creation tool.

“Apple’s iWeb site navigation was not robust. Apple did not support iWeb very well after 2009 and it was not SEO-friendly,” Gwinn said.

He switched in 2013 to Adobe Muse, another site-building tool, when he integrated the Ecwid shopping cart.

“Sales immediately increased 40 per cent with the new website and shopping cart. I sold significantly more ramps with the ‘Heavy Duty’ option because customers could select the option with one click,” Gwinn said.

He said the revised website increased his average order value by making it easy to up-sell product options and related products.

Gwinn used financial software company Intuit until 2013 to process credit card payments, when he discovered its transaction fees, advertised as 1.7 percent, were actually 3.5 percent because most customers were using high-fee reward credit cards.

He switched to PayPal Here in 2013, which allowed him to combine all credit card transactions with his PayPal receipts, enabling him to reduce his fees from 2.9 percent to 2.2 percent.

“And by using the Ecwid mobile app, PayPal Here gives me access to my funds immediately. With Intuit it was two or three days before the funds were in my account,” Gwinn said. 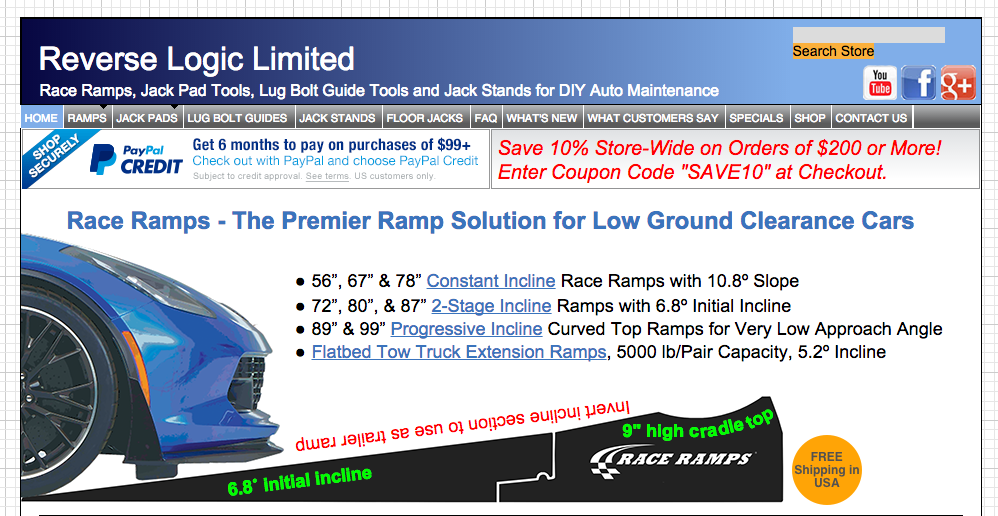 Reverse Logic uses no order management system since it has less than 10 orders per day, on average.

“Sales are fairly steady quarter to quarter, and since most orders are paid through PayPal, I use the PayPal activity log to track which orders have been shipped,” Gwinn said.

Gwinn has been using GoDaddy for website hosting — for less than $100 per year — since he launched Reverse Logic.

“I work alone except for the six car shows a year in Pennsylvania and New York, when my daughter and son-in-law help me man the vendor booth,” Gwinn said.

He has no plans to hire any employees.

Gwinn knows basic search engine optimization methods but spent $5,000 over 2011 and 2012 with “fast-talking” SEO consultants from California and India, without results.

Reverse Logic’s most successful SEO tactic since 2010 has been its sponsorship of online car forums, for about $650 per month.

Gwinn creates posts to promote his products and engages in discussions with forum members who place orders.

“I can trace 20 to 25 per cent of sales (through Google Analytics) to popular car forum threads,” Gwinn said.

He includes key search words in the thread titles to leverage the forums’ high traffic to raise Reverse Logic’s posts in Google searches.

“It’s not uncommon to appear on page one of a Google search within an hour of posting a product announcement in one of the forums,” Gwinn said.

He has also started creating a YouTube library of product videos made on his iPhone 6 to help drive more web traffic.

Starting in 2015, most of Reverse Logic’s orders will be drop shipped via UPS from its two major vendors: Race Ramps ships standard and custom car ramps from Michigan, while ESCO ships jack stands and floor jacks from Florida.

Gwinn plans to close his warehouse used to store ramps and jack stands in 2015, to minimize overhead expenses. He will continue to ship small jack pad tools and lug bolt guide tools via USPS.

Shipping is built into the price for all U.S. shipments.

“The quality issues and shipping damage drove me crazy, so I now get them custom-made at a small Philadelphia machine shop,” Gwinn said.

According to Gwinn, Reverse Logic’s current volume does not warrant anything more than a “seat of the pants [inventory] system.”

“Ninety percent of orders are shipped out within one day of receiving an order,” Gwinn said.

Gwinn used spreadsheets for Reverse Logic’s first year and then tried a free accounting system from Australia, which turned out to be “clunky.”

He has been using QuickBooks since 2011, although it is not integrated into the backend with Ecwid.

“While I can’t search for customers by city, the auto-fill of ‘customer-likely’ address is very annoying, and report formatting is very limited; overall QuickBooks is good enough and affordable at under $150 a year,” Gwinn said.

Gwinn has recently created a YouTube channel to attract traffic from Google, and plans to enhance his modest Facebook page next year, but he has not created a Twitter account, nor a blog, and nor does he intend to.

“My competitors don’t use much social media and I get good results from the car forum sponsorships,” Gwinn said.

Gwinn minimizes expenses by working from home, without employees.

“All of my sales are online — except for those face-to-face orders taken at car shows — and I have enough business as it is,” Gwinn said.

He plans to further minimize costs by closing his small warehouse in 2015.

Gwinn provides Reverse Logic’s customer service, answering phone calls and emails any time of the day, despite this blurring into his personal time.

After receiving requests to determine the best choice of trailer ramps for a given car and trailer combination, Gwinn built a library of graph tools to help customers choose the best one for their needs. This, too, has reduced queries from shoppers.

Gwinn regrets he could not integrate Google AdWords conversion tracking into his PayPal buttons to monitor AdWords spending, which was $400 per month, until early 2014.

“It was not until I switched to Ecwid that I realized my very low conversion rate. Since then, I have not used Google AdWords,” Gwinn said.

“They were both fairly secretive and while they got Reverse Logic on many Google page one results, sales did not really increase with their efforts,” Gwinn said.

Gwinn names his biggest successes as partnering with Race Ramps and ESCO to make custom versions of their products for Reverse Logic from 2011.

This strategy has allowed Reverse Logic to successfully trade on the brand name of the vendor without having to compete directly against other resellers with the vendor’s standard products.