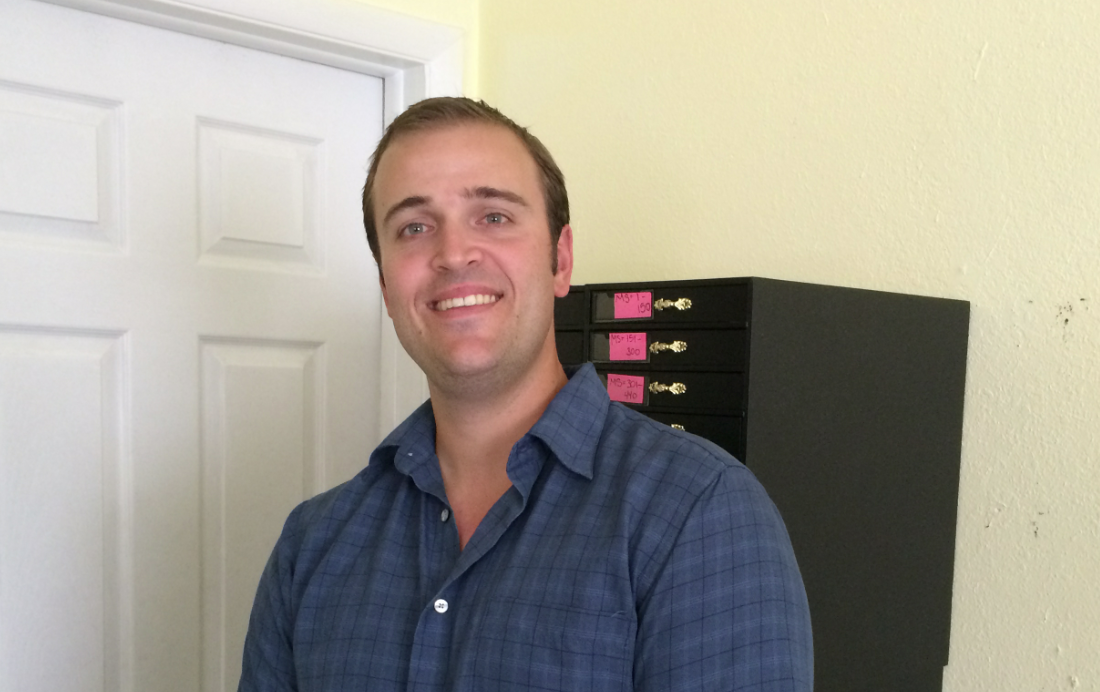 Robin Weber started his jewelry business, BillyTheTree.com, with $300, when he was just 18.

Robin Weber started his jewelry website when he was 18, with $300 from selling his high school textbooks and from tutoring classmates. He now runs a multi-million dollar business.

In 1996, at 10 years old, Weber, who grew up near Stuttgart, Germany, migrated with his parents to Belleair Bluffs, near Tampa, Fla.

Born into a family of entrepreneurs — his paternal grandmother ran a restaurant, his maternal grandfather owned a manufacturing plant, and his parents opened a website design business when they arrived in the U.S. — Weber always knew he’d run his own company.

Thanks to some of his parents’ business contacts, he started selling fashion jewelry on a drop shipping basis on his website, BillytheTree.com.

When customers proved reluctant to spend more than $100 on jewelry on his site when the recession hit in 2009, Weber expanded his product line to include pieces for $50 to $100, which sold well.

“Doing this helped me expand the business enough in 2010 to open a brick-and-mortar store in Belleair Bluffs, which could accommodate website operations,” Weber said.

He said the cart’s mobile-optimized site remains “buggy and unusable,” forcing him to make his desktop website as user-friendly as possible for mobile users.

“I don’t want to try another shopping cart with a mobile-optimized version, because I trust Network Solutions will fix it, and migration is simply a huge hassle,” Weber said.

Weber’s parents built his first website on the MonsterCommerce content management system, which provided basic templates they could customize. 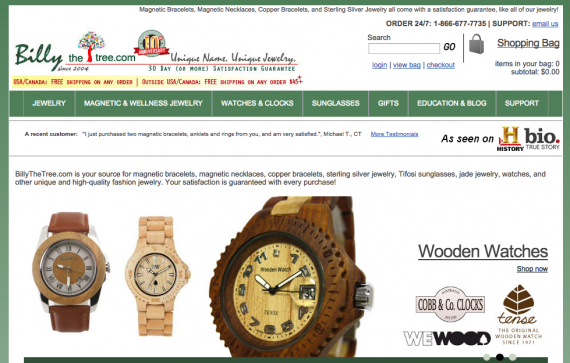 “Soon I was doing most of the design work, with my parents doing the rest; I learned Cascading Style Sheets, HTML, and JavaScript over the years,” Weber said.

His website has had four major facelifts. Six months ago, Weber revised the site navigation to reflect its growing product selection.

Weber pays 2.39 per cent to Chase Paymentech but believes the rate is higher due to hidden fees, penalties, different transaction types, and increased fees from the major credit card companies.

He is upset by the chargebacks and the disputes process and said banks should examine customers making frequent dispute claims as “there are some people who commit fraud with many different online retailers.”

“The system doesn’t discourage them from committing these abuses, and it’s my wallet that feels the consequences,” Weber said.

Weber sells jewelry through his own website, his physical store, eBay, and Amazon.

Like many online retailers with multiple channels, Weber has sometimes accidentally oversold the same item — i.e., having only one in stock but selling one each on multiple sites.

Keeping product information current, removing discontinued items, and launching new products across all channels has been a challenge, and this year, Weber sought software to address these issues.

“This is almost ready to go live after costing tens of thousands of dollars and taking eight months in development, but I’m very optimistic about what it can achieve,” Weber said.

BillyTheTree.com has three full-time employees (two in customer service and shipping, one in new product creation) and one part-time employee responsible for packing at Weber’s office and physical store in Belleair Bluffs.

“We started hiring in 2008, with the first job being a customer service position. Most of my employees have been with the company for years, so we have a very strong team,” Weber said.

He acknowledges that writing unique content and sticking to “white hat SEO tactics” can take time to make an impact, but BillyTheTree.com ranks well for its best-selling category, magnetic jewelry.

While he realizes his site’s SEO can be drastically improved, Weber won’t outsource this to SEO companies.

“Most SEO companies are unwilling to put forth the effort and charge exorbitant fees for doing a handful of meta tags. I’ve simply been unable to justify this high cost,” Weber said.

He also uses ShipWorks software, for eBay and Amazon orders.

“We ship 99 per cent of our parcels using USPS and we provide free shipping for orders over $45,” Weber said.

He will not ship to Africa, South America, or Italy after receiving orders in the first two years of the company’s history from these locations that were, respectively, 95 per cent, 50 per cent, and 45 per cent fraudulent.

“We stopped shipping to these places. Really, how much longer would any business keep shipping to any place with numbers like these?” Weber said.

Weber found it hard to secure suppliers at first.

“I didn’t fit the traditional jeweler stereotype thanks to my age, and it [jewelry] is a fairly small, closed community where most relationships are formed by word-of-mouth,” Weber said.

He attended jewelry trade shows, seeking well-connected industry figures who could help him get a foot in the door.

“I’ve fostered strong relationships with a few key individuals, who have helped me expand my list of suppliers and partners,” Weber said.

BillyTheTree.com sources magnetic jewelry, silver jewelry, and unique watch brands from American designers and other artisans globally on a drop-shipping or wholesale basis.

Approximately 40 per cent of sales comes from the website, 25 percent comes from each of Amazon and eBay, and 10 per cent from Weber’s brick-and-mortar store.

None of the company’s bookkeeping is done internally and nor does Weber use accounting software.

“I’ve worked with the same accountant for many years, and I trust him. So I simply forward him all needed information,” Weber said.

Surprisingly for a younger retailer, Weber is scornful of social media as a promotional vehicle, and refuses to devote resources to it.

Weber avoids paying for advertising or marketing that cannot offer a measurable return on investment.

He spends over $20,000 per month on pay-per-click advertising as he can see a direct and immediate rise in sales.

“However, after wasting thousands on selecting the wrong keywords and geographic areas, and accidentally choosing display network advertising, I now take my time when doing PPC,” Weber said.

Weber is frugal. He uses an inexpensive inkjet printer to print his packing slips and brochures, and refills his toner cartridges with bulk-purchased liquid ink.

“Ignore the printer companies that say refills will ruin your printer or be messy: you can save thousands of dollars by refilling ink,” Weber said.

Since 2012, Weber has enabled customers to make enquiries and place orders over the phone, 24 hours a day, through Appletree Answers, a U.S.-based call center.

“While having a 24-hour customer service line has made no significant difference to our sales, Appletree frees up my employees from answering the phone to concentrate on email enquiries, shipping, and inventory management,” Weber said.

He discontinued his live chat service after he found it slowed down his site speed and did not increase sales.

Weber cites spending almost $3,000 on a local TV advertisement to promote his brick-and-mortar store in 2010 as one of his worst decisions.

“We saw almost no sales from it after a five-week campaign. I don’t think TV works unless you have a lot of money to devote to it, and you can afford to run spots over and over again,” Weber said.

“I devoted far too much time, energy, and money attempting to get poor performers to sell. We have the flexibility to quickly switch to brands that sell, and we shouldn’t be afraid to drop those that don’t,” Weber said.

Weber said his biggest milestone to date is turning $300 into a business with more than $1 million in revenue in 2010.

He also is proud about hiring his first employee in 2008.

“To know that my efforts mean another person earns an income was incredibly rewarding to me then and is to this day,” Weber said.