Bartenders frequently ask young patrons to prove they’re over 21 to obtain liquor service. But there’s probably only one ex-bartender who has created a million-dollar business out of legitimate photo IDs.

Patrick Barnhill was born in Portland, Oregon and regards himself as having been “a geek and computer nerd forever.” 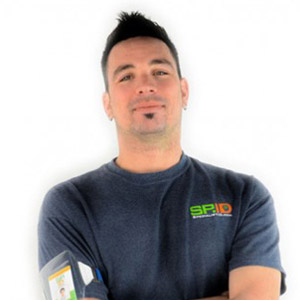 While still at Tualatin High School, near Portland, he was hired as a casual technical support for his friend’s father, Jim Gingo, whose company, TransTech Systems, was working with digital ID card printers as the Polaroid-style laminates were being replaced by the modern PVC ID cards.

Gingo flew Barnhill to Eden Prairie, Minnesota to get certified to repair the original FARGO ID card printers. Shortly afterwards, FARGO went public and was bought out by HID Global.

After graduating from high school, Barnhill moved to Florida International University in Miami to study international business, Spanish, and Brazilian Portuguese, while he worked nights at a major Miami Beach nightclub, as a bartender.

“I reached out to Jim Gingo to become a re-seller for TransTech while still a junior in college. He was very generous and offered unlimited terms to help get me started,” Barnhill said. That was the start of Specialist ID, which Barnhill formed in 2001 in his dorm, paid for by his bartending money, which was enough to carry the losses in the beginning.

The company specializes in ID badges and accessories. Its customers are government agencies, schools, universities, and large companies — ranging from NASA, FBI, to the B.B. King Museum in Mississippi. 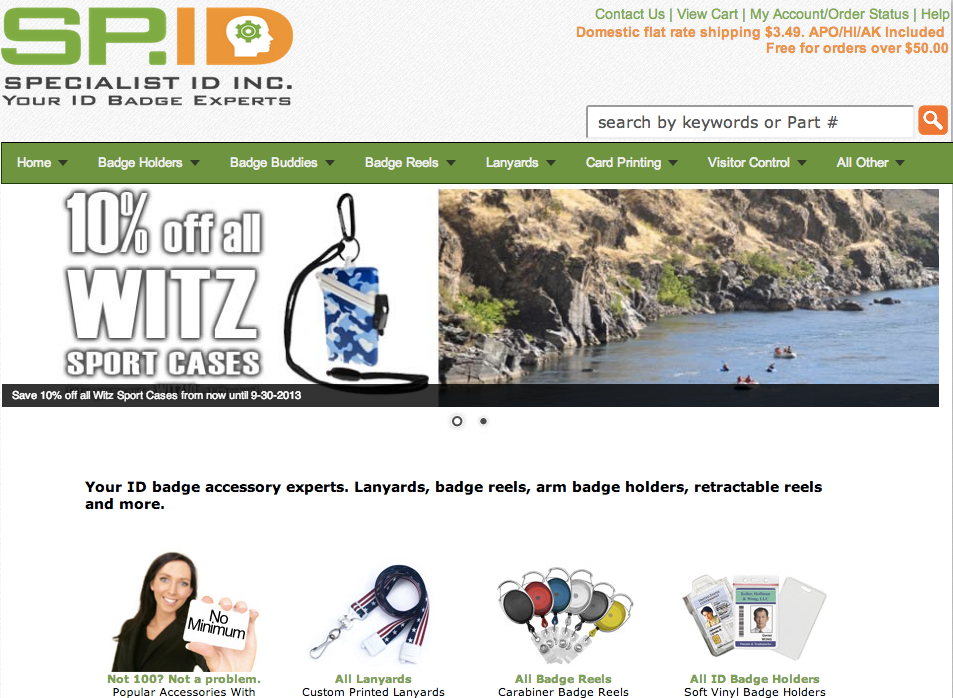 “Volusion is proactive in development and we only have to pay a small fee to reap the benefits. They have their eyes on mobile technology, too,” Barnhill said.

However, he is frustrated that he cannot modify the source code, and is particularly unhappy with its application of quantity discounts.

He has considered giving Magento a trial on a test server but the time it would take and the risk of damaging Specialist ID’s online rankings if he made the switch has made him reluctant.

“If we can make it work in Volusion, that is where we will stay,” Barnhill said.

Barnhill said PayPal’s fees are too high but he uses it because he can integrate the PayPal activity into QuickBooks with SimplePort, an integration platform, saving the time of manually posting.

“If not, we would shop around and find a better deal but it saves so much time,” Barnhill said.

“Setting up their XML templates can be overwhelming, but is well worth it. You can program all of your rules and it will know exactly how to ship any package anywhere in the world based on weight, location, or order value. It’s very powerful if you can learn to use the back end logic,” Barnhill said.

Barnhill hosts his website with Volusion (a hosted ecommerce platform), and his blog and other domains with Media Temple.

“Having a virtual server [at Media Temple] makes it easy to host virtually unlimited domains in just a few seconds,” Barnhill said.

While some would recommend against hiring family and friends, it works for Barnhill.

His father, a sheet metal and construction contractor, helped with the original construction of the ID processor; Barnhill welcomed his brother as partner in 2008, afterwards hiring the daughter of a close family friend for bookkeeping and new product development.

“Later on, her brother joined us for the warehouse, then two guys we used to play in rock bands with for video editing and content writing. Then our video editor brought in his fiancée to do our product video demos. Our mom joined us to do full-time bookkeeping, and our last hire was my neighbor for additional warehouse help,” Barnhill said

Barnhill began using Optimum7, founded by one of his college friends, for search engine optimization several years ago, to which he credits his growth.

“I have learned so much from them. Their practices are really about creating great unique content and being ahead of the curve, rather than coming up with tricks,” Barnhill said.

“By using their account when you print your Priority Mail Labels, you qualify for commercial plus pricing, which you would normally have to do 75,000 deliveries,” Barnhill said.

“ShipWorks automatically integrates with this and saves you money once you set it up. Everyone should be doing it if you ask me.”

Barnhill works only with manufacturers and distributors that invoice efficiently and accurately, and provide tracking.

“We cut out any suppliers that we have to spend time chasing down tracking, or getting prices corrected. We need to know that when we shoot off an order, it will be handled correctly and automatically,” Barnhill said.

Barnhill’s inventory management system remains manual but points out Specialist ID is only two-to-three days away from being re-stocked thanks to his suppliers always being in stock.

“Since most of our small orders are done in-house and the large ones drop ship, we can handle a lot more volume than our warehouse needs to inventory,” Barnhill said.

Barnhill doesn’t use manufacturers’ videos, but creates original content that answers the questions people have when they cannot see the items in person.

“This is our only chance to sell, letting people know why this item will work. They need to know that you actually have the item as well, as so many people are sick of getting back-ordered on everything they order online,” Barnhill said.

“This is the one we are really trying to learn. I would describe it as by the seat of your pants. Everything seems to be going up,” Barnhill said.

Barnhill adopts the same philosophy written by Zappos’ founder, Tony Hsieh in his book Delivering Happiness, where he explains the opportunity provided every time a customer provides feedback.

“Rather than treating an unfair remark as a tug-of-war, take a deep breath and reach out with genuine care, and it will be very easy to turn those people into your biggest fans. You really get to show your true colors when dealing with unhappy customers,” Barnhill said.

For small orders, Barnhill doesn’t typically ask any questions or require a return at all.

“I always hated having companies waste my time over a simple return and we really don’t want to do that to anyone,” Barnhill said.

Before Specialist ID took off, Barnhill co-founded a company to sell audio equipment. He formed a partnership with an individual who, unbeknownst to Barnhill, ran up large debts with suppliers.

“The partner ran up an account with one of the manufacturers behind my back and I had to pay $25,000 unexpectedly. The stress was immense and I had to pay it off using credit cards and help from a close friend of the family, but I settled that obligation and moved on,” Barnhill said.

The experience taught Barnhill a lesson on perils of getting into business with the wrong people.

“It really was one of those cliché moments you always hear about where persistence and perseverance makes you stronger and smarter. I am glad it all worked out the way it did but it was scary at the time.”

“After the first [partner] incident, I decided my brother would be my only partner and he has been amazing. His support and love for our business keeps us firing ideas off each other and getting excited again, every day we come to the office,” Barnhill said.