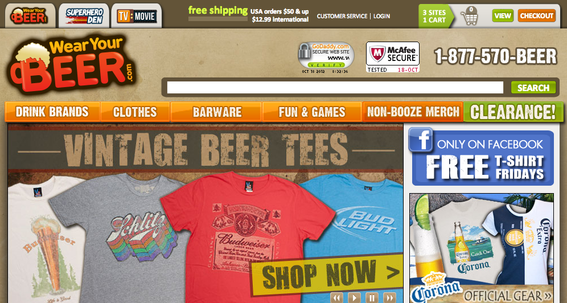 You’d think running a fledgling beer t-shirt business as a finance and marketing student would get you extra points with your New York University lecturers. But instead, in 2004, it got Roy Laniado thrown out of his dorm room. Like many universities, NYU bans running a business for profit from student dorms.

Laniado, who was born in Myrtle Beach, South Carolina, moved to Israel and then to South Africa, where his father owned a textiles company. As a child, he spent each summer working for his relatives in South Carolina in their retail store, Bargain Beachwear, which sold beach supplies and tourist necessities — as well as licensed beer apparel.

He relocated to the U.S. in 2001 as a 17-year-old and after a year working for Bargain Beachwear in Myrtle Beach, began his major in finance and marketing at New York University. In August 2004, he discovered Corona beer t-shirts on eBay — the type that were sold at Bargain Beachwear — at an inflated price. Realizing he could undercut the eBay seller, Laniado bought some merchandise from his father and began selling it on his personal eBay account.

In March 2005, NYU officials realized Laniado was running a business and forced him to live off-campus, where he ran his start-up from an apartment in Queens.

To date, with the busiest quarter to begin, WearYourBeer has recorded $1,020,00 in revenue this year. Laniado hopes it to be a $10 million dollar company by 2015.

Laniado taught himself HTML from reading books and learning online and within two weeks, had created the first website for WearYourBeer, using the open-source shopping cart osCommerce.

“At first, it was easy to use, and inexpensive. I knew a little bit of code so I used to try to customize it myself. Then, as the site grew with more products and more layers, it was becoming too complicated.”

In May 2005, WearYourBeer switched to shopping cart software CRE Loaded, which is derived from osCommerce. Inheriting many of its features such as inventory control, content management, and the ability to add admin accounts to the backend, and including many others, it has a one-time fee of $50.

WearYourBeer initially used PayPal because it was inexpensive and easy to use.

“We began accepting credit card payments through Bank of America towards the end of 2005 after realizing that not everyone has PayPal and that we needed to give more customers as many options as possible to pay.”

The business switched to accepting credit card payments through Fidelity Payment Services in 2007 because it provided the more competitive processing rate of 2.1 percent.

“But I was kicked out for running a business in the dorm building in 2005 and moved into an apartment in Queens, where the USPS truck would come and pick up orders every day.”

Two years later in 2007, WearYourBeer relocated to a nearby office and warehouse in Queens from which USPS collected items. In 2010, Laniado outsourced order management, inventory management and fulfillment to The Holcombe Group, a third party warehouse shipping center in Pennsylvania, which was recommended to him.

“In 2012, we began to use UPS for some shipments because customers wanted to receive orders sooner and we’ve been able to integrate the UPS Mail Innovations program [a hybrid model, combining UPS with USPS] within our CRE Loaded order management software.”

WearYourBeer initially used GoDaddy for website hosting because of its low cost.

“We thought they would be reliable because they are a big company but we soon found GoDaddy was not compatible with osCommerce and PHP, so it became very difficult.”

Laniado then used a small hosting company in Queens because he liked the business owner, enjoyed helping a local firm, and it was inexpensive.

“However, the servers began crashing and there were many problems, so we switched to Rackspace in 2008, which we’ve been with ever since. They are well known in the tech industry and were recommended by a friend.” 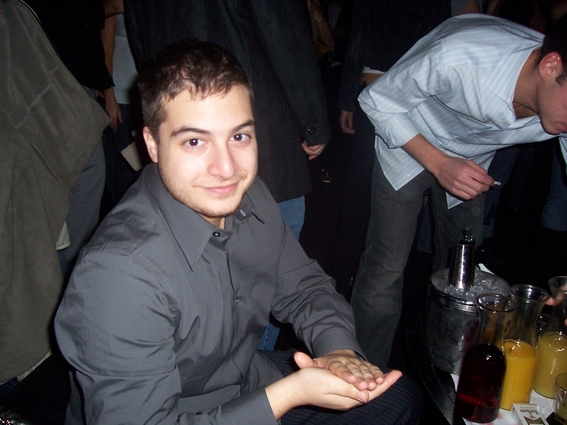 Laniado did everything himself from August 2004 until May 2006 when he opened an office and hired someone to pick and pack boxes and manage inventory.

A year later, the company moved into a new office with an attached warehouse and hired a second employee to pick and pack orders. At this time, Laniado began hiring freelance web developers to work on the website.

“As things got busier, one of our inventory managers, began helping out with customer service and, after doing a great job, began working customer service regularly, and also contributing to graphic design. And in May, 2008, we hired another guy to do picking and packing. These two people have remained with the company ever since.”

As business grew, WearYourBeer added another employee for fulfillment, so that by Christmas 2009 it had six people working in-house.

After the 2009 holidays, Laniado outsourced inventory management and fulfillment tasks to The Holcombe Group.

WearYourBeer hired an SEO agency in Chicago 2008 but had little success. It then hired a freelancer in late 2009, who worked on SEO for the next two years.

Laniado’s in-house marketing manager, who was a senior marketing strategist for an online marketing firm in New York and replaced the freelancer at the end of 2011, includes SEO amongst his responsibilities. Today, Laniado says WearYourBeer has a return on investment of $0.90 in profit for every marketing dollar spent.

Laniado says that WearYourBeer currently ranks number one for 207 keywords, and is somewhere on page 1 of Google’s organic search results for hundreds more.

Via its Pennsylvania distribution center, WearYourBeer uses a combination of USPS and UPS shipping options.

“We try to make our ‘Free shipping after $50 in the US!’ offer very, very visible. Most people stick with the flat rate shipping, but this often is upgraded to two-day shipping around the holidays.”

WearYourBeer began with just one Canadian and two U.S.-based vendors, which Laniado discovered after searching online for wholesalers, and after attending such trade exhibitions as the Las Vegas MAGIC Show and The Surf Expo in Orlando, Florida.

“Over time, as we began selling more, we have been able to buy from new vendors, some of whom had a minimum spend that we could not afford in the beginning.”

“We don’t have a real vetting process. But as long as they have good prices, products we want, and they seem trustworthy — we will research them online — we will work with smaller companies.”

For several years, WearYourBeer’s inventory management consisted of a laptop, an Excel spreadsheet, and a handful of boxes with merchandise in an apartment.

Laniado then progressed to keeping inventory in an office, and then in the warehouse attached to the second office.

“We’ve had challenges with being overstocked and having to put stuff on clearance. We’ve also been understocked at Christmas because we didn’t have proper buying reports from the past, so we couldn’t gauge how much we should buy.”

“We can respond instantly if things sell out. Our reports tell us when we are getting low on certain things. It’s all about how quickly the vendor can get us the merchandise.”

Today, inventory management is handled by The Holcombe Group, which receives the merchandise, and then organizes, stocks, and picks and packs it.

Laniado originally used an Excel spreadsheet to keep track of revenues and expenses. In May 2006, he began using QuickBooks and has been using it ever since.

Surprisingly for such a youth-oriented company, WearYourBeer has not found success with social media.

All employees help contribute to Facebook, Twitter, and other social media platforms, but WearYourBeer is concentrating on other priorities.

“We are trying to be more active on our blog, but unfortunately there is not enough time right now for content creation. We do have some stuff on Pinterest, but our activity there consists mostly of the Pinterest button on our product pages, plus a WearYourBeer page on Pinterest that we have added some products to. We don’t update nearly as much as we should.”

Laniado watches the income statement everyday to make sure nothing is getting out of hand.

“The only time costs have gotten out of control is when we have bought more styles than we sold, but then again, that is the challenge for any retailer. We’d all like to be able to buy only those things that will definitely sell.”

Laniado answered customer phone calls and emails until one of his employees, Lori, undertook it in 2007.

“Customer service remained in-house until we contracted The Holcombe Group in 2010, however Lori still does eBay customer service.”

Laniado cites two common mistakes to many new businesses: attempting to save money on hosting and waiting too long to hire employees.

“By trying to use a cheap hosting solution, we lost a lot of revenue because the servers kept crashing, which meant our site went down continually, preventing us from selling our merchandise. We should have gone for the more expensive — but better and more robust — hosting option.”

“My other biggest mistake was trying to do everything myself to keep down costs. I could have advanced my business a lot faster with more employees.”

Laniado has been delighted with his company’s solid growth.

“One day in the first summer, we went from three orders a day to 20 orders a day. It has truly been steady success from there. But when we broke a million dollars in revenue last year, that would have technically our biggest success so far.”

Laniado has also been pleased with his company’s reputation for good customer service, quality products and good prices.

“I’m pretty sure that every place online where our business has been reviewed rates us as being 4 out of 5 stars. So we are seen as being a very good business to work with.”