In the past, YouTube measured a video’s popularity based on the number of clicks it received. Last Friday the video search giant changed its algorithm — here’s the blog post at YouTube — to take the time spent watching a video into account. As a result, ecommerce sites wanting to attract more viewers to their videos need to focus more than ever on creating video content that speaks to their audiences and holds their attention.

A snappy or controversial headline or an attractive thumbnail may get a lot of clicks, but if the content of the video doesn’t live up to viewers’ expectations, the “time watched” metrics will be poor and the video’s YouTube rankings will suffer.

The update measures actual minutes spent watching video content rather than the percentage of the video watched. For example, watching two minutes of a two-minute-long video does not count for more than watching two minutes of a four-minute-long video. However, that doesn’t mean we should all rush out and create feature-length videos in an attempt to increase time-watched metrics. If you don’t have enough compelling content to create a longer video, the engagement factor won’t be there and viewers will still spend short amounts of time on a long video.

To help video creators understand their time-watched metrics, YouTube Analytics has added a statistic for each video in its “Views” report called “Estimated minutes watched.” This data enables you to compare the number of times a video was viewed with the number of minutes viewers watched it. Videos with lower minutes per view will have more difficulty being found in YouTube’s search feature with this algorithm update.

For example, if a video racks up 1,000 visits and 2,000 minutes watched, that’s two minutes per visit. Another video may receive 500 visits and total 2,000 minutes watched, or four minutes per view. That second video will score higher in the time-watched sections of the algorithm and may now outrank the first video despite the fact that the first video had twice as many views.

Interestingly, the algorithm update is related to more than your individual videos. YouTube also takes into account how long viewers stayed on YouTube after watching your video. YouTube is clearly interested in increasing its sitewide time watched metrics in its ongoing battle for eyeballs against the ubiquitous television. And its strategy seems to be working: YouTube reports that the changes have decreased time spent clicking around and increased time spent watching videos.

Similar to Google’s advice in web search, YouTube’s head of creator marketing communications, Eric Meyerson, advises us to “simply continue making the great videos your audience loves, and stay away from questionable optimization strategies.” While I agree, marketers would also be foolish to ignore the easy ways to ethically optimize their video posts.

Relevance ranking factors on YouTube are centered on the textual title, tags, and the description submitted with the actual video file. The YouTube Creator Playbook, a guide to successfully creating content for YouTube, refers to these elements collectively as “metadata.” As with search engine optimization for your ecommerce site, the goal is to use the targeted keywords at the beginning of the metadata and include a call to action. The example below from YouTube’s Playbook sums it up nicely. 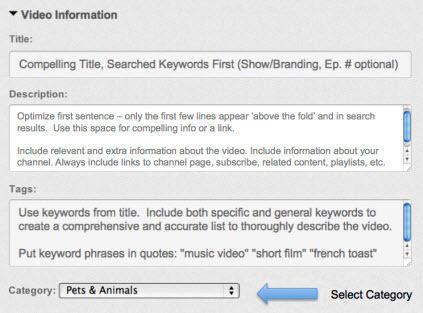 The screenshot above shows YouTube’s use of a “Title,” “Description,” and “Tags” for each video. In its Playbook, YouTube offers the following tips for each of those sections.

Video is a daunting format for many ecommerce sites. As with all search engine optimization strategies, video optimization on YouTube starts out with easily understandable basics and becomes as complex and advanced as any other marketing specialty. It is part content marketing, part video production, part SEO and part social media marketing. In reality, though, video content doesn’t have to break the bank. Skip to the “Read More” section, below, for examples of successful video campaigns from other ecommerce sites.

And before you dismiss video as too difficult, look at the audience numbers. Pew Internet Research found in May that 71 percent of U.S. adults watch videos online on sites like YouTube, and 28 percent reported watching video online “yesterday” when surveyed. More than 184 million U.S. Internet users watched 36.9 billion videos online in July according to comScore. Google sites, driven primarily by YouTube, accounted for 85 percent of those video viewers, with each viewer watching an average of 525 minutes of video.

Granted, many of those minutes are spent watching movie, TV and music content. But some are spent on how-to content, learning, and other ecommerce friendly video types. In addition, video content on YouTube can be pulled into web search results, even ecommerce search results. It’s an incredibly engaging content form for SEO as well as other marketing channels, when the videos are engaging.

And with YouTube’s rank as the world’s second largest search engine behind Google, the benefits of creating compelling video content are clear for SEO.