Imagine being told that you’ll never have a job or children and you’ll be on disability for the rest of your life. That’s what doctors told Kenyan-born Jini Patel Thompson when they diagnosed her, at age 17, with Crohn’s Disease. But the now-married mother of three proved them wrong.

She refused to accept that diagnosis — nor that kind of life — and spent the next seven years researching and testing seemingly every natural stomach remedy. Patel Thompson, whose parents had moved to Massachusetts when she was five, then Alberta when she was seven, graduated from the University of Alberta with a degree in English and Sociology. She worked as a journalist in Japan for two years, as a singer/songwriter in London for three years, and then launched a telecommunications company in Vancouver.

In 1995, Jini Patel was introduced via fax to the English-born Ian Thompson, who had an honors degree in chemical engineering. He was working in Hong Kong as an advertising agency account director. 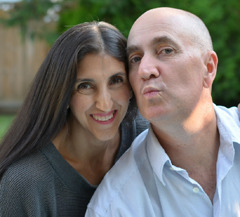 In 1997, she published an e-booklet of natural remedies she’d created to help people overcome digestive issues without drugs.

She then spent two years writing her first book, Listen To Your Gut, and launched ListenToYourGut.com in 1999. The following year, the couple set up their own publishing company after reading books about self-publishing. They put the book on five affiliate marketing sites and paid 15 per cent commission for every book sold.

The book sold 20 to 30 copies per month for the first six months, then climbed quickly to 150 books per month until the events of September 11, when sales dropped to 40 to 50 per month.

Fast forward to 2013, and the Listen To Your Gut ecommerce site — LTYG Shoppe — carries an expanded version of the original book, additional books by Patel Thompson, as well as the brands and products she recommends. They now sell about 70 Listen To Your Gut books per month. Patel Thompson has since written 15 other books and ebooks; total book sales are now around 200 per month.

They’ve learned lessons along the way.

“We soon realized we needed a customer database with more comprehensive features. We chose Infusionsoft [a small-business marketing platform], which also synced with our custom-built shopping cart. Infusionsoft, which we started using in July 2007, costs $297 per month. It took us just under one year to move over all of our affiliate and original shopping cart data,” said Patel Thompson.

In 2012, they abandoned their custom-built shopping cart and switched to Bigcommerce after reviewing online shopping cart features that offered better features and flexibility, while still using Infusionsoft for back-end marketing and lead capture.

They couple uses Global Payments via the gateway Authorize.Net for credit card transactions, with 80 percent of their customers being U.S.-based, and 5 percent each for Australia, Canada, and the U.K.

The couple has no employees.

“Both of us had multiple employees in our previous businesses, but we purposely set this business up to not have employees, but to sub-contract out to a top quality team of people who share our vision and values. They have been with us from two to ten years,” Patel Thompson

After hearing stories of websites getting blacklisted for using shady SEO tactics, they diligently learned SEO and came up with a simple formula.

“First, produce good content using natural language. Don’t cheat. Do what you’re good at and do it properly. Talk about yourself in a real way. Our WordPress blog definitely improves customer relationships and drives sales and we use tags in the blog, YouTube, and other social media,” said Patel Thompson.

The couple did hire an SEO expert to do the keywords, metatags, and descriptions for existing content, Kindle uploads, and Amazon product listings, ensuring the expert does not use black hat tactics.

“There are no shortcuts or cheats in SEO. Google will figure it out fairly quickly and then penalize your site ranking, or blacklist you. Google’s algorithm is continually evolving to outsmart the cheaters. This is a good thing, because we all want to get quality content when we do a search for something,” said Patel Thompson. 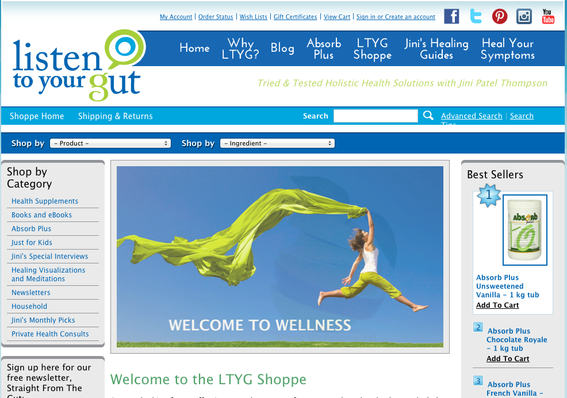 Listen To Your Gut Shoppe, the company’s ecommerce site.

Recently the couple switched their fulfillment to ProPack’s new facility in Ogden, Utah, which enables them to offer faster shipping to most of their customers.

“In early 2012, as soon as our volumes could justify it, we offered free ground shipping for all U.S. orders over $99. This resulted in a fairly swift 12 per cent increase in sales,” said Patel Thompson.

In May 2013 they plan to launch free shipping for all refrigerated items in the U.S. states that can be reached in two days, for all orders over $99. This will be a test, as they work to minimize the impact of shipping costs to their customers.

Currently they do not use QuickBooks or any other accounting software directly.

“PayPal and Global Payments provide all the revenue data we need to give to our accountant. Ian provides expenses and any additional bits and pieces in Excel,” said Patel Thompson.

In April 2013 they added Instagram, Pinterest, and Google+ and hired a social media manager — sub-contracted through Elance. They will begin a Facebook advertising campaign in June 2013.

But their biggest driver is the company’s blog.

“The challenge with social media is ensuring that you maintain the same level of customer service and use the media as a communication tool rather than a selling device. People continually post questions on our blog, Facebook, and YouTube channel. Our virtual assistant answers whatever questions he can, and only contacts me if he cannot answer or thinks I would like to take a look at the question,” said Patel Thompson.

Ian Thompson routinely contacts all suppliers, including merchant accounts, phone and Internet services, and product wholesalers, to shave dollars or percentage points off all the expenses.

“Every time our sales volume increases by 5 percent, Ian picks up the phone to see if we can get a better deal from all of our suppliers, due to increased volume. Even if a supplier isn’t willing to give us a price discount, it might move us to free shipping, or provide longer payment terms, such as net 60 days instead of net 30 days,” said Patel Thompson.

“We have been using the USB telephone jack service Magic Jack and Grasshopper — a 1-800 number which call-forwards to any number — since 2007, which we love because it can be used everywhere and makes our company look bigger to our customers. And in 2013 we added Olark live chat to our website, which instantly improved customer service response, meaning they could get a real-time response to their questions, or help with placing their order,” said Patel Thompson.

“We offer a 365-day, no-questions-asked customer satisfaction guarantee. Our return rate is less than 1 percent. Customers buy when they’re ready. When they buy, customers routinely talk about Listen To Your Gut to others and feel a closer bond with who we are and what we offer,” said Patel Thompson.

She believes word of mouth is core to the business.

“When you heal yourself, you tell everybody,” she said.

The couple never increases the price of a product unless the wholesale cost goes up. As their shipping discounts increase, due to increased volume, they pass on these savings to their customers. When Kindle arrived, they dropped all their ebook prices on their website to match Kindle’s pricing structure.

“If Ian is on the phone with a customer and they can buy something cheaper elsewhere, he tells them about it. Usually the customer still chooses to buy from LTYG Shoppe because they say they want to support what we are doing,” said Patel Thompson.

One of their biggest mistakes was letting someone manage the manufacturing of one of their products to increase distribution.

“They ended up screwing up the labels so badly, with numerous errors on the ingredient list and untrue claims, we had to return all the product to the manufacturer for relabeling. Now we never let anyone into our manufacturing process; we sign off on everything. If we license one of our product formulas, the licensee must come up with their own product name, label, and cannot disclose our relationship,” said Patel Thompson.

She said the lesson learned was to be very careful of those you outsource to and to never give overall control of the key elements of your business that affect your customers.

“We even set up split-test websites, diverting traffic to different sites to test their techniques. Nothing worked as well as what we were already doing and some of the techniques resulted in mass unsubscribes from our email list and began to damage our reputation, garnering negative scam-related comments on forums,” said Patel Thompson.

Patel Thompson says customer service is the number one success and they treasure emails from customers that say things like “My son graduated college thanks to you,” or “I feel like a new person and without drugs.”

Another top achievement is keeping the business completely automated and outsourced.

“This means we can live anywhere in the world as long as there is reliable Internet and phone. We make the same money sitting on the beach in Hawaii as we do when we’re in our office. This has allowed us to co-parent our three children and have the flexibility to cope with sleep deprivation, breastfeeding, coaching our kid’s teams, cooking unprocessed foods, traveling regularly, and indulging in our own hobbies. We have set our business up this way,” said Patel Thompson.