Mobile ecommerce sales rose 31 percent in the first quarter of 2013 as tablet-fueled, couch commerce is rapidly becoming the most popular form of online shopping with the so-called multi-channel shopper.

Data from the IBM Online Retail Index and the U.S. Department of Commerce suggested that in-store retail sales grew 3.7 percent in the first quarter, overall ecommerce sales grew 20 percent in the first quarter, and mobile ecommerce grew the aforementioned 31 percent for the quarter. This data indicates that the growth of mobile ecommerce outpaced brick-and-mortar sales growth by nearly 10-to-1 and accounted for roughly 17.4 percent of all ecommerce sales, again according to IBM. 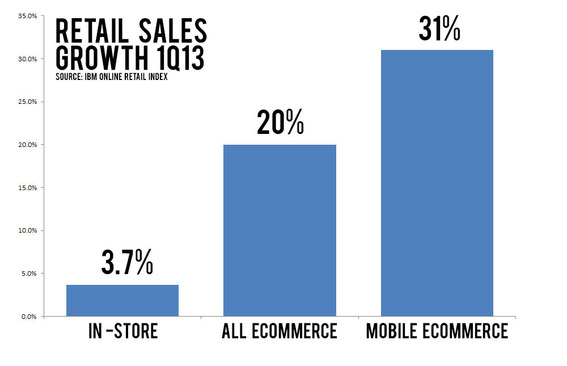 Although official Commerce Department ecommerce data for the first quarter will not be available until May 31, the agency reported that ecommerce and mail order sales combined for about $117.75 billion. Some estimates place ecommerce sales — excluding catalogs and mail order — for the first three months of this year between $32.5 billion and, perhaps, $50 billion. If IBM’s data — mentioned above — is correct about mobile commerce’s share of online sales, tablet- and smartphone-based purchases may have reached between $5.7 billion and $8.75 billion in the first quarter.

Mobile Design is a Key Factor in Growth

The growth in mobile ecommerce “reflects marketers’ ability to create a positive customer experience for consumers shopping on their iPads and Kindles, by designing for the finger and making it easier for customers to browse via their mobile devices,” IBM said in its index, apparently crediting mobile-friendly site and application design with at least some of mobile ecommerce’s success in the first quarter.

If the IBM supposition is correct and site design in a key factor in mobile ecommerce growth, online retailers would be wise to focus on responsive design and, perhaps, application creation.

Of course, IBM is certainly not the first to suggest a correlation between mobile design and mobile success. In a 2012 blog post, Econsultancy’s David Moth suggested that site design played a role in “Amazon’s massive mobile success.” Moth specifically pointed to large, touchable bottoms and calls-to-action, predictive search that made it easier to find products from a mobile device, and “attractive yet persuasive product pages.”

Tablets are the Mobile Ecommerce Device of Choice

Tablets seem to represent the sweet spot, if you will, for online shopping. The devices are mobile enough to be handled while watching television, riding on a commuter train, or waiting in a dentist’s office, but are large enough to provide a much better usage experience compared to smartphones.

“The shopping experience has evolved. No longer can we look at shopping in silos, or in terms of in-store versus online. Instead, we have to consider the convergence of these channels, as the digital consumer demands a truly digital experience,” wrote Jill Puleri, IBM Global Retail Leader in a post related to an earlier update to the IBM Online Retail Index.