Tablet-based purchases, an explosion in video watching, and shopping activity of men are among the hottest mobile commerce trends that could impact how online retailers market and sell.

About 12 percent of U.S. ecommerce purchases were made from smartphones and tablets in the fourth quarter of 2012, according to trend-tracking firm comScore.

“Tablets are the driving force behind this transaction share explosion, as the ease of use and shopping experience on a tablet device lends itself rather well to actual purchase behavior and more closely approximates the desktop buying experience than smartphones,” said comScore. “In fact, the mobile spending trend acceleration appears to coincide with the more mainstream adoption of tablets in 2011.”

This trend may impact where and how marketers promote products in the mobile channel. For example, sale offers could make more sense on tablets while price comparison offers might make more sense for smartphones.

In addition, Business Insider Australia reported that video consumption was a primary reason for tablet use in 2012 and pointed out that tablet users were more likely than smartphone users to watch video.

Given that video has been shown to significantly boost ecommerce conversions, marketers aiming at tablet users may want to consider including more and better product videos on their sites and in marketing campaigns.

A new report released this month found that men are more likely to use a mobile device to make an online purchase than are women. The data is, perhaps, counterintuitive since many online marketers believe that women are generally more likely to make retail purchases. But there is apparently something alluring to male customers about shopping on mobile devices — perhaps from a train on the commute home or from a couch during a television commercial. 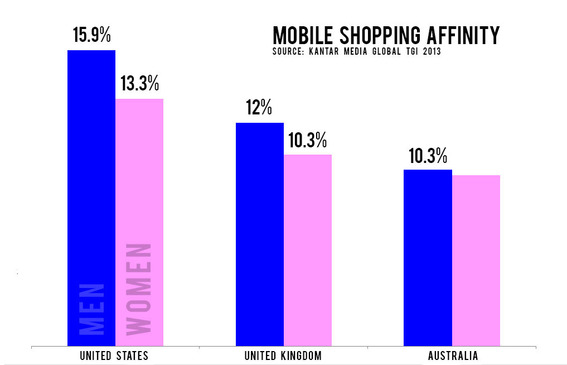 Men are more likely to shop from a mobile device than women are.