While overall online commerce showed impressive gains over last year’s Black Friday/Cyber Monday holiday, the real standout this year was mobile commerce. Compared with the same period in 2011, mobile grabbed a much larger share of both shopping and actual purchases.

Apparently, many people snuck away from the dinner table to do some shopping on Thanksgiving. Mobile use comprised 37 percent of online use on Amazon, eBay, search engines, and comparison-shopping sites, according to ChannelAdvisor, the multichannel platform provider. This compares with 19.2 percent in 2011, an increase of 92 percent.

Usablenet, which provides a mobile platform for major retailers, found that its clients that have both mobile sites and mobile applications saw traffic increase 117 percent from 2011 to 2012, while traffic for retailers with mobile sites only grew 98 percent on Thanksgiving Day, based on a sample of its platform users. The average number of mobile page views increased 74 percent over 2011. 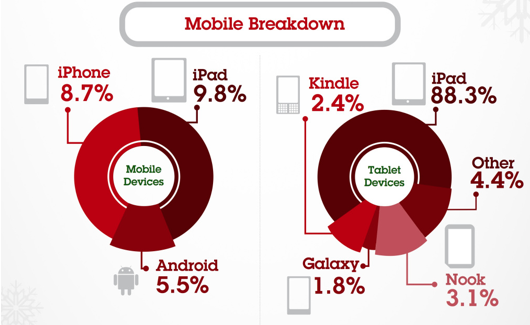 Black Friday mobile device usage breakdown, from IBM. iPads accounted for 88.3 of all tablet devices. For mobile devices generally — smartphones and tablets — iPads were the most-used device, at 9.8 percent.

Sales on mobile devices accounted for 16.3 percent of all online Black Friday sales, up from 9.8 percent in 2011, according to IBM. The number of consumers using their mobile devices to visit a retailer’s site reached 24 percent compared to 14.3 in 2011. Apple’s iPad tablet generated more traffic than any other single tablet or smartphone, and accounted for close to 10 percent of all online shopping traffic, IBM reported. Apple’s iPhone was a close second at 8.7 percent. In the tablet category, the IPad dominated on Black Friday, garnering 88.3 percent of all tablet traffic.

IBM reported that more than 18 percent of shoppers used a mobile device to access a retailer’s website on Cyber Monday, an increase of 70 percent over 2011. Purchases from mobile devices almost doubled, making up 13 percent of total Internet purchases, the company said. Apple’s iPad and iPhone were the top two devices used for online purchases, accounting for about 14 percent of total sales.

Cyber Monday was the biggest day ever for users of Amazon’s Kindle tablets, with sales from those devices more than doubling — to 2.6 percent of total online sales — from last year over the holiday shopping weekend, according to IBM.

Online shopping mall Etsy reported that on Cyber Monday one-third of its visitors were shopping on mobile devices compared to one-quarter on a typical day. Thirty percent of these visits were from tablets.

Traffic was so heavy that, on average, mobile retail sites took more than 18 seconds to load on Monday, according to Keynote, a mobile and website monitoring company. That is roughly twice the normal load time.

Smartphones were the most commonly used in-store mobile device while tablets, particularly the iPad, racked up the online page views and sales. The larger screen size of tablets makes it a more visually appealing choice.

For Thanksgiving Day and Black Friday combined, the iPad was again the most popular device for purchases, accounting for 40.6 percent of total sales for those two days. The iPhone followed, with a 36.3 percent share, while Android — both smartphones and tablets — contributed 23.1 percent. Apple devices, according to IBM, generated more than 77 percent of all mobile traffic to online retailers during those two days.

The iPad also dominated all tablet traffic with an 88.3 percent share followed by the Barnes and Noble Nook with 3.1 percent, the Amazon Kindle with 2.4 percent, and the Samsung Galaxy with 1.8 percent.

“What we are seeing is smartphones seem to be used while people are out and about shopping offline,” says Scot Wingo, CEO of ChannelAdvisor. “Tablets are being used in the evenings and when people are at home with what is called ‘couch commerce.’ Computers (as in Cyber Monday) are being used predominantly during work hours.”

Wingo adds, “This weekend proved how incredibly important mobile commerce has become, and how influential these channels are for retailers.” He advises retailers to make sure that their websites are mobile optimized to make it as easy as possible for shoppers to make purchase.