“Mobile” and “social” have received a lot of hype over the past few years. To a large extent that hype has been warranted. Sales of smart phones are setting records, and according to Alexa — the web-traffic-ranking firm — socially driven websites account for five of the ten most popular.

For online merchants, however, the hype from mobile and social has resulted in one big collective yawn. Many merchants who raced to build their mobile sites in 2010 generate a very small percentage of their revenue through that source. In addition, many merchants who have successfully collected thousands of Fans on Facebook and followers on Twitter generate only a very small percentage of their revenue from those sources.

Mobile Is Starting to Produce

Why, then, do online merchants continue to invest in mobile and social? Perhaps they believe there is a light at the end of the tunnel, and they want to get there before their competitors do. While social still needs some time to evolve before becoming a high return-on-investment channel for most online retailers, mobile is really starting to perform.

Looking at the Data

The following data from one traditional online retailer reflects trends that we’ve seen across the board with hundreds of retailers whose campaigns we manage.

This online retailer is not unusual. We surveyed many of our clients — including “Internet Retailer 500” merchants — and mobile’s share of clicks, conversions, and revenue is rising across the board. The overall percentage of PPC that mobile accounts for is still relatively small, but it is growing quickly, and these shoppers are buying.

The graphs below show trends over the last year, as mobile’s share of PPC has increased.

Graph comparing PPC clicks on "mobile" versus "desktop" between April 2010 and April 2011. 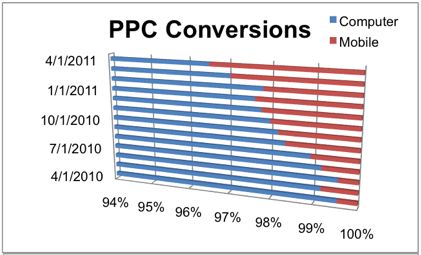 Graph comparing PPC conversions on mobile versus desktop computers between April 2010 and April 2011. 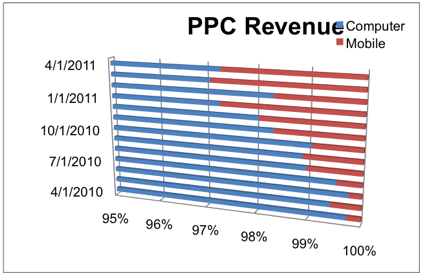 Graph comparing PPC revenue from mobile versus desktop computers between April 2010 and April 2011.

The graph above shows that mobile PPC revenue increased from around 0.3 percent of total PPC revenue in April 2010, to around 2.8 percent by April 2011.

What Every Advertiser Should Know

By default, your PPC campaigns are already syndicated through mobile devices. You can understand the impact mobile is having on the profitability of your PPC campaigns by running reports in the “Campaigns” tab within AdWords. Look at your data over time, for each individual campaign, to try to spot long-term trends.

Here are five things, below, you can do to improve your mobile PPC performance.

The data we’ve analyzed suggests that mobile users are starting to use their phones in similar ways to how they use their computers. They are shopping online, clicking on PPC ads, and making purchases from their mobile devices. While online retailers who ignore mobile may be wasting pay-per-click dollars on poorly converting traffic, those retailers who have embraced mobile by testing various PPC techniques and campaign settings to optimize its performance are starting to see results.

As mobile devices become more popular — and faster — more online shopping will be performed on mobile devices. There is no magic bullet for harnessing the profitability of mobile PPC, but this is a good time to begin allocating more of your PPC budget to that source.