Nearly 1-in-3 Adults Use Location-Based Services

According to a report released last week, 28 percent of American adults use some form of location-based service, either on a mobile device or via a social network.

The report from the Pew Internet & American Life Project — available here as a PDF — is the organization’s most extensive study of online location-related service usage to date.

In the report, Pew Internet Researchers Kathryn Zickuhr and Aaron Smith divide location-based services into three general categories. First, about 9 percent of American adult Internet users allow their social media posts or tweets to automatically include specific location information. This fact may interest ecommerce marketers, who, for example, may wish to include a similar location feature in blog comments or product reviews.

The report defined a second category of location-based services as geosocial applications like Foursquare or Gowalla, which are used by about 5 percent of adult Americans, according to Pew Internet. Multichannel merchants that sell online and via physical stores have, in many cases, been very effective in using these services to boost both real-world and digital traffic. For example, many locations of Radio Shack offer a 20 percent discount to shoppers who check in on Foursquare.

Pew Internet classified mobile phone-based driving direction or business recommendation services as its third category of location services, stating that some 28 percent of mobile phone owners — or about 23 percent of all American adults — use such services. This again may interest multichannel merchants. 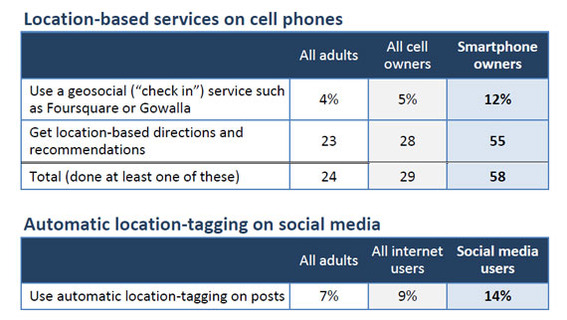 “Taken together, 28 [percent] of U.S. adults do at least one of these activities either online or using their mobile phones—and many users do several of them,” wrote the Pew Internet researchers.

Age was also a factor in location-based service usage, according to the Pew Internet report.

Pew Internet found a steep drop off in location-based service usage for Americans 50-year-old or older.

In general, American adults using smartphones were also more likely to engage location-based services than their “standard” mobile-phone-using counterparts. This is an important consideration since 35 percent of all American adults are smartphone users.

“In looking at broader uses of location-based services, we found that 55 [percent] of smartphone owners use their phone to get directions, recommendations, or other information related to their present location,” The Pew Internet researchers wrote. “This was the first time the Pew Internet Project has asked about general location-based services, which can range from GPS-enabled map services to reviews of nearby attractions using an app or a browser.”