A new open source ecommerce platform from a one-time Magento engineer claims it can change online selling for small and mid-sized merchants with a new set of easy-to-use features, mobile-by-default design, and rapid modular development — although details are scarce.

Sellvana received $5 million in seed investments last week, according to a report in VentureBeat. The Portland, Ore.-based Sellvana is believed to be a six-person company, including Boris Gurvich, who served as a developer and software engineer at Magento from January 2005 to August 2008. 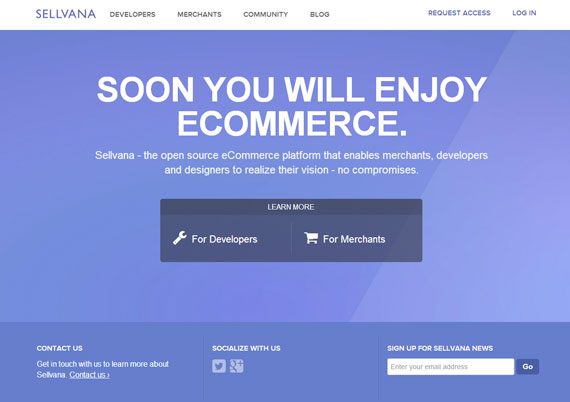 Gurvich is also the founder of Magento extension maker, Unirgy, which has developed a number of popular Magento-related products. Unirgy makes use of at least some European developers. It is possible that Gurvich and Sellvana are using similar development resources to develop this new ecommerce platform.

Familiarity with Magento, one of the most popular ecommerce platforms, and some of the marketing language used to promote Sellvana may indicate that Gurvich and his team are hoping to improve on Magento concepts in their new platform.

“The established generation of open source ecommerce platforms has not aged gracefully,” Gurvich said on the Sellvana blog. “They have not looked after themselves or their community. Give them their credit, these platforms triggered a revolution in their time, but it was a long time ago. Modern ecommerce development requires faster, more flexible, more agile solutions. Also, many members of these original, open source ecommerce communities now feel cheated and sidelined by corporate interests.

“We are building a new platform that removes all technical roadblocks for merchants, developers and designers and puts community back at the center.”

It is important to note that Sellvana is in early development, and while the company claims that several sites are successfully running on the Sellvana ecommerce platform, the names of those merchants have not been released.

Nonetheless, Sellvana is making promises to online retailers. Some of the most interesting of these include a clear focus on mobile ecommerce and a responsive design by default approach, which may help small and mid-sized Internet retailers who otherwise struggle to maintain both a desktop and mobile site.

Many ecommerce platforms leave responsivity and mobile optimization up to the theme builder. Some ecommerce platforms don’t offer any good mobile options at all. While it is not exactly clear how Sellvana will be different, the company is at least using the right phrases, if you will, to indicate that thought has been given to the rapid growth of mobile ecommerce.

Sellvana is also promising improved search engine optimization features. The company is again vague about what those features are or how they might impact an ecommerce business in a time when SEO is clearly changing. Even SEO proponents are pointing out that so-called tactical SEO is losing at least some of its value in the face of new content-focused search algorithms. (We addressed that topic, at “SEO as a Stand-alone Tactic Is Dead.”) Nonetheless, including a focus on SEO may imply that Sellvana is interested in serving small and mid-sized merchants, since large enterprise ecommerce businesses are far less dependent on search engines to generate site traffic and far better served trying to deepen relationships with existing customers.

Finally, Sellvana is also promising to be very fast loading, even when sellers have large product catalogs. Fast loading pages are more important than ever when shoppers are visiting from smartphones, and page load times are a common problem with many current ecommerce solutions.

Magento’s success is due in part to its development community and the fact that many do-it-yourself entrepreneurs built or are building their own ecommerce businesses using the platform.

Sellvana seems to be making a similar appeal to developers and do-it-yourselfers. The platform is reportedly built using the Fulleron PHP framework and is said to have a completely modular structure.

Key promises for developers include a single folder drop for themes, as opposed to the skin and apps folders required for a Magento theme, easy integrated development environment (IDE) adaptation, and an internal application programming interface (API) that is supposed to make extending Sellvana easy.

Sellvana also promised a simplified database structure, which may be in contrast to the relatively complicated entity-attribute-value (EAV) relationships found in Magento.

Sellvana, even if it delivers everything it promises, will face intense competition in the ecommerce platform market. Magento continues to grow in popularity and usage, with some in the industry looking forward to the long-promised Magento 2 to significantly improve the platform. And Magento is now an Ebay company, meaning that it has significant resources available for development.

Separately, Shopify, a software-as-a-service ecommerce platform provider with an eye toward multi-channel retail, recently received $100 million in financing from OMERS and Insight Venture Partners. The new investment should allow Shopify to significantly improve its offering.

LemonStand, which has been earning significant praise for its ecommerce platform, may offer flexibility and functionality similar to what Sellvana is proposing. And, to name just one more ecommerce platform opportunity, many are finding that WooCommerce, which runs on WordPress, is both functional and familiar.

Only time will tell if Sellvana can start a new revolution in ecommerce platform capabilities or even compete against Magento, Shopify, LemonStand, WooCommerce and many others.