One-third of U.S. Adults Own Tablets

Since 2010, the Pew Research Center’s Internet & American Life Project has been tracking tablet computer ownership in the U.S. Pew’s most recent survey was conducted from April 17 to May 19, 2013 and included some 2,252 respondents. The survey’s findings — that more than one-third of American adults own a tablet — may be of special interest given reports from Monetate, comScore, and others indicating that tablet-driven ecommerce sales might account for between 11 and 13 percent of all electronic commerce this year. 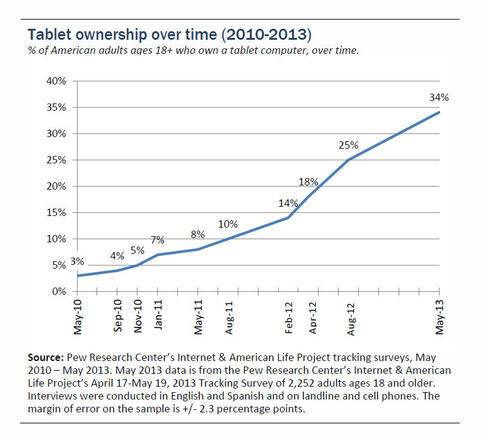 Similarly, eMarketer estimated in January of this year that tablet-based commerce might total $24 billion in the U.S. by year’s end and pass $50 billion before the end of 2015. According to eMarketer, this year’s ecommerce sales from tablets should represent more than an 81 percent growth from just two years ago.

“Unlike smartphones, which are most popular with younger adults ages 18-34, we see the highest rates of ownership among adults in their late thirties and early forties,” wrote Kathryn Zickuhr, a Pew research analyst, in the organization’s June 10, 2013 report. “In fact, almost half (49 percent) of adults ages 35-44 now own a tablet computer, significantly more than any other age group.” 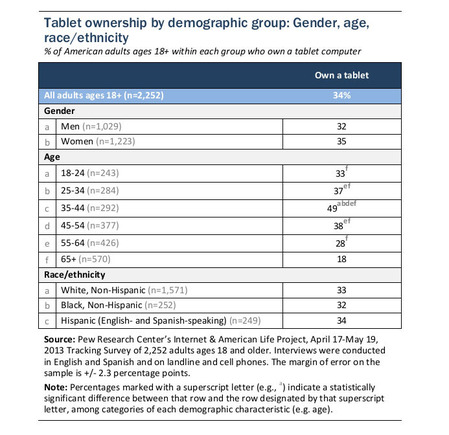 Americans between in their late 30s or early 40s are likely tablet owners.

This data may have an impact on how ecommerce merchants choose to market to potential tablet customers or which products or services to promote. It is entirely possible that other age groups, including American teens, are also making use of these tablet devices even if the owner of the device is an adult over 30. In fact, Pew also found that American households with a minor child living at home were almost twice as likely to own a tablet when compared to households that did not have a child present.

Affluence and education are also indications of how likely an American adult is to own a tablet. Pew found — as an example — that 56 percent of U.S. households with more than $75,000.00 in collective annual include owned at least one tablet. 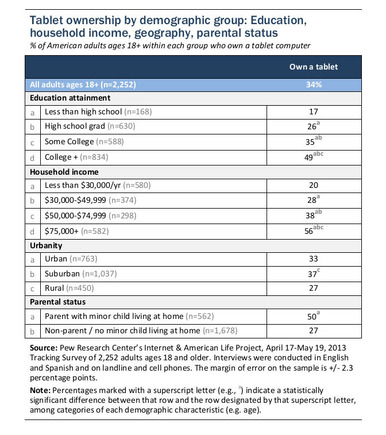 This data may also be useful to online marketers, since it may help define whether or not a target customer audience is likely to use a tablet device.

The recent Pew survey and the data it presents reinforce an already widely accepted trend in ecommerce — mobile commerce generally and tablet commerce specifically is the future of selling online.

This transition to mobile shopping should encourage online retailers to make their sites easy to use on tablets and aim at least a portion of their marketing efforts specifically at tablet owners and users.

For example, retailers should ensure that (a) store websites are responsive or adaptive, so that those websites take on a tablet-friendly format as needed, (b) products are available on marketplaces or via shopping applications, since some portion of tablet users prefer to shop that way, and (3) mobile friendly payment options — like Google Wallet, PayPal, or even credit cards stored on the mobile device — are available.

These findings may also impact pay-per-click marketing. Some online retailers use, as an example, Google AdWords to target laptop and desktop users — this is certainly a practice that should be reconsidered given the number of American tablet owners.

Video advertising may also emerge as an excellent way to reach tablet shoppers. Data from the Adobe Marketing Cloud indicated that digital video consumption on tablet devices nearly tripled year-over-year in the fourth quarter of 2012, moving from about 13 percent in 4Q2011 to 32 percent of users in 4Q2012.

Adobe believes that this amazing growth in tablet video watching represents an opportunity for digital publishers, since “tablet viewers, in particular, are early adapters who typically spend more money.”