What kind of a mind thinks through the concept of starting a retail sales business in which you have no idea what your inventory will be from one day to the next, where the inventory is going to come from or for how much you can sell it? It’s a mind schooled in the rough-and-tumble world of Wall Street finance.

It’s the mind of someone who calls himself an “investor by trade.” A doctorate in philosophy from Stanford University probably helps Founder/CEO/Chairman Patrick Byrne deal with the daily esotericism that goes with running a company like Overstock.com, which takes all the stuff nobody else wants (or is able) to sell anymore, and sells it to people all over the world on the Internet.

From one day to the next, people use the “O” to buy, sell, package and ship everything from baby clothes to plasma TVs. There is no standard size, shape, weight, cost or sales price. Life at Overstock.com is a daily game of hopscotch, Tiddlywinks and hangman, all rolled into a 12- or 14-hour work day. The staff and management of the Utah-based company have a veritable tiger by the tail. They lived, hanging on for dear life, through the seven years while the company grew from just short of $2 million in sales in 1999 to a $900-million, publicly-traded behemoth on which millions of bargain hunters depend every day.

It wasn’t like he needed a job or a second income; Byrne had been chairman, president and CEO of Centricut, LLC, and held the same three positions at Fechheimer Brothers, Inc., a Berkshire Hathaway operating company. He is the general partner of High Plains Investments LLC, an investment company located in Park City, Utah. So, the question is why get involved with a risky dot-com deal that broke all the rules? 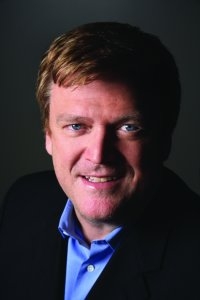 BYRNE: I saw that you could create business models on the Internet that no one had created before. I found that fascinating. The idea of applying the conventional rules of business in a whole new arena and define opportunities that didn’t even exist in the old world is interesting. The normal retail system is set up to handle massive quantities of goods, and I knew there were little pieces, little giblets, if you will, of goods that spill out of the supply chain. Jobbers work with the manufacturers and retailers to clean that spillover, and the market compensates them. I thought that we could sweep up those giblets, and put them on line as a jobber.

So, doesn’t being the producer’s janitor, so to speak, sweeping up those pieces and extending the life of a product, play off of “The Long Tail” concept that Chris Anderson wrote about?

BYRNE: Very much so. Because one of Mr. Anderson’s arguments is that the economies of production and distribution didn’t warrant producing anything for the tail. You produced things for the center. Now, there are two ways to go with that insight. One is the way we went, which is to realize that, when things do come along where the mass market would normally service them except where the quantities are too small, we could step in then and provide service in the market, sweeping those cast-off pieces up and selling them off. We wouldn’t go way out on the tail, but we would go a step farther than the mass center and the normal mass marketer.

The Internet makes it possible for companies like Overstock to communicate with the relatively small group of buyers that is looking for items that are no longer considered of mass appeal. In 1999, Byrne developed the business model in which he would buy up and warehouse thousands (eventually tens of thousands) of products and sell them at bargainbasement prices to consumers who were not willing to pay the normal retail price when it was a mass-market item. In a word, the initial problem with the concept was control—inventory control.

BYRNE: The inventory control and management and the logistics for buying for our company had to solve some problems that nobody had ever had to solve before. Our goods came as “dirty deals,” meaning that, for example, somebody had ordered the last 317 units of some weird waffle maker, and there were only 252 in the warehouse. So, the vendor throws in a hundred blenders as a make good, and that shows up all wrapped in plastic and that makes for a closeout—that’s how everybody operates. That’s the first issue. Then all the products range in size from a watch to a big screen TV. Third it’s a pick, pack and ship warehouse. Now, in a normal pick and pack warehouse you use a lot of automation, like Amazon where there is standardization in size and location of products. But in our warehouse, you have to be very flexible, with good turnaround in a situation where in one place today there might be TVs, and in the same place a week from now there are golf balls. It really took us several years to workout the kinks.

There is a common thread in conversations that a person often has with men like Patrick Byrne. That is, nothing is absolutely right the first time. Byrne is quick to say that there are things he would do differently if given the chance, even with a successful company like Overstock.

BYRNE: I would have been quicker to build out a stronger technology team. We really skimped in some areas, and we skimped on people, both the number of people and their expertise, and we skimped in the system we built. We skimped and we skimped until one day we woke up, and the day had arrived that we thought was still a year or two off. Our growth had exceeded our systems.

The actual growth curve of the company was, as Byrne calls it, “lumpy.” The growth would run up to 180 percent and then at some points it was zero percent. It fluctuated a lot more in the early days.

BYRNE: Then the growth this past year steadily collapsed. We started last year with $70 million in capital equipment trying to service a billion in sales, and that’s where we blew our gasket. We’re spending time (and money) this year sort of fixing a lot of things, and we hope to ramp it up next year.

While growth is what every company dreams of, sometimes growth can be as devastating for a company as no growth. Given the growth of Overstock in the last seven years, Byrne is quick to caution others when it comes to controlling growth and managing it.

BYRNE: We grew, even after we went public, at 100 percent a year, and it was crazy. I would have to think short term, quarter-toquarter, and try to back into our resources. I was wrong in two ways. The growth projection didn’t come out quite right; growth exceeded the projection. And when the growth kept hitting a hundred, it was hard to keep up technologically. The other thing I didn’t anticipate, and didn’t become aware of until after it stopped and everybody took a breath, was the stress it put on the organization. We never had time to train people or build the company that we wanted. We were all stretched so thin for six years. So, this seventh year has almost been a sabbatical where we sort of pulled into harbor to just fix things. We going to add two new tabs to the site. We’ll be selling automobiles, and we’ll have a Social Media tab—basically a community message board.

There was never a time in the seven years up to now when the “O” didn’t stand for overdrive as well as Overstock. There was no time to change anything to optimize systems, to retool or reschool, until a flat sales curve forced it. O’s stock fell from $40-something to the teens, and Byrne and company are retooling and reproaching the market with an even better model. Business on this scale never goes into the autopilot mode that lots of entrepreneurs dream about.

BYRNE: There is never an autopilot day. The day you think you’re on autopilot is the day you become fat, dumb and happy, and then you’re vulnerable. Somebody else can do it better.

As a very larger retailer, Overstock is a big tax collector for the states of Utah (headquarters) and Indiana, where they have a shipping center. When it comes to the matter of the Streamlined Sales Tax initiative in which Internet sellers would capture sales tax for whatever states their customer bought from, Byrne is in disagreement with the concept.

BYRNE: I think it is bad idea. Traditional retailers who don’t like the (Internet) competition are pushing the idea of the streamlined tax. I think (charging sales tax online) is unjust. I don’t think we impose the same load on the infrastructure of, say, Duluth, Minn., by sending a package there, as does a store which has a building and employees and needs services in the community. I think if you are going to do it, maybe it ought to be a federal sales tax. I’d rewrite the federal tax code to include a small flat tax and a federal sales tax.