The holiday selling season is important for many online merchants. This includes David Sasson. He is the founder and CEO of OverstockArt.com, a retailer of reproduced oil paintings. The company saw a 25 percent increase in 2010 holiday sales, versus 2009. We spoke with Sasson to see what worked and what didn’t work for OverstockArt this past holiday season.

Practical eCommerce: Give us a little background on OverstockArt.com.

Sasson: “We were founded at the end of 2001 and we are located in Wichita, Kansas. We also have an office in China and we have a small office in Israel. I tell people we’re a small multinational business.

“We deal in handmade oil paintings and frames. We keep all the product-in-stock in our Wichita facility, and we receive orders via our website and telephone. We try to ship most everything within 24 to 48 hours. Our holiday season is in November and December and it [2010 holiday season] went extremely well.”

PEC: Can you give us an idea of the size of your business?

PEC: What sort of online shopping cart do you use on your site?

Sasson: “We use Yahoo! Merchant Solutions. We customize it, but the customization is not immediately visible unless you’re a merchant or someone that’s knowledgeable in ecommerce.”

PEC: Could you give us some rough metrics on how your business grew during the 2010 holiday season versus 2009?

Sasson: “The 2009 season was remarkable for us. We had terrific growth. But throughout 2010, we grew from 2009 and so we were still expecting a lot of growth. Overall, this past [2010] holiday season, we saw growth to about 25 percent.

“In the early part of the holiday season, we had amazing growth — somewhere close to 100 percent in the November period. For December, we were actually expecting something even stronger than what occurred, but we were pleased after our breakout year. To still be able to grow by 25 percent we felt was pretty remarkable.”

PEC: What are some of the factors that you believe contributed to the growth?

Sasson: “One of the things is inventory management. We manage our inventory to where our bestsellers were in stock during the entire holiday season as opposed to last year where we ran out of a lot of our bestsellers early on.

“The next thing is improvements throughout the year to our website — improvement in navigation, improvement in the way a painting is viewed, better zoom features, the ‘view art in a room’ feature we added — all these features improved the customer experience before purchasing.

“Next is the customer service we’ve been providing. It’s caused a lot of repeat purchases. That has been a motto of ours from the beginning, and it keeps paying off every year.”

PEC: Did your conversion rate increase this year versus last year?

Sasson: “Yes, it did. It increased this year throughout the year. Virtually every month we were ahead. Specifically, during the holiday season, I believe the conversion rate itself was up 12 percent.

“We don’t normally disclose our conversion rate. Quite frankly, it’s not very high. It’s almost embarrassing. But the product that we deal in is so visual, and it’s not a traditional web-type product, so we feel that our conversion rate is always going to be below average. We don’t like to give the exact numbers. Over the years, we’ve improved virtually every year, but we’ve still got a long hill to climb, which we’re battling every day.”

PEC: Can you name two or three bestselling products that you had this holiday season?

Sasson: “Our bestselling painting almost every month is Van Gogh’s ‘Starry Night,’ and it actually usually picks up steam during the holiday season. It seems to be a very strong December product, outside of the rest of the year.

“Number two is Van Gogh’s ‘Café Terrace,’ and actually this year for probably the first time it was ahead in sales at the end of November — for the year — compared to ‘Starry Night.’ 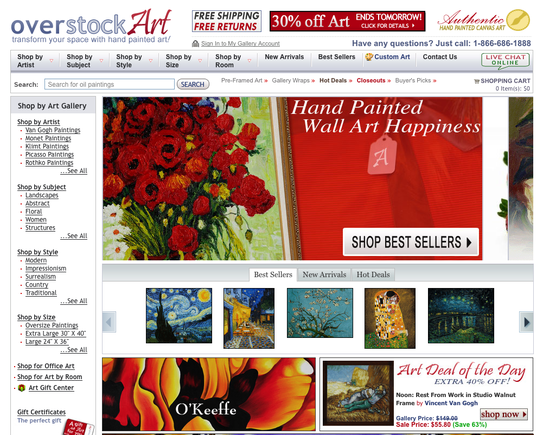 PEC: How much does a reproduced painting cost on your site?

PEC: Are they original oil paintings?

Sasson: “They are handmade oil paintings. We don’t use the word ‘original’ because we don’t want consumers to confuse it with the original that Van Gogh made. They are made by one of our artists.”

PEC: What sort of marketing and SEO initiatives did you employ over the holidays?

Sasson: “We sent out a postcard — a direct mail piece — that worked really well for us. [We sent a postcard to] everybody that purchased from us in the past few years. So, it’s a list of our own customers. It’s a very clean list and the response was very good. We don’t do that very often, but we chose to do it in November and the return was excellent. It’s one of the things we’re going to improve for next year, actually.

“Our cost-per-click marketing (majority from Google AdWords) is the only aspect of our marketing that did not perform well. We’ve seen an increase in traffic and a big drop in conversion.”

PEC: Did pay-per-click perform better the year before?

Sasson: “Yes, it did. But, we believe that we’ve had click fraud. We actually got a threat from a competitor who said, ‘If you don’t stop using our name in your ads or as one of your keywords, we will hire a click farm company in India that will click on all of your ads.’ We believe we’ve had click fraud in December.

“Google is investigating it and there are no results yet, so I don’t know. But with the low performance and the threat that we got, we are fairly confident. If you think what click fraud can do, not only are you paying for bogus traffic, but you’re not appearing later in the day because they squeezed out your entire budget for the day. So, it’s very serious.

“We believe that that’s part of the reason that cost-per-click advertising did not perform, though I will have to also say that CPC has not been a great performer for us. The increase in the cost of clicks and the competitive nature of it — it’s been worth doing but it hadn’t been a very successful marketing tactic for us prior to [the click fraud]. December was very disappointing because of the click fraud, but we were not completely happy with the results even prior to it. Let’s put it that way.”

PEC: Do you have a printed catalog?

PEC: What is OverstockArt doing on the social media realm, and how is it performing for you?

Sasson: “We do a lot in social media. We have our own Facebook page. We also built artist Fan pages on Facebook. We built a (http://www.facebook.com/GustavKlimtPaintings), and for the different artists that we carry. We manage all these different Facebook properties and we see all the communications between the different fans of our page or the other artists’ fan pages. There is a lot of activity. It’s a good place for communication and for people to get to know us.

“We also have our own blog that we post interesting articles on, some that we write, some that other people write. And we definitely have quite a bit of traffic from people that are interested in information about décor or about art or about artists and art history.

“As far as productivity, as far as direct sales dollars, it [social media] is marginal right now. It’s not something that makes us a lot of money. Traffic [on our Facebook pages] has gone up about 800 percent in the holiday season this year compared to last year. Now, it sounds really impressive in the traffic amounts, but it wasn’t very large last year and so it wasn’t that huge even though it grew up a lot. But also the close ratio is very low. It seems like the mode that the people are in when they’re on Facebook is not so much of a purchasing mode, it’s a communication mode. It’s a good place to network and have an open, uncontrolled communication with our customers, but at the same time we don’t see a huge impact on direct sales.

“We also tried Facebook ads but the results were not good so we stopped.”

PEC: Anything else on your mind today for our readers?

Sasson: “The number one advice that I have for every person building an ecommerce business is that your greatest asset is your name. The customers regard your name as a brand so take care of the customer.

“It sounds so basic and so simple, but we have a program we call commitment toward happiness. We want our customers to be happy with the art they buy and that commitment is what brings customers back to us. We’ve had over 50 percent of repeat purchases during the holiday season and we’re not a naturally repeat business. But because we take such good care of our customers, that’s why we’re seeing repeats.