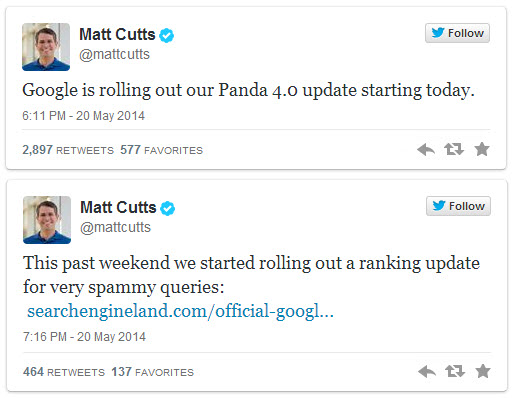 In general, thin content sites, aggregator sites, and sites targeting traditionally spammy segments of the search market were hit hardest by these two updates. But this time some major players were affected as well.

Ebay is the most widely discussed among sites negatively impacted, but others like Ask.com, DealCentral, and SimplyRecipes were also hit hard according to a report from search tools provider Searchmetrics.

Interestingly, some sites benefitted just as strongly. Other sites, such as GlassDoor, MyRecipes, CouponCabin, and BuzzFeed, appear to have improved their visibility overnight within the timeframe of the algorithm updates.

All of the sites mentioned in the top winners and losers lists are content sites as opposed to ecommerce sites. But anecdotally, based on the buzz in the SEO forums and my own review of the tens of client sites I work with, it looks as though some brand and ecommerce sites were either unaffected or experienced a lift in rankings.

On May 19, Google began rolling out its latest version of the Panda site quality algorithm. Originally released in 2011, and sometimes referred to as the Farmer Update, Panda 1.0 targeted content farms and other thin content sites. Since then, 27 Panda updates have been made, mostly in the form of monthly data refreshes.

According to Matt Cutts, Google’s head of web spam, this version of the Panda algorithm will change the search results for approximately seven and a half percent of all search queries. That’s the largest Panda-related change in Google’s search results since 2011.

Panda’s updates can take up to 10 days to roll out completely, so we’ll likely see further fluctuations in search results and organic search performance for the next week or so.

Just a few days earlier, on May 16, Google released another update. The Payday Loans 2.0 update targets some of the sites ranking for Google’s most spammy queries. “Payday loans” was originally one of the noted search queries targeted, hence the algorithm’s name.

The first course of action is to wait and plan. Major algorithm updates take some time to settle out into their final shapes. Search results will likely be in flux for a week or so more, so it’s best to busy yourself collecting data and planning for the worst while you’re waiting for the results to settle into their new shape.

Monitor your web analytics to determine the impact on organic search visits over the next week. Pay close attention to the pages that have lost or gained the most visits steadily after May 16 or May 19.

If you’re seeing a decrease in organic search performance, try to determine the exact date of change. If the decrease happens on May 16, you’re dealing with the Payday Loans update. Likewise, a May 19 decrease indicates a Panda update issue.

If you’re seeing a decrease in organic search performance, try to determine the exact date of change. If the decrease happens on May 16, you’re dealing with the Payday Loans update. Likewise, a May 19 decrease indicates a Panda update issue.

Check in with Google Webmaster Tools, as well. Take a look at the Search Queries and Top Pages reports to get an idea of the change in performance before and after May 19. It’s always a good idea to check the Messages section as well. If you’re seeing a massive decrease in organic search traffic based on a manual action or penalty, Google will alert you in the Messages section.

You can also monitor your rankings tool — in Webmaster Tools, use the Search Queries or Top Pages report to monitor Google rankings — to determine the changes in ranking position and which pages are ranking differently. You may see some pages fall out of rankings and others rank better. Analyze the differences in those pages and replicate elements from the positive movers on the pages that have lost visibility.

Make sure to cross check your findings in the rankings data with your analytics data. If your net visits and conversions are higher, you may rethink actions you were planning to take based on fluctuations in individual rankings.

What to Do If Your Site Was Impacted

After a week or two with no improvement, it’s likely that the new decreased trend in your data is the new reality for your organic search performance.

If Payday Loans 2.0 is the issue, you’re probably already familiar with the darker side of search engine optimization and which tactics are frowned upon by the search engines.

If Panda 4.0 is the issue, the solution is murkier. Panda is one of the most difficult algorithms to “fix” a site for because the solution is a nebulous “create unique, valuable content.” When the content in question reaches Google’s algorithmic definition of quality, it will be released from the influence of Panda during its next monthly refresh.

Go back to the research you did while you were waiting for the data to shake out and take another look at the pages that decreased the most sharply on May 19. Was it every page on the site? Or was it a section of specific pages? Narrow the focus so you know which pages to beef up.

Now put on your Google hat. Forget that you know your site, love your site, and are appalled that anyone could have the temerity to question your site’s value. You have to think like Google to find the answer.

If a whole section has been impacted, is there something that can be added or removed from the template to reduce the appearance of duplicate or thin content? Or do you have to slog through it page by page, injecting more uniqueness into the content?

If the whole site has been impacted, it may be time to rethink your business model. If you’re relying exclusively on syndicated content or content pulled from other sites’ APIs, there’s nothing really that makes your site different from another site that sells the same products.

Ask yourself: What makes your business different from all the others and how can you inject that unique value into your site in ways that Google will agree add value for searchers?