If you’ve got John Waldron and Sloane Bouchever in a three-way on the phone, the best strategy is try and stay out of the way and take copious notes – better yet turn on a recorder. When these two highly successful and motivated online business pros get to talking about merchants and credit card processing and tiers and basis points, it’s like listening to Trump on real estate or Spielberg on moviemaking – passion, depth of knowledge and common sense that comes in precision rapid fire. 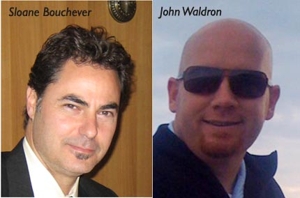 When PeC got wind that these two had a new venture to launch we setup the three-way call and asked maybe four questions and stood back. “Tell me about your new project,” elicited a three minute and forty second response from Waldron that boiled down to, merchants who are successful and who process $20,000 or more a month in credit card transactions deserve a break in the transaction and processing fees they pay their merchant account provider.

Waldron: Based on the fact that mainstream ecommerce is eight to ten years old now, and based on the way these merchants have been enrolled over time and then were able to get up and running in ecommerce with everything working, they take the attitude of “it works don’t let me touch anything and let me focus on growing the business.” But now, because of the way the (credit card processing) industry charges these merchants in a three-tier pricing structure and the fact that a lot of these merchants have grown up, they deserve a solution structured around the type of business that they really are instead of being dumped into a bucket that applies to the ecommerce segment as a whole.

So, two old business partners, who are not really all that old, decided to launch a new concept in credit card processing and online merchant account services. But, after selling e-onlinedata to PowerPay a year or so ago, Sloane went west and divided his time between Tucson and the old mining town of Bisbee, where he paints (art, not houses). John stayed in Ohio. If nothing else, however, the pair knew how to communicate via modern technology. By cell and landline phone and email the two wrote a business plan. In a fit of realistic branding, they named the new venture, simply, EstablishedMerchantsOnly.com (EMO). PowerPay, the buyer of e-onlinedata, signed-on as a partner.

Waldron: We thought, instead of getting into the market and trying to serve everybody, let’s get into the market and serve the people who we know are already doing great ecommerce processing and would definitely see a lot of value in the solution we are offering. The solution involves putting them on an interchange-plus pricing program for their credit card processing. We would show them the interchange cost and then mark it up certain basis points depending on the relationship we develop with them.

Given the age of the ecommerce industry, Waldron and Bouchever (boo-sha-vay) see middle-sized and growing ecommerce merchants as grossly overlooked and underserved. Many of the merchants now reaching maturity in the industry were startups and newbies five to eight years ago. For that matter, so was the ecommerce industry as a whole, and bankers took a dim view of this industry where people started and ran businesses with desktop computers, no inventory and little or no fiscal reputation—they never much liked “card not present” transactions. Sure you could get a merchant account with a bank, but when the transaction went through you paid two and three times what the brick and mortar merchants were paying. But what the heck, it was the only game in town.

While there once were many upstart beginners in ecommerce, there are, according to Bouchever and Waldron, thousands of successful online merchants who have done all the right things and become large credit card sale processors. They have proven themselves as legitimate businesspeople able to scores billions of dollars in new card business for the banks. But the banks have been slow to recognize the trend. Not Bouchever and Waldron.

Waldron: It is time to start looking at the other aspects of the business where the merchant can maximize the return on the sales they have generated. We see a lot of merchants who concentrate on growing the business and kind of ignore the foundation. Now it is time to say to yourself, my sales are consistently at $20,000, $50,000 or $100,000 a month, how do I maximize the return on those sales? We think they deserve better treatment and a processing cost that is commensurate with their proven ability to deliver large blocks of transactions on a consistent basis.

At issue here, are the card processing entity’s markup on credit card transaction interchange fees. Interchange fees, paid by merchant-acquiring banks to cardholder-issuing banks, are in place to cover the cost to convert a charge on a cardholder’s card to a cash deposit at the merchant’s business checking account, including cost factors like billing services, credit and fraud risk and profit. The merchant acquiring bank is at liberty to mark the interchange fees up to whatever point the market will bear. It has been a very lucrative revenue stream for merchant banks.

There are about 200 different interchange pricing levels for credit card processing. Basically processors force merchants’ transactions into three “buckets,” as Waldron refers to them: qualified, mid-qualified and non-qualified. The bucket into which the transaction falls is determined by the merchant’s rating, location of the card, the issuer, the kind of card (business, reward, etc) and many other factors. While most merchants will tell you that they pay, say, 2.20 percent for processing, that may not be, and most often is not, the case. A rewards based US Consumer card, for example, will cost much more than a standard US consumer card.

It’s tough walking around with one foot in a bucket all the time. The EstablishedMerchantsOnly.com plan has no buckets, no mass category lumping. Waldron and Bouchever’s plan is to show the merchant what the interchange rate is for the transaction, mark it up a specific fraction and call it a done deal.

Bouchever: To give you an example, a lot of businesses accept cards from other businesses. A typical non-qualified rate would be between 3.5 and 5.5 per cent. However the actual interchange cost on a US business commercial card is 2.25 per cent. So for the merchant to pay between 3.5 and 5.5 per cent is great for the processors and not terribly fair or legitimate for the merchant. So what we’re looking at with our company is a Visa business card at 2.55 per cent out the door.

When EstablishedMerchantsOnly.com launches in September there will already be a half dozen or so merchants on-board. They will have been well screened and be generating the minimum of $20K per month in transactions. Bouchever and Waldron are betting on the successful being even more successful.

Bouchever: What we have done is lower our profit margins considerably in the expectation that we are going to attract some very high quality merchants. In fact we will have several merchants with us when we open that are of a totally different demographic than what we had at the old company.

To be sure, EstablishedMerchantsOnly.com is not for everyone. It is (as the name implies) available to folks who have proven themselves credit worthy and consistently produce enough volume for the processor to warrant the investment by EMO to get them up and running in the EMO system.

What Bouchever and Waldron have done is build a model based on one irritating little fact of life in their former ventures.

Bouchever: Through the years some of the best quality merchants that we did bring on board would move on after a year or two because they felt that they deserved a better program but we just didn’t have it to offer at the time. We would lose some of our better merchants because they would go to their bank or another processor and demand the pricing. We could not meet the demand because we were just a juggernaut, signing a thousand new merchants a month. We said at the time, if we ever do this again let’s concentrate on the bigger more quality merchants.

And that is what they have done. The new company officially launches in September 2008. The website is up and available to the public now. A visit there will show you the rate structure, right up front and in plain writing. However…

Waldron: Merchants can either accept the rates we publish on the site or, if they think they deserve a better structure, they can ask for a custom platform. They can fax or email us three months of their current transaction statements and we will spend some time analyzing their business. We’ll ask them some questions about their business and then we will come with a very detailed custom proposal.

The proposal will show the merchant what they are paying now and what they would pay under the interchange-plus program proposed by EMO. The EstablishedMerchantsOnly.com system does not require the merchant to change anything but the merchant account number. The current gateway, shopping cart, and website remain as they always have been. The typical one to three month window required to get a merchant account up and operating has been shortened.

Waldron: It’s a ten-minute phone call; we’ll walk the merchant through everything and get the new account running. The merchant has no down time and no lost business time in converting to our system.

The new company is based in Columbus, Ohio. John Waldron will continue to live and work there, while Sloane Bouchever will work from Arizona.

Waldron and Bouchever are the founders of e-onlinedata, which under their management grew to one of the largest ecommerce merchant account providers in the nation, and Authorize.Net’s largest reseller. Utilizing a referral network they built of over 4,000 value added resellers encompassing web hosts, web developers and billing systems providers, e-onlinedata signed over 30,000 Internet merchants between 2002 and 2007. These dynamic eCommerce entrepreneurs also founded MerchantFocus.com and GatewayOnly.com, which continue to be very successful providers of the Authorize.Net payment gateway. In addition, they own AuctionCheckout.com, a provider of merchant checkout services to eBay and Overstock.com auction sellers.