Smartphone users want speed. It’s common sense, and the data from many sources over the years backs it up.

According to Google DoubleClick’s “The need for mobile speed” report in September 2016, most consumers expect mobile pages to load in 2 to 3 seconds.

The AMP framework delivers speed, loading pages an average of four times faster than non-accelerated pages and using a tenth of the cellular data. AMP is an open technical standard that speeds mobile page load times to “dramatically improve the performance of the mobile web.” AMP works by including structured data to mark up content, and streamlining ads and other more complex code.

In the nearly eight months since Google introduced AMP, support from the publishing world has been immense, with adoption by Pinterest, The Washington Post, Wired, and many others. AMP has also been worked into the WordPress platform, Bing’s mobile search app, and Ebay.

For mobile searchers, AMP pages are both positioned at the top of the page and tagged within search results with little lightning bolt AMP icons

Does AMP Apply to Ecommerce?

Shoppers’ desire for speedy web surfing doesn’t end with content publications. But while major publishers are swarming to take advantage of AMP, more complex ecommerce site adoption has lagged behind. Stringent restrictions on the JavaScript and other elements that can be used limit the functionality of ecommerce sites on AMP, making it a less attractive option to many major brands.

The relative importance of page speed and complex functionality is something that every brand should at least discuss. And those with less complex ecommerce sites or with smaller ecommerce catalogs should strongly consider using the AMP framework.

For an example of what is possible for ecommerce in AMP, see “Getting Started with AMP for E-Commerce” on the Accelerated Mobile Pages Project blog.

Ecommerce sites can, and should, implement AMP on their blogs and other textual content-rich pages to compete more strongly with publishers for valuable non-branded searches.

For example, Allen Edmonds, the shoe manufacturer and retailer, has some compelling content on how to care for leather shoes, but so do many gentlemen’s publications and other brands. Allen Edmonds does rank for shoe care phrases, but not as well as it needs to. Using AMP for its article content could represent a competitive advantage for Allen Edmonds’ mobile search strategy. Reaching more post-shopping customers that share its interests would also introduce more potential shoppers to its brand and could lead to an increase in sales.

Is Wired completing for the same types of traffic as your ecommerce site? No, likely not, since Wired is a technology news publication. However, think of the publications you do compete against for the rankings you want. Look at the search results you want to be competitive in and really analyze the other sites’ rankings. Many brands are competing against some sort of publication, many of which have implemented AMP.

AMP uses a subset of HTML called AMP HTML, which is really just a subset of the larger HTML standard with custom tags and properties added. There are also restrictions involving CSS, fonts, and image tagging that developers need to become familiar with.

JavaScript is allowed, but is also narrowed to an AMP JS subset of the standard JavaScript developers are used to. Workarounds and hacks are already available for functions that AMP doesn’t support — search through the open source community forums to find them.

Complex JavaScript is allowed within iframes, as well, but keep in mind that it will load after everything else on the page, and that content within iframes is not typically crawlable for search engines. In other words, don’t bother putting anything in an iframe that you want shoppers to see, or that accompanies a page you want to rank well in natural search.

Google has also introduced some interesting improvements and tools for AMP content in the last several months.

In Google’s mobile search algorithm, AMP signals now trump the signals that app indexing sends. In other words, if a site has both an AMP page and a page within its mobile app for the same thing — an individual article or a product page, for example — then Google will stop ranking the app page and instead rank the AMP page.

That makes good sense from a mobile user perspective because searchers looking for a piece of content may not want to download a mobile app just to see it. However, that will likely reduce the amount of installations and use for mobile apps. This is not a rankings change according to Googler Malte Ubl, a lead tech on AMP from Google. It is simply a swapping out of mobile app pages for the same AMP page when that mobile app page is already ranked.

On the testing and development side, Google Search Console now includes an enhanced, mobile-friendly AMP testing tool, which uses Google’s live web-search infrastructure to analyze the AMP page with the real Googlebot to test the validity of the page’s AMP markup and structured data implementation. It also includes a share button to easily send test results to those who can help discuss and resolve mistakes. 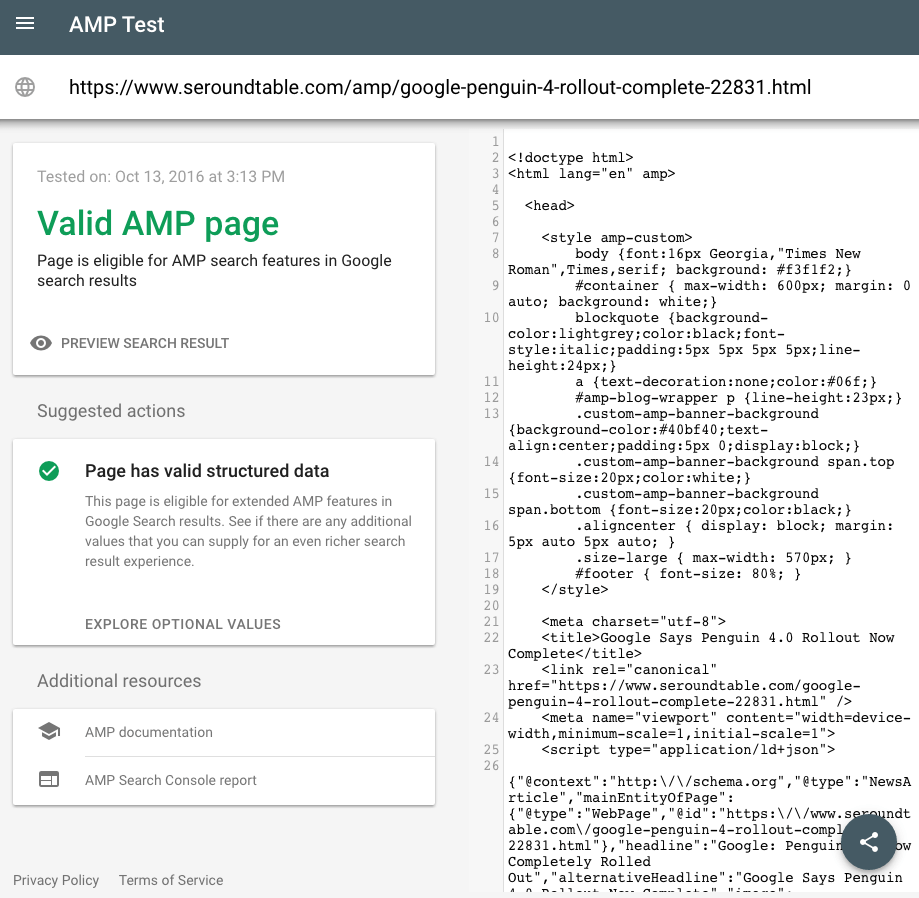 The AMP testing tool in Google Search Console includes a share button to send test results to those who can help discuss and resolve mistakes. Click image to enlarge.