Google is moving closer to an app-first mentality with its mobile search experience. This week’s Google I/O conference featured several mobile app announcements that will have ramifications for mobile search.

Google I/O is an annual meeting for software developers to learn about the latest in Google’s technologies for building applications for the web, mobile, and enterprise. While most of the announcements and sessions focused on highly technical developer information, a few provided glimpses into Google’s ever-changing philosophy around search.

Now that more than half of all Google searches occur on a smartphone, it’s time to take mobile search a lot more seriously. Google certainly is.

App indexing has only been available for Android apps, until now. A select group of iOS apps are eligible to beta test, essentially, Google’s new indexing program for iOS apps. Adding iOS on top of the already available Android functionality makes this announcement relevant to marketers wanting to reach Google searchers on 96 percent of the smartphones worldwide. 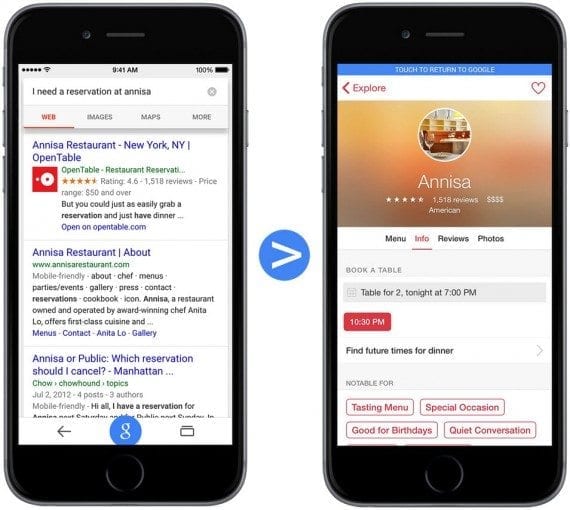 A Google search result on an iPhone for a restaurant prompts users to open the restaurant page on Open Table’s app. Source: Google Developers Blog.

It’s important to note that iOS apps will only appear for iOS users that are signed into their Google account and are searching in either the Google app or on the Chrome browser. The initial group of apps isn’t being announced, though the illustrative image in Google Developers Blog suggests that Open Table is one of the first. Look for this feature to roll out in the coming weeks.

Is this really such a big deal to mobile search? Note the structure of the search result for Open Table search result at the top left in the above image. It’s adorned with the app logo, but nowhere does it actually say that you’ll be taken to the restaurant page within the app as opposed to your web browser. The only indication that it links to an app is the callout at the bottom of the result to “Open on opentable.com.”

The prominence Google search places on the app in the search results, making it the default opening content, illustrates Google’s opinion that app experiences are better and more satisfying than website experiences.

Google is also working on its newest version of the Android mobile device platform, code named Android M. Enhanced app links is one of the new abilities in Android M. It enables app developers to bypass the “disambiguation prompt” that allows the user to choose which app or browser they want to view content in. For example, a link to Twitter in an email could be automatically opened in the Twitter app, if it’s installed on that device, instead of offering the user a choice to view the content in the Twitter app or a browser.

As an Android user, I’m not thrilled about this development. But as a marketer it signals Google’s growing preference for mobile applications. If your mobile app is stellar, and offers a better mobile experience than your mobile site, bypassing the prompt and forcing the content to open in your app may be a smart move.

It’s annoying to open an app and be confronted with a prompt for a user name and password that you can’t remember. Especially when you know your browser “remembers” that password for you. So one of the hurdles Google faces in user adoption of its “open apps from search results” paradigm shift is removing that initial password or sign up barrier on app opening. 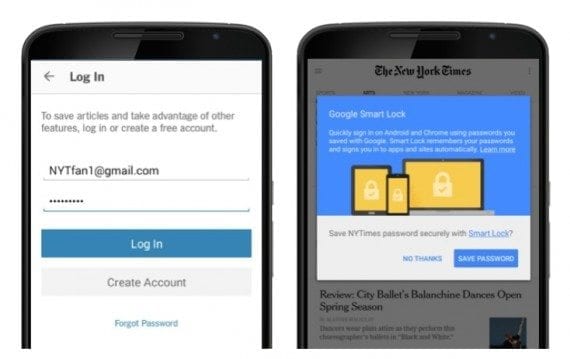 Users have the option to save their passwords to Smart Lock, and be automatically signed-in subsequently. Source: Google Developers Blog.

While not overtly related to mobile web search, the Smart Lock API makes it easier for searchers that click to open a search result in an app instead of a web page, because that app would be able to automatically log the user in instead of hitting the user with a prompt for a password he may not remember. Google wants to make the process of accessing information in apps from mobile web search as easy as possible, at least as easy as opening the link in a browser that can remember your password.

What to Do Next

All of these announcements are geared toward software developers, not marketers. But they do shed some light on one possible future of search marketing: app-first mobile search experiences.

My article entitled “SEO: Mobile Now Drives Majority of Google Searches” offers helpful next steps around optimization for mobile web search, optimization of app pages in the app stores, and app indexing. Note that I wrote the article before iOS app linking was available. So excuse any statements that refer to “Android-only” implementations.

For some marketers struggling to even develop a mobile-friendly website, the thought of adding apps on Android and iOS into the mix is overwhelming. You already have web development resources in place, so it may make sense to start with the mobile-friendly site.

However, if your competitors offer apps that rank well with their flashier mobile search results that contain app icons, it may make sense to invest in an app of your own. As with any marketing strategy, consider the potential of each program and prioritize which to invest in, rather than chasing what’s new and exciting.