Google makes periodic adjustments to its algorithm that determines organic search results. It likely does this each day, using small adjustments, to avoid large-scale mayhem that infrequent adjustments would presumably cause.

SEO professionals have called this recent drop in traffic the “MAYDAY” algorithm update, and it made waves in SEO forums last week, with site owners lamenting large drops in their long tail traffic.

Interestingly, while many are crying foul, others contend that the MAYDAY phenomenon started happening as much as a month ago, or that it can’t even be pinned down as an algorithmic change. Google hasn’t confirmed or denied an algorithm update. 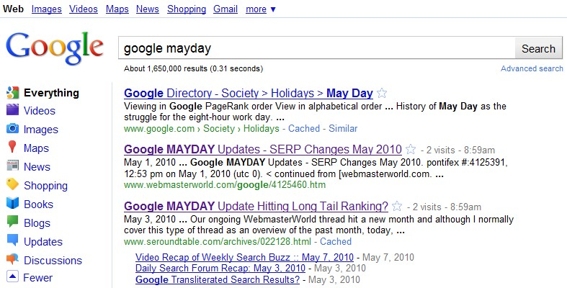 Screenshot of search results on Google for “google mayday.”

Google did update its design last week to move to the two-column search results format used by other major engines. But, a design change does not necessarily signal a sudden algorithmic update. The design change increases the likelihood of searchers using other forms of vertical search, like images and video, giving marketers who optimize for those verticals a leg-up.

When the forums fill up with webmasters clamoring about algorithmic updates and the impact on their sites, what should the average SEO or ecommerce merchant do? First, determine from the forum posts how the issue is manifesting itself quantifiably. In this case, the posters focused on impact to traffic referred from Google organic search for keyword phrases in the long tail or “fat belly,” meaning phrases of two or three words. Look for that quantifiable measure in the forum posts. If there isn’t any quantifiable data discussed, put it aside until someone chimes in with something measurable. There’s no point chasing speculation, and it’s not productive.

Second, log in to your site’s analytics and drill down to the data that the forums have identified as the impacted areas of their sites. In this case we would again be looking for traffic to two- and three-word key phrases referred by Google organic search. Analyze the data year-over-year for the affected timeframe, and compare the increase/decrease trend to prior months year-over-year. If the growth year-over -year has been 20 percent for the last six months, and the MAYDAY timeframe decreased 50 percent year-over-year, that’s a pretty clear signal.

Third, make sure to play devil’s advocate by actively attempting to disprove any theory that seems to be proven by the data. Changes in organic search traffic patterns are tricky to pin down to a single cause and effect. Concluding that a single cause is the source of the effect is a surefire way to overlook other contributing factors that may be more easily remedied. In this case, investigate single-word and four-word or longer phrases as well. Did traffic for those follow the same trend as the two- and three-word phrases? What about Yahoo! and Bing? If the organic traffic other engines sent followed the same pattern as Google’s, the cause can’t be tied to a change in Google’s algorithm. Is the traffic change actually solely organic, or did it affect other online channels? Were phrases with certain keyword stems impacted more than others?

When the data has been analyzed to determine if an issue even exists outside of the typical ebb and flow of organic traffic, the next question is always what to do about it. The first place to dig is a site’s own recent actions. Was the site down for any length of time? Does Google Webmaster Tools indicate a period of reduced crawling or increased load time? Did any URL or navigational changes occur? Was a new microsite launched? Any new features introduced to the site? Any major content updates? All of these can have an impact on SEO, and are far easier to identify and resolve than concerns about algorithmic updates.