One of the hardest aspects of search engine optimization is determining whether changes in your site’s organic search results are based on changes to your own site or external influences like algorithm changes. SEOmoz created MozCast weather report to help answer this question, and today’s addition of “Top-View Metrics” makes the tool even more useful.

The foundation of MozCast is a meteorological metaphor displayed on the home page that represents the relative change in Google’s algorithms each and every day. The stormier the icon and the higher the temperature, the more Google’s algorithms changed compared to the previous day. For example, “sunny and 57” means very little change but “thunderstorms and 101” means big changes.

The magic starts with a set of 1,000 keywords. The MozCast tool grabs Google’s top 10 rankings for each keyword and compares the changes across all 1,000 keywords to get a holistic high-level view that is then translated into the weather metaphor.

The percentage of unique subdomains in the top rankings has been the subject of much speculation for years. Google tends to prefer a handful of highly authoritative sites in its rankings, such as Wikipedia and Amazon. As fewer subdomains rank in the top 10 for those 1,000 keywords, we refer to that as a decrease in domain diversity and “domain crowding.” When more than one result from a domain crowds onto a search results page, that’s domain crowding. The more crowding and the less domain diversity, the harder it is for other sites to break into the top search results. 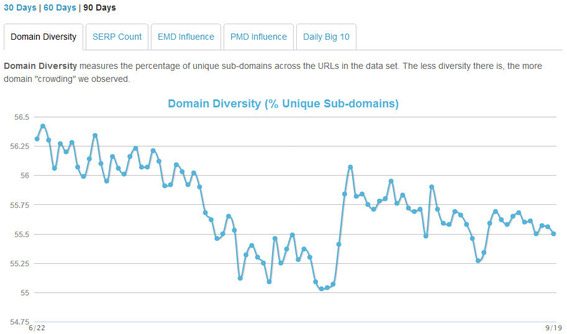 Domain diversity has steadily decreased over the last 90 days, though all fluctuations have remained within 1.5 percent. The interesting sharp uptick in diversity in mid-August coincides with Google’s seven-listing search results roll out, which affected 18 percent of searches.

Speaking of the seven-listing search results pages, MozCast also offers a SERP Count chart that tracks the average number of traditional organic results per page. At the same point that the Domain Diversity chart shows its sharp increase, the SERP Count shows a decrease to an average of 9.5 results per page with the introduction of the occasional seven-results pages. Both of these metrics taken together affect the number of spaces available for rankings. 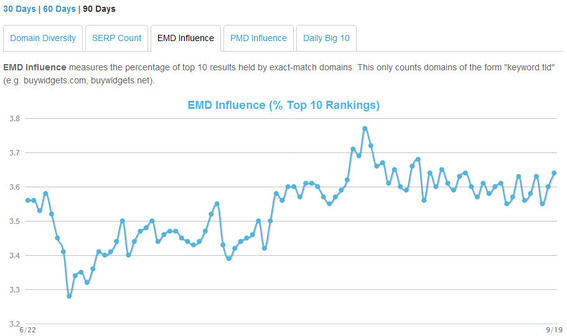 The Big 10 report tracks the percentage of page-one results dominated by the 10 most dominate domains. For example, the top three most frequently ranked domains on page one for September 20, 2012, were Wikipedia, Amazon, and YouTube. While the domains in the Big 10 change daily, the top domains remain fairly consistent. 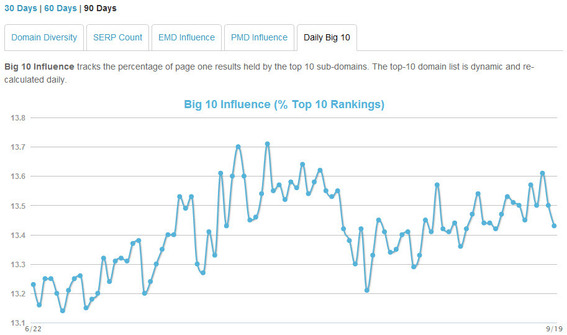 As with the other reports in MozCast, the Big 10 report gives insight into how competitive the first page of Google’s rankings will be. If the Big 10 sites are taking up 13.5 percent of the page one rankings, that leaves fewer places for other sites to rank.

Last but not least, MozCast includes an Events section that lists the major spikes in the algorithmic weather since mid-April of 2012. Don’t confuse the weather events with a timeline of algorithmic updates, such as the detailed list that SEOmoz maintains here.

Not all algorithm updates will have a major impact on the search results. For instance, on July 24, 2012, Google rolled out an update to its Panda algorithm — which I addressed in “SEO: Avoiding Penguins and Pandas” — as noted in SEOmoz’s algorithm history. However, July 24 did not register as a weather event on MozCast because less than 1 percent of search queries were affected by this update. In addition, the types of sites that the Panda algorithm targets for decreased rankings typically have shallow or duplicative content, low quality signals that wouldn’t affect the sites that the MozCast formulas are based on.

The next time your site’s organic search performance changes unpredictably, add MozCast to your collection of tools for diagnosing SEO issues. If Google’s algorithmic volatility is to blame, MozCast may be able to point you in the right direction.