When a seller uses Amazon’s Fulfillment by Amazon program to store inventory in Amazon fulfillment centers across the U.S., that placement of products can create a tax “nexus” — a connection — which requires companies doing business in a state to collect and pay tax on sales in that state.

Amazon continues to expand its network of fulfillment centers into additional states. Amazon uses this increased network to distribute FBA products, reducing the shipping distance between products and customers. Because FBA sellers do not have a say as to which fulfillment centers will house their products, it is critical for sellers to understand the sales tax implications of using FBA.

Over the past 10 years that Amazon has offered FBA services, sellers in general have not addressed the potential underlying sales tax liability. Through my interaction with thousands of Amazon sellers, I have seen two seller perspectives about sales tax nexus:

Unfortunately, both perspectives are wrong. Amazon has fulfillment centers in more than 20 states as of this writing. At least 18 have indicated that the in-state presence of FBA inventory constitutes sales tax nexus for a seller.

(It’s worth remembering that online sales tax liability extends beyond FBA inventory. Many states that don’t have Amazon fulfillment centers have stated that online sellers are responsible for paying sales taxes if they ship products to customers located in those states. And a seller’s own facilities — warehouses, offices, call centers — can create a tax nexus, as well.)

While an FBA seller may ship product to several Amazon fulfillment centers, the movement of that inventory by Amazon to other locations creates complexity for sellers tracking their sales tax responsibilities. Certainly Amazon provides sellers with a point-in-time snapshot of where their FBA inventory resides. But Amazon doesn’t provide historical details on which states have held a seller’s FBA inventory, to help those sellers access their sales tax exposure.

One option to help with this is A2X Wherestock, a third-party service. It generates reports to analyze how quickly an FBA seller’s inventory will be passed around various Amazon fulfillment centers.

Using A2X Wherestock data, I examined the 18 states where Amazon had fulfillment warehouses as of September 2016 — Arizona, California, Connecticut, Florida, Illinois, Indiana, Kansas, Kentucky, Maryland, New Jersey, Nevada, Ohio, Pennsylvania, South Carolina, Tennessee, Texas, Washington and Wisconsin. A2X research revealed that 90 percent of FBA sellers have or have had FBA inventory pass through at least 14 of these states. About 25 percent of sellers hold inventory in Illinois and Kansas (two of the four remaining states), while very few have had inventory in Connecticut and Ohio, a new Amazon fulfillment center state.

Paul Grey is A2X’s executive director. He told me that “early on, inventory sent to FBA tended to remain in a small number of states. In the last couple of years, FBA has accelerated its distribution of products across the country.” 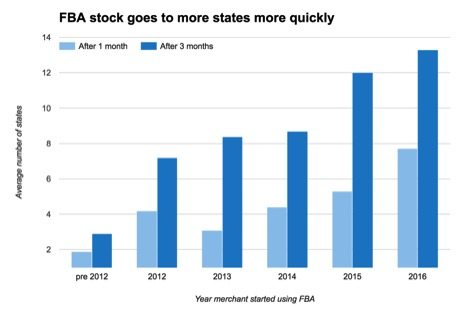 In recent years, FBA has accelerated its distribution of products among fulfillment centers. Source: A2X Wherestock.

In 2016, individual states became much more aggressive with sellers regarding FBA-triggered sales tax nexus, including auditing and penalizing these sellers for years of not addressing liability. FBA sellers should therefore consult with a tax attorney, and make the necessary adjustments to collect and remit sales taxes. The liability will only grow, in a time when sellers need to be focusing on the ever-changing competitive landscape of Amazon, not auditors and lawyers.