Social media and organic search work hand in hand, but not in the way most people think.

What Is SERP Domination?

A form of reputation management, SERP domination refers to the control of as many ranking slots on the first page of search results as possible with a brand’s own content. To promote diversity in the search results, the engines favor including a variety of domains. Even on a purely branded search, which the brand’s own domain should rank number one for, some portion of the first-page SERPs will feature other domains.

The more content a brand controls on those other domains, the more likely searchers are to choose one of the brand-owned results, and the better the brand can control the messages that searchers see in the SERPs.

Social media sites like Facebook, Twitter, YouTube and Google+ rank the strongest across all industries. For example, Facebook and Twitter profiles rank on page one in Google for brand searches for everyone from The Gap to TigerDirect to custom hula-hoop e-tailer We Sell Hoops. Other social sites rank strongly for specific niches, like Pinterest for food and crafts, and Polyvore for fashion. These social sites all work extremely well in the quest for SERP domination, offering marketers the chance to control or at least strongly influence the messages their customers see associated with their brand in the search results. 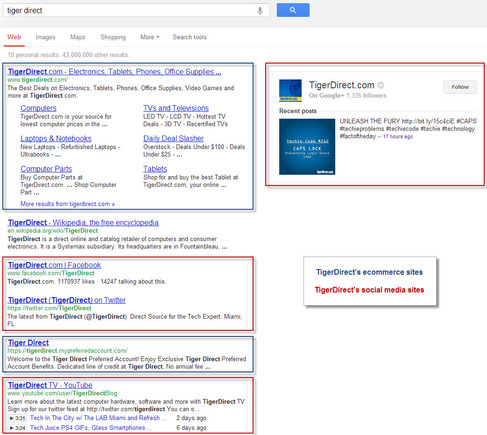 Of particular interest in Google is the Google+ Knowledge Graph feature at the top right of the SERP. TigerDirect achieved this digital billboard by claiming its Google+ page and populating it with some of the very same content it shares on Facebook. In return, Google displays its profile image, its recent posts and a follow button directly on its branded SERP. I know that Google+ is seen as a low priority for many businesses due to its small audience. But how much would you pay for this real estate? It’s definitely worth the time to share content already generated for Facebook and Twitter to Google+ for this opportunity. 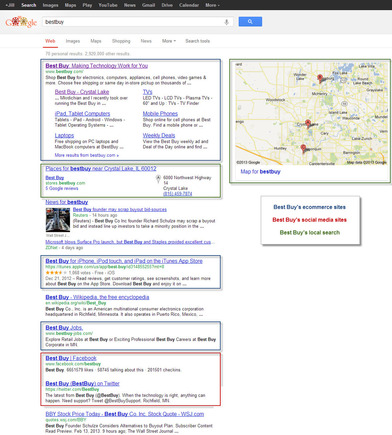 Another major electronics retailer, Best Buy, also has SERP domination well in hand. Because it also has brick-and-mortar stores, Best Buy also has the ability to control the local search real estate noted in green. But as a larger brand that is publicly traded, it also has to share the SERP real estate with news and stock results that it cannot control.

On the Google+ front, notice that Best Buy lacks a Knowledge Graph feature like TigerDirect. It would display just below the map if it were available for Best Buy. Interestingly, Best Buy has claimed its brand’s Google+ profile and posted a logo for the profile image, but hasn’t shared anything. As a result, Google has nothing of value to display on the SERP and omits the feature.

The other interesting thing about Best Buy’s branded SERP is the presence of its iTunes mobile app. Google Play’s apps for Android and iTune’s apps for Apple represent yet another opportunity to draw customers into brand-owned content and push content from other sources off of page one.

TigerDirect’s store-branded credit cards and Best Buy’s external job site serve much the same purpose in the SERPs. However, beware setting up tangential domains just to host branded content as these will more typically just siphon off link authority that could be accruing to your primary ecommerce domain instead.

While it’s possible to control a majority of the search results on page one, total domination is unlikely based on the engines’ focus on diversity. Google calls its algorithmic component “Query Deserves Diversity” or QDD.

QDD is Google’s way of ensuring algorithmically that a single brand or site doesn’t completely lock up the search results, especially with generic or non-branded search phrases like “laptops” or brand+keyword phrases like “Best Buy laptops.” With a purely branded search phrase like “Best Buy,” searchers expect to see a preponderance of Best Buy-branded content. But when other non-branded phrases are included in the search query, the QDD aspect of the algorithms includes more and more diversity. So the brand’s natural desire to own more ranking real estate with its various owned pages actually conflicts with Google’s goal of QDD.