Bitcoin, the best known of several virtual payment currencies, has made inroads into mainstream commerce, including brick-and-mortar retailers. Some ecommerce sites are already accepting Bitcoin and if you are considering joining this group, here are some things you should know.

While Bitcoin is the best-known virtual or digital currency, others exist. Litecoin, Worldcoin, and Dogecoin are also virtual currencies that are gaining traction. See “10 Bitcoin-like Cryptocurrencies” for more providers.

Consumers buy digital currency from several online exchanges using credit cards or wire transfers. Once purchased, “coins” are stored in an online “wallet,” which can reside on the exchanges or on a users personal computer. There are currently 12.3 million coins outstanding, and ownership is concentrated amongst a relatively small group of individuals. The total supply is capped at an arbitrary limit of 21 million. There is a limited number of Bitcoins, in other words, which is essential for its acceptance and stability.

Bitcoin purports to offer customers greater privacy because users do not have to provide personal credit card information. They don’t even have to give their address if they are digitally downloading products and services like games, music, or software. The anonymity is what has law enforcement agencies worried because criminals have flocked to digital currencies to buy and sell illegal goods and services and launder money.

China, which has a very active Bitcoin market, recently banned local financial institutions from dealing with Bitcoins, causing the market to lose half its value.

Those ecommerce merchants that accept Bitcoin are selling products that attract younger millennial consumers who are comfortable with cutting edge technology. Overstock.com, which began accepting Bitcoin payments in December 2013, is the largest online merchant to accommodate digital coins. Another site that accepts digital currency is BitcoinShop, an Amazon-like mall that accepts only three crypto-currencies as payment.

Cory Vines is an apparel merchant that just recently started accepting Bitcoin. Founder Daniel Lieberman says he did so because some customers requested it, but more importantly it allows Cory Vines to differentiate itself as the only active wear retailer to accept Bitcoins. It also allows the few customers who only shop with digital currency to buy from Cory Vines. Lieberman adds that the fees are cheaper than those from credit card intermediaries, and his company gets paid much more quickly. 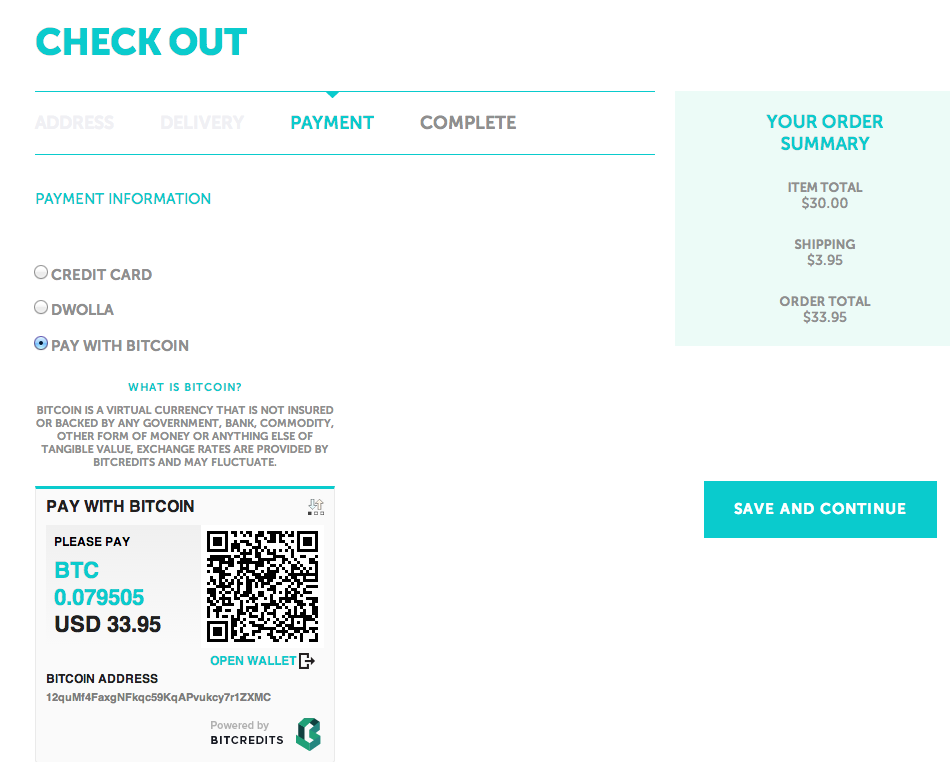 Cory Vines uses Bitcredits, a new Canadian-based Bitcoin payment processor to handle its Bitcoin payments. Bitcredits charges .9 percent per transaction for its services. Lieberman acknowledges that he may lose money on returns based on price fluctuation, but he believes the risk is manageable. Lieberman thinks his sales will increase as a result of accepting Bitcoins and cites the example of Overstock.com, which saw $1 million in Bitcoin revenues in one month.

Other digital currency payment processors are: GoCoin, Coinbase, and BitPay.

What would really make digital currency mainstream is increased use by consumers. This would eliminate having to purchase or sell Bitcoins on exchanges, as Bitcoins would be the currency, without a need for exchanging. Earlier this year, SurveyMonkey conducted research on Bitcoin awareness and use. In an admittedly unscientific survey, SurveyMonkey found that while 64 percent of respondents have heard of Bitcoin, only 11 percent have used it. Fifty-four percent stated that they were not likely to use Bitcoin in the future.

While there is no rush to offer virtual currency to customers as a payment option, if your products and services attract those who are technology early adopters, you may wish to investigate this alternative.