Editor’s Note: Each month we highlight how an ecommerce business uses social media. This is the second of the series.

I hail from the great state of Mississippi. Not only is my native state noted for its arts and culture, it is also the home of a very successful, long-standing ecommerce site, The Mississippi Gift Company (MGC). 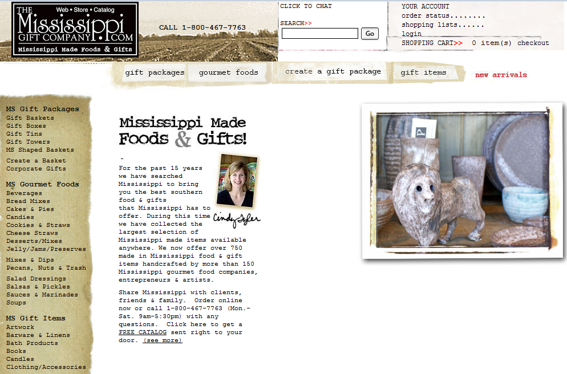 The site sells, predictably, Mississippi-made products. It has the “largest selection of Mississippi made items available anywhere,” carrying more than “750 food and gift items handcrafted by more than 150 Mississippi gourmet food companies, entrepreneurs and artists,” according to its About Us page. Items available on the site include such unique delicacies as Asiago cheese straws, muscadine jelly, and my favorite, Bacon Cheeseburger Bloody Mary Mix.

As much as I would like to focus on food, the purpose of this article is to examine the ways The Mississippi Gift Company is using social media. The answer to that question can be found at the bottom of every one of its web pages. 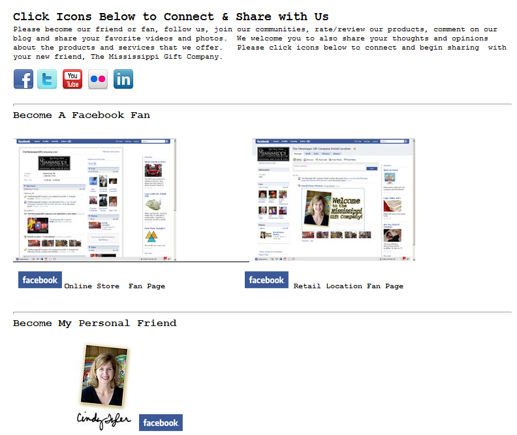 MGC maintains two Facebook fan pages, one for the online store and one for the brick-and-mortar retail outlet. In addition, the company’s president, Cindy Tyler, includes an invitation to “friend” her personal Facebook profile.
The online-store has nearly 2,000 Facebook fans and is routinely updated with news about the store, suggested products and store-related events. The page serves not only as a social media outlet into Facebook, but also as a hub connecting visitors and fans to the other aforementioned social networks.

Though MGC has a presence on Twitter, I was disappointed to see that it was mainly used for broadcast purposes and not interaction. In my view, to constrict the site only to one-way communication limits its robustness and usefulness. MGC would do well to learn a lesson from Dell’s Outlet Twitter page and provide a more personal level of interaction.

MGC has made some use of YouTube. At the time of this writing, four videos had been uploaded. Where MGC has made extensive use of video, however, is on its own ecommerce site, where it has its own video page consisting of a number of consumer-submitted videos. In some cases, videos come from vendors, while others focus on local tourism. There is even a video of Faith Hill singing “Mississippi Girl.”

I applaud MGC’s approach, but would encourage it to mirror the videos on its YouTube channel. Most of those posted come from YouTube anyway, and when you consider that YouTube is now the second largest search engine (behind Google, its owner), it makes sense to connect to the videos there as well.

Similarly, MGC has a presence on the photo-sharing site Flickr, though the number of photos present is few, and uploaded nearly two years ago. A Flickr group has also been set up, but no images appear there currently.

Mississippi Gift Company maintains a blog using the Google Blogger platform. The site is updated every week or so, and seems to primarily focus on products. The blog is not integrated into the ecommerce site itself, which is something the company may want to consider doing in order to increase readership and interaction.

The site includes a few more good ways to share. Its “Connect and Share” page contains a link to Ms. Tyler’s LinkedIn profile. And, each product page offers a rating and review function, as well as social sharing.

I commend Mississippi Gift Company on its use of social media. While not every channel is being actively maintained, for the most part it is making a valiant attempt to incorporate social media into its marketing mix. If I were grading the company on how well it has accomplished that task, I’d have to give it a solid B+.

With limited resources in terms of time and personnel, it’s often difficult to be everywhere at once. There are only so many social media “plates” that can be spun at any one time. If MGC faces such constraints, it should consider paring down its social media involvement only to channels that can be actively maintained.

It is good that the company has distinguished its use of various channels for certain things. Facebook is the social media “hub,” while its blog is focused on conversations around products. Not only that, MGC’s interest in gathering consumer-generated content is commendable, as well.
I have many reasons to love Mississippi. The Mississippi Gift Company online retail store and its use of social media offer me just one more, serving as a good model for any small ecommerce merchant to follow.