My social media journey started with blogs, then LinkedIn, MySpace, YouTube, Facebook, a few other social networks, social sharing and bookmarking sites thrown in, then Twitter and now, Plurk. Sound familiar? How the wheels of social media evolution do turn. 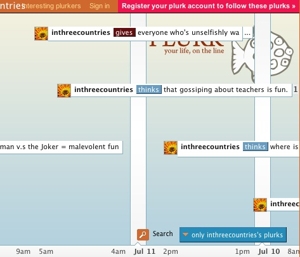 It’s hard to keep up. After all, who has time? Once you get locked in to a particular social networking site or application, why move on to the next newest and shiniest one that comes along?

Those were questions I was asking myself, but only to justify my unwillingness to stay in touch with the current state of social media affairs.

For example, I’ve been dragged kicking and screaming into Plurk. And you know what? I like it. The threaded conversations have a familiar feel, but the time-lined interface is totally new (and cool). I’m not too keen on “karma” so accruing “points” doesn’t mean that much to me. Being able to more easily follow conversations though? Yes! Plurk beats Twitter hands down.

In fact, I think the only thing Twitter has going for it now is that it was first to market. Its performance leaves much to be desired, it doesn’t have on-site notification of new followers and the conversation thread is not as easy to follow. You have to constantly click between tabs to see who’s replied or direct messaged you.

Charlene Li and Josh Bernoff, in their ground-breaking new book, Groundswell, make this observation: “Online entrepreneurs are highly competitive, and speed can create a dominant edge because whoever gets to an idea first gets first crack at the visitors (and the traffic). The result is an evolution of new ways for people to interact, moving forward at a blistering rate.”

They go on to say, “Online, people can switch behaviors as soon as they see something better. It’s the force of these millions of people, combined with the rapid evolution of new technologies by trial and error, that makes the groundswell so protean in form and so tough for traditional businesses to deal with.”

My point in quoting Groundswell is that, online, things change quickly. If you fancy yourself a social media early adopter, you might as well attempt to keep up. New and better devices are constantly being built. As such, it’s important to be first to market, even if the product is not quite ready for prime-time, as in the case with Twitter.

I’ve given up on getting stuck in a social networking site/application rut. Might as well try to keep up.