InkJetSuperstore.com and Wrigleyville Sports were once losing customers and sales. Now they are both successful and growing. In fact, just prior to a recent Practical eCommerce webinar, InkJetSuperstore.com CEO Ilan Douek spilled the beans about his prior day’s order volume. It was more than 1,000 orders; and who wouldn’t want that? 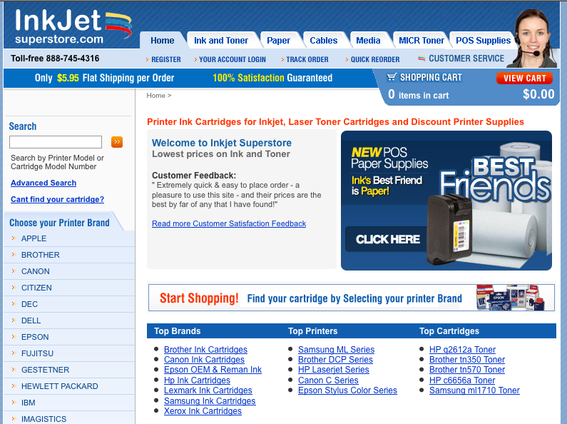 InkJetSuperstore.com is the largest and most profitable printing supplies e-merchant in a category dominated by multi-channel office superstores. The company serves more than one million business and individual customers in the U.S., Canada, and the U.K. According to Douek, InkjetSuperstore.com has enjoyed 40 consecutive profitable quarters and double-digit growth annually. But business wasn’t always so good.

Ten years ago, Douek launched InkJetSuperstore.com. As the business started to grow it encountered a number of technology-related problems that adversely affected customer satisfaction and sales. The company had adopted several different business applications to manage key business processes. These applications included QuickBooks (for accounting), the Miva shopping cart, UPS WorldShip (for shipping), ACT! (for client relationship management), and Constant Contact (for email communications). But the applications were not integrated, and Douek and his team spent hours manually importing and exporting files between them. And they couldn’t achieve true, big-picture visibility across applications.

His staff struggled with order processing issues related to volume and manual fulfillment, which impeded cash flow. They were also manually processing drop ship orders, returns, and refunds, which led to frequent customer complaints. InkJet Superstore’s website and inventory were not synchronized in real time, which made managing 6,000 SKUs difficult at best. Worse, the in-house server frequently crashed and Douek had no budget for an IT staff. As a result, InkJetSuperstore.com was losing customers and sales. Douek realized he had to do something because his technology infrastructure was damaging his business.

In 2005 InkJetSuperstore.com moved to NetSuite, the all-in-one SaaS solution. This addressed the IT issues, while enabling Douek to improve customer satisfaction and sales in entirely new ways. Application integration was no longer a problem and order fulfillment became automated. His staff no longer had to import and export orders between applications because the NetSuite’s package includes accounting, shopping cart, email functions. In addition, real-time inventory is tied to the webstore so customers are presented with valid information about product availability.

“We are now able to take orders online, over the phone, via Live Chat, and in person via will-call at the warehouse,” said Douek. “We are consistently achieving higher customer satisfaction ratings than our competitors.”

On the marketing side, Douek said he is now able to send targeted emails on overstock items to buyers based on previous purchases. He is also using coupons extensively to offer special promotions and free shipping. InkjetSuperstore.com is also able to take advantage of comparison-shopping engine feeds and has launched a social media-marketing program that includes Facebook, Twitter, and a blog. 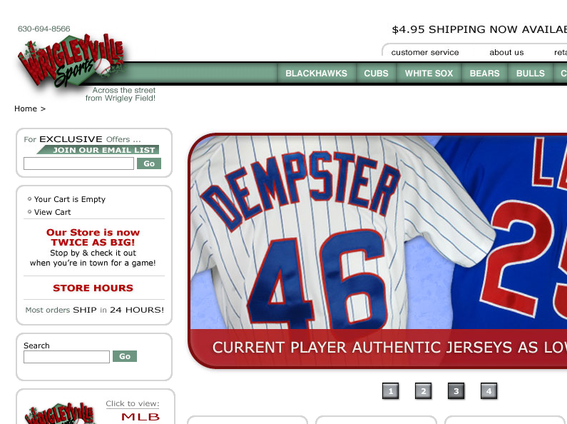 Wrigleyville Sports began as a storefront–you guessed it–across the street from Wrigley Field in Chicago, in 1990. The store sells all sorts of licensed Chicago-related-sports memorabilia, including tee shirts, leather jackets, caps, key chains, and a lot more. Like many storefronts Wrigleyville Sports expanded to the web because its management team realized there were fans all over the world that couldn’t or didn’t want to travel to Chicago. In 1997, the company launched WrigleyvilleSports.com, the ecommerce site, and not surprisingly, the management team learned some important lessons about multichannel selling along the way.

Wrigleyville Sports actually has three physical locations as well as a main warehouse and corporate offices. Before standardizing on a platform, each physical site had its own inventory database. The databases were synchronized 4 – 6 times per day, which sounds like a lot but it actually caused problems. Because the availability of inventory was only accurate 4 – 6 times a day, products were being oversold or they were not available at a particular location, which angered customers. Wrigleyville Sports’ solution was to increase the inventory at each location, which led to an entirely new set of problems: It tied up capital and resulted in overstocks.

According to Internet Marketing Manager Dave Weiss, Wrigleyville Sports had other multichannel issues that cost customers and sales. For example, if a customer bought an item via the web or at a store, it had to be returned through the same channel. If a storefront customer wanted to ship an order, the process was difficult. Worse, customer histories, service cases, and returns were unknown across channels, which led to customer service problems.

Like InkJetSuperstore.com, Wrigleyville Sports lacked in-house IT resources. There were often concerns about transaction capacity because the company faced volatile demand spikes during the Super Bowl, Stanley Cup, and Cubs’ playoffs. (The company sells licensed sports merchandise for Major League Baseball generally, as well as the NFL, NHL, NBA and NCAA.) Meanwhile, there were other business challenges having to do with accounting, billing, and reporting.

In 2007 the company standardized on NetSuite, which helped solved the database synchronization and multi-channel inventory problems.

“If the web store is out of stock, but the brick and mortars are not, we transfer inventory between locations to fulfill the order,” said Weiss. “And if there isn’t inventory available at any location we can remove it from the web in real time [which means we] don’t have to overstock the warehouse just to fulfill web orders.”

Customers are now able to return items ordered online at store locations and orders to be shipped can be placed from any location. In addition, the IT, accounting, and reporting issues have been resolved.

It’s About the Customer

Running a successful online business isn’t easy. It’s hard, especially as the needs of the business change. IT disconnects can interfere with customer satisfaction and sales because shoppers can tell the difference between a business that runs smoothly and one that does not. As merchants, we’re faced with management issues that affect our businesses. But at the end of the day, none of that matters to customers. Only the quality of the shopping experience matters.

Both InkJetSuperstore.com and Wrigleyville Sports reached a point where it was all too obvious that “business as usual” just wasn’t good enough. Automating formerly manual processes helped them save time and money while allowing them to provide customers with better quality service. And in the meantime they’ve been able to expand their relationships with customers through better customer relationship management and marketing practices.