Editor’s Note: For the past few weeks, Paul Chaney, our social media director, has addressed the integration of Facebook with ecommerce. He has reviewed a number of applications, including Wildfire and Fan Appz, both of which provide sweepstakes and coupons. He’s also reviewed fully-embedded Facebook ecommerce carts, such as Payvment and Milyoni. In this article, Chaney focuses on an ecommerce merchant, Layla Grayce, that makes use of a number of these free and low-cost apps to build out its social network presence. A furniture and accessories retailer, Layla Grayce provides a model for other smaller ecommerce merchants, and we discuss its approach, below.

At first blush, Layla Grayce’s Facebook fan page looks like many others. Its profile banner is a graphic image of the company logo, not the large 200×600 pixel skyscraper banners we have become used to seeing. 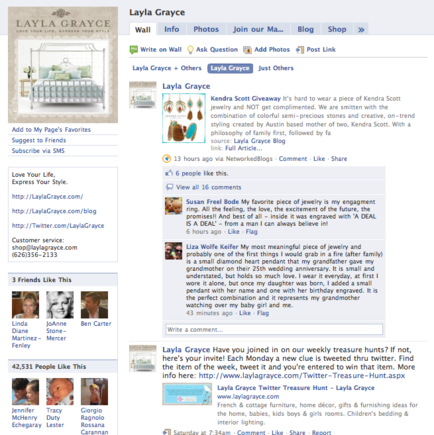 Scanning from left to right, you see common tabs: Wall, Info and Photos. It is at that point, however, that its Fan page takes on a distinct character, one fostered by the use of free and low-cost apps. Let’s take a look at each.

Layla Grayce’s Wall contains helpful content, much of which is pulled from its blog. Most often, the posts reference a particular product. It is not unusual for them to be peppered with comments from its 42,000 fans. Many of the posts receive “Likes,” too. The company makes it a practice to respond with comments of its own, thereby promoting a conversation between the brand and its customers.

While I’m not big fan of the Info tab, Layla Grayce makes use of it well. It references all the places where the company has a web presence and outlines the company’s overview, mission and products.

Note that when setting up a Fan page, you choose the proper business category from those listed, as the fields in the Info tab are different depending on the type chosen. Layla Grayce, for example, chose the Online Store category.

Layla Grayce has made extensive use of the Photos tab by creating roughly 40 albums based on different product categories, contests and promotions. In addition, the company allows fans to upload photos of their own.

The company puts particular emphasis on encouraging fans to become email subscribers, as that is a primary means by which it markets to customers. This particular tab page was developed using HTML and Facebook’s staticFBML, rather than a third-party application. 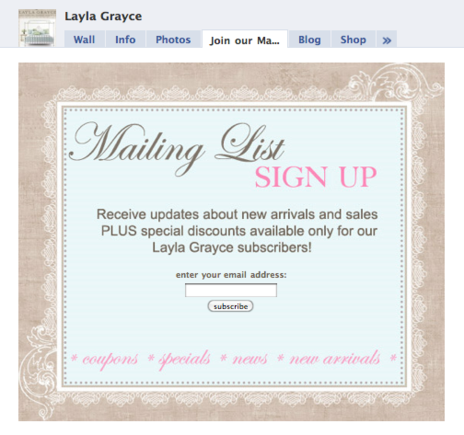 Layla Grayce uses the free NetworkedBlogs application to pull posts from its blog, The Backroom, via RSS. This serves two useful purposes. 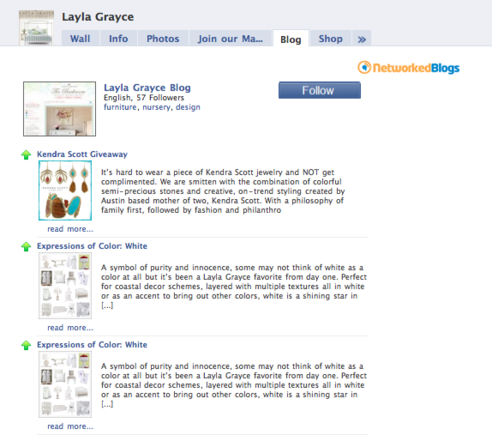 Layla Grayce uses the very affordable ShopTab ecommerce cart application to bring some of its products into the Fan page. Not all of the company’s 6,000 SKUs are included, only those in the “What’s New” category, which Layla Grayce updates weekly. 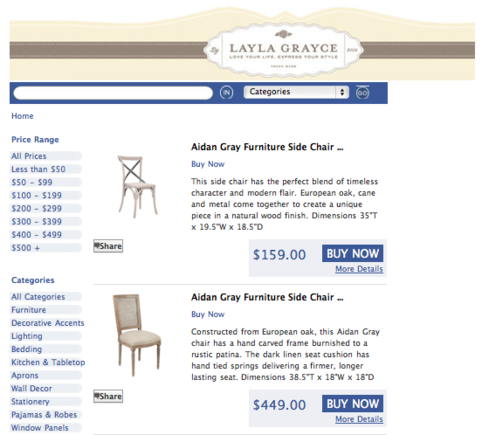 The company uses one other tab page, Notes, to periodically update information not included in the blog.

Instead of paying expensive programmers to create custom apps, Layla Grayce uses free and low-cost applications from a variety of vendors, something any ecommerce merchant can do. That practice is not restricted to Facebook, but extends to Twitter, as well. 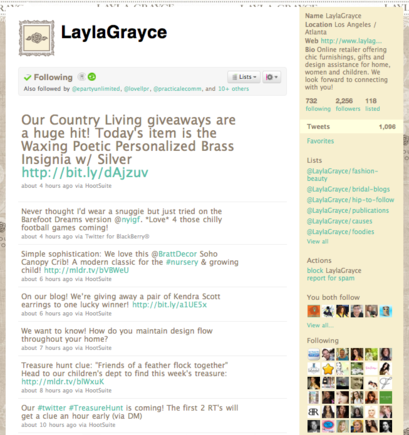 The first time I came across Layla Grayce’s website, I was impressed with its use of Twitter. At that time, a page on the website was dedicated to encouraging customers to follow the company’s Twitter feed and included a disclaimer to let followers know they would be receiving a direct message offering a discount coupon. The disclaimer explained that users could easily unfollow the feed if they chose to do so. It reminded me of the way opt-in email programs work.

Layla Grayce co-founder Wendy Rossiter Estes told me she used Offerpop’s New Follower application, which included the use of an automated direct message.

“We were reluctant to use this feature at first,” said Estes. “Irrelevant, unsolicited auto direct messages were associated with spam and we were advised to stay away from them. However, Offerpop suggested that offering something of relevance to users in the form of a discount coupon would be appreciated, so we decided to give it a try.”

Layla Grayce promoted the offer along with the disclaimer on the website and the Facebook Fan page, encouraging customers to become followers by enticing them with the message: “Follow us for a special discount.”

“We believe in being upfront with our customers,” stated Estes.

However, when checking the page in preparation to write this article, I noticed that it had been deleted from the site. Now, the only links to Twitter take users directly to the company’s Twitter page. Still, I think the prior approach was commendable in that it provided a level of transparency that builds trust and anticipation. Followers knew they would receive a direct message and that it would contain a discount coupon.

As to Layla Grayce’s use of Twitter, it is not merely a clone of the content on its Facebook page. Someone is apparently tasked with managing the Twitter account. So the posts take on a more personal flavor. It is not unusual to see an abundance of @reply messages and “retweets,” compared to relatively few broadcast or product-specific posts. It also appears the two channels, Facebook and Twitter, serve separate purposes.

Layla Grayce’s other social media outlet is its blog, known as The Backroom, which is used primarily for product promotion. While this may seem not in keeping with blogging best practices, according to Estes this approach is well received. “We know our customer and what they like to see,” she said. 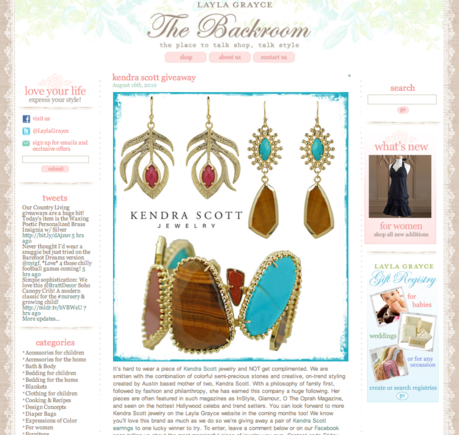 Layla Grayce does not segregate its social media outreach from the main ecommerce site, but incorporates it in a couple of ways. First, links to the Facebook Fan page, Twitter page, and blog are included into the template, so that they appear in the header and footer on every page.

Second, social sharing options, such as Twitter and Facebook via the “Like” button, are included on product description pages. The company’s email messages also include these options.

While Layla Grayce’s social media integration is not necessarily groundbreaking, it is its use of free and low-cost applications from a variety of vendors that makes its approach worthy of interest by other merchants. Layla Grayce understands that it has entered a new era, one where the ecommerce site is only a part of a larger ecosystem that is the social web. And it has made it a viable part of the company’s marketing strategy.