Twitter is the “Swiss Army knife” of social networking because it is a simple tool that can be used in many ways. Businesses are utilizing Twitter for such things as brand reputation monitoring, product promotion, customer service, and sales.

The key to maximizing Twitter’s value, however, has to do with creating a strategy around its use that, like Twitter, is simple, consisting of only four words: Listen, Follow, Engage and Measure.

Thanks largely to the advent of social networks like Facebook, LinkedIn and Twitter, people are communicating about your company, products and services. Businesses should take time to listen, and Twitter is well suited to that purpose. Input keywords either on Twitter’s home page or from the sidebar of your Twitter profile and you will see what people are saying about any topic in real-time.

A tool I use for listening is TweetBeep. After setting up your account, which only takes a moment, you input relevant keywords, which could include your company name, product names, industry terms or names of competitors. TweetBeep scans Twitter, looking for these terms, and anytime it finds them in use, sends a notification to your email inbox. The free version of TweetBeep is limited to five keywords and one daily alert. Premium versions start at $5.00 and offer more features. 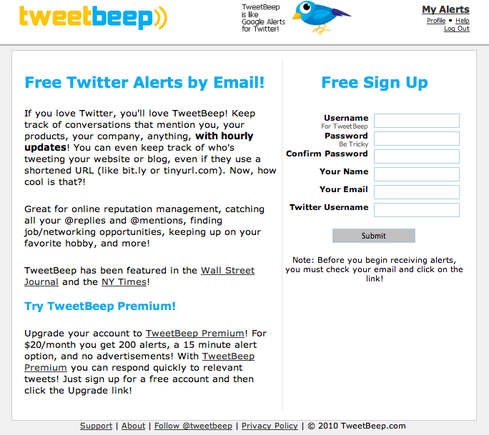 If you are new to Twitter, I suggest taking a little time just to listen and watch the Twitter stream, to get a feel for how the platform works.

Many people think the key to effective following is in getting as many followers as possible, and there are software programs that will enable you to follow hundreds a day. However, the real key to effectiveness can be described in one word, relevance. Follow only those that it makes sense for you to do so.

The issue for Practical Ecommerce has never been to generate large numbers of followers (though we are not opposed to that), but to build meaningful relationships with as many relevant followers as we can. The Twitter stream can become extremely noisy and laden with content. By keeping the focus on relevance, we can adjust the signal-to-noise ratio.

A favorite tool of mine to find relevant followers is Twellow, which bills itself as the “Twitter yellow pages. “There are hundreds of categories at Twellow, from accounting to yoga. You can also find followers based on geographic location. 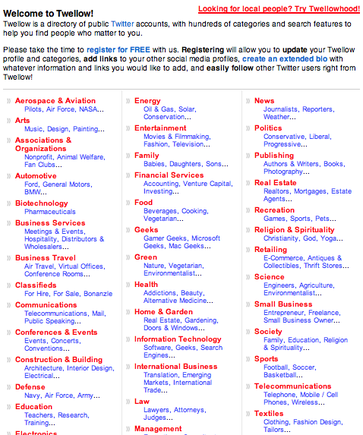 Another popular tool is Twitter Grader. It is part of the suite of “grader” applications by Hubspot, the web marketing company. Twitter Grader uses a specially designed algorithm to assign a score to each user: the higher the score, the greater the degree of influence. 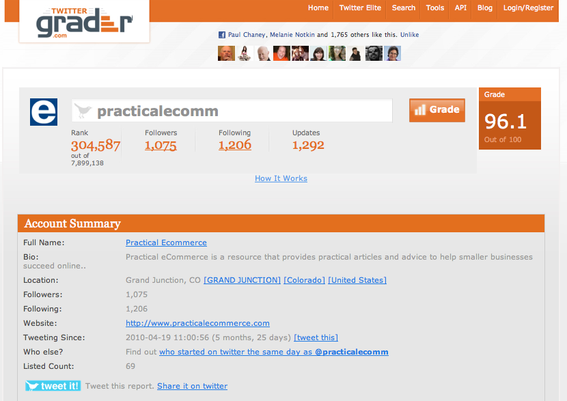 Twitter, itself, can help you find relevant followers. Login to your Twitter profile, click the “Find People” navigation link in the upper right-hand menu, and choose from the following options: Find on Twitter, Browse Interests, Suggestions for You, Find Friends, and Invite by Email. Also note that Twitter will include recommendations of people to follow in the right-hand column of your Twitter profile. I have found these usually to be on-target. 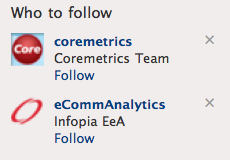 It’s one thing to listen and to follow, but, eventually, you have to engage followers in conversation. The question then becomes, “What do you say?” Here is a list of 10 dos and don’ts to consider:

The tweets most appreciated by users provide links to useful resources. Become such a source of information for your followers and they will likely elevate you to a place of influence.

It does little good to listen, follow and engage if you don’t also have a plan to measure the impact of that activity on your business. One tool we use with Practical Ecommerce’s Twitter engagement is dlvr.it.

Dlvr.it is designed primarily for content syndication. We use it post content created on the Practical Ecommerce website to our Twitter account and Facebook fan page. It also provides click-thru data that shows which links are being clicked and by whom, giving us both quantitative and qualitative information. In addition, we use Google Analytics to track traffic from social media, and Twitter consistently returns as one of the top five referring sites.

TweetReach is a tool that measures how far something traveled on Twitter. That could include a link, hashtag, keyword, or Twitter profile. It searches Twitter for all mentions of a search term and generates a report with detailed information about that term’s reach on Twitter. Here is an example of the reach of Practical Ecommerce’s Twitter profile, @practicalcomm. 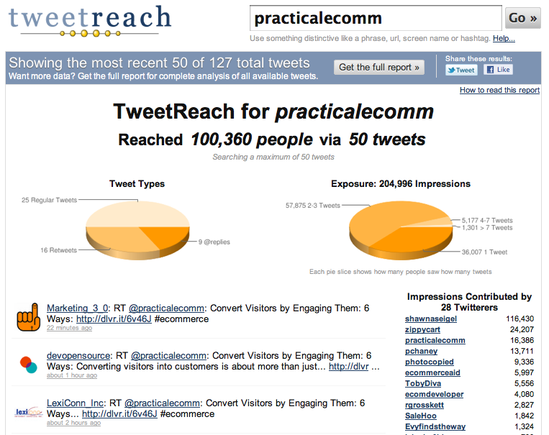 Twitter is gaining respect as a tool for business and marketing communications. If you are selective and purposeful in choosing whom to follow and concentrate your efforts on providing value to your growing network, you will become a resource others trust. And it all starts with a 4-step strategy: Listen, Follow, Engage, and Measure.

Next week, I’ll address some additional tools for cost-effectively managing the time invested in using Twitter.