As evidence, Mashable, the popular blog, has run an entire series of articles about IE6 that includes gems like “IE6 Must Die for the Web to Move On,” “Twitter Users Agree: IE6 Must Die,” “Google Agrees: IE6 Must Die,” and my favorite, “IE6 MUST DIE: 70+ Sites Unite to Kill IE6.”

Further evidence of how digital natives (Internet users that “live” online) feel about IE might come from the actions of the folks at Google and Facebook, the two most popular sites. Both sites stopped supporting some active versions of Internet Explorer this year because the browser exposed their servers to security risks and added significant development costs.

When you ask who is using the slow and poor performing IE6, IE7, and IE8 web browsers, some will tell you that they tend to be the least savvy surfers, who, frankly, don’t know any better. To help these poor folks get the picture, some developers have actually created plugins for popular content management systems like WordPress that do nothing except force IE browsers to crash.

As a final example, I wrote an article asking web developers to stop supporting IE6, which is still a really good idea. If I’d had my way, IE in general would have been pushed off of a cliff years ago.

But then I downloaded IE9. 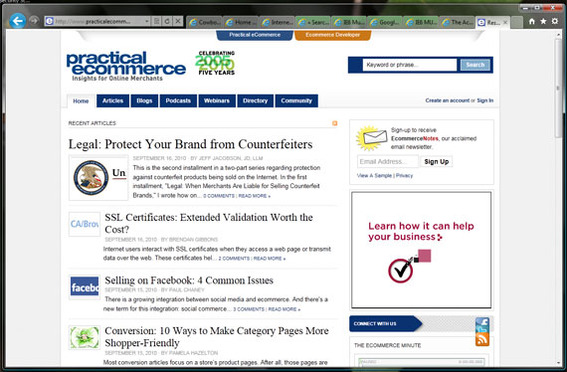 The Internet Explorer 9 beta is relatively fast, modern, feature-rich, and site-centric, which is why I am awarding this new IE four out of a possible five stars in this, “The PEC Review.”

“The PEC Review” is my weekly column aimed at introducing you to the products or services that I believe will help you improve your ecommerce business. This week, let me tell you why I think IE9 is a viable web browser for any ecommerce merchant.

IE9’s best feature is that it uses both the computer’s main processor (CPU) and its graphics processor (GPU) to manage text, graphics, and video, so that websites tend to perform like native Windows applications running on your desktop rather than just in your browser.

Microsoft is able to get your computer to do the heavy lifting thanks to two Windows application-programming interfaces (APIs) that let the browser access a Windows-based computer’s hardware. IE9 is not the first browser to use this technique or the Direct2D and DirectWrite APIs, but I still love it.

A major complaint about earlier versions of Internet Explorer is that they were not web standard compliant. This was problematic because it forced web designers and developers to code a site once for all web compliant browsers and then modify the code for IE.

From a merchant’s perspective, coding for IE was a major cost addition since it meant that your web developer or designer was using perhaps 10-to-15 percent more time to create or update your site than what would be required if IE was compliant.

IE9 addresses this problem by being the most web standards compliant browser Microsoft has ever made and generally being on par with other modern browsers. For example, my copy of IE9 scored a 95 on the Acid3 test. Acid3 is a Web Standards Project test that rates a browser’s compliance to most modern standards. 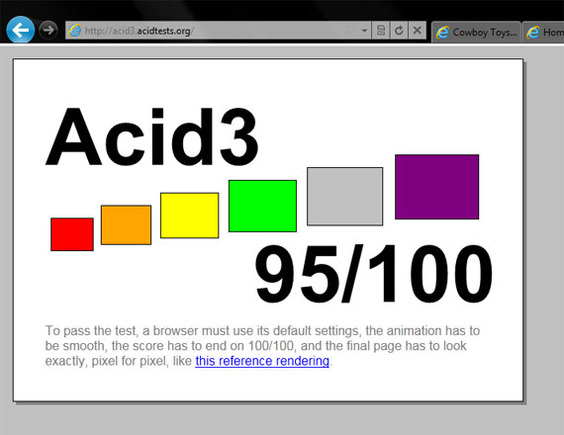 Turning my attention away from the technical side (and there were lots of improvements I didn’t mention), I want to tell you about IE9’s supercharged address bar. In fact, it is so improved that Microsoft has officially renamed the address bar, dubbing it “One Box.”

One Box allows an IE9 user to type URLs, search the web, see history, and see frequently visited sites from, well, one box positioned snuggly at the upper left of the browser. 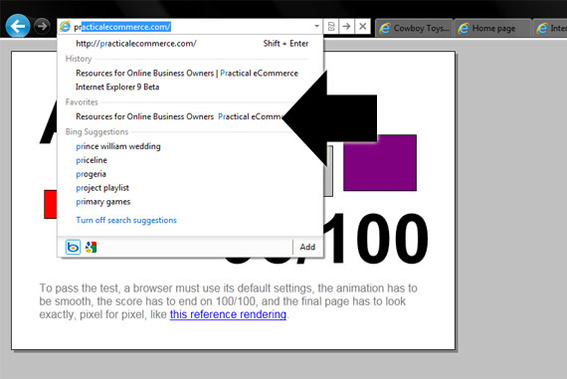 The idea behind One Box is not novel, but IE9 does an excellent job of executing it.

Almost Everything They Can Do, IE9 Can Do, Too

IE9 also incorporates Microsoft versions of all of the best browser features that every other browser maker has introduced in the past three years. There are too many to name them all, but as examples (a) each tab is a new instance of the browser to mitigate crashing, (b)tabs can be pulled to new windows, and (c) integrated download and add-on managers are mainstream. In this sense, IE9 is not necessarily doing anything we haven’t really seen before, but it is establishing itself among the most functional of web browsers.

IE9 also has a completely different appearance that takes the user’s attention away from the browser and focuses that attention on the site content. The website, not the web browser, is the star of the surfing experience.

Letting sites shine has been a big part of Microsoft’s IE9 announcement and it’s what the company means when it says that it is helping to make a “more beautiful web.”

IE9 is great browser and a vast improvement over earlier versions. And, in fact, there are loads of features and capabilities (like Chakra and HTML5 support and a privacy mode) that I just did not have the space or time to mention. But the browser isn’t perfect, I noticed a few examples of pages that it flatly messed up, and, in spite of lots of contrived demos from Microsoft, it offers competitive performance, and not superior performance, for the most part.

IE9 also cannot do too much about its predecessors, which are still inferior. My only hope is that Microsoft will push hard to get everyone to replace IE6, IE7, and IE8 with IE9.

In the past, if someone asked me about IE, I would have told him or her not to use it. But with what I’ve seen of IE9, I can now confidently recommend this browser to anyone, which is why I have awarded it four out of a possible five stars in this, “The PEC Review.”