Contest marketing is an excellent way to engage customers, build brand, and get leads for newsletters and other promotions. And in the age of social media marketing, an online contest can garner thousands of entries.

Specifically, Facebook says in the December 9, 2009 version of its promotion guidelines, which were the most recent at the time of writing, “you may not administer any promotion through Facebook, except that you may administer a promotion through the Facebook Platform with our prior written approval. Such written approval may be obtained only through an account representative at Facebook.”

I contacted Facebook, which is no easy task, and was told that only advertisers spending a minimum of $30,000 per month would be able to speak with a representative or get permission to administer a promotion on the Facebook platform. Effectively, this stipulation eliminates many ecommerce marketers.

Yet, there is hope if you want to run a contest marketing campaign and include Facebook. That hope comes in the form of Wildfire Interactive’s Wildfire Promotion Builder. This web application allows you to place contest or sweepstakes promotions on a Facebook fan page, your own site, or as a link in newsletters without violating Facebook’s restrictive promotion guidelines. This is why I am awarding Wildfire three and a half out of a possible five stars in this, “The PEC Review.”

“The PEC Review” is my weekly column aimed at introducing you to the products or services that I believe you will you improve your ecommerce business. This week, let’s get familiar with Wildfire.

Facebook is undeniably one of the most influential social media sites in the world. So if you’re running an online contest, you’ll want to use this platform.

Wildfire lets you place a contest or sweepstakes tab on your business’s Fan page. Wildfire can do this because, while Facebook prohibits you from directly administering contests on its site, it does allow applications that administer contests to plug into its site.

This is not, perhaps, as good as running the contest on your Fan page Wall. But it still gets your contest in front of your potential customers without the risk of getting banned from Facebook for violating the site terms. 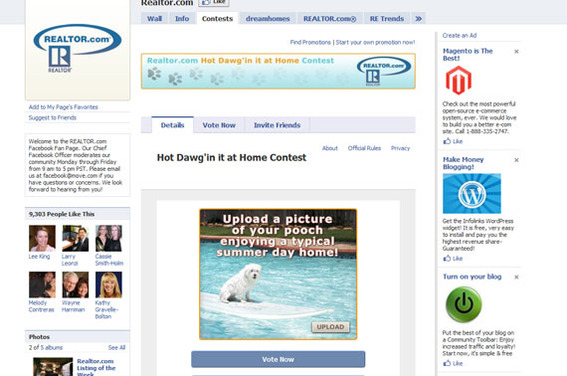 Details of a sample “Contest” tab on a Facebook Fan page, from a Realtor.

Wildfire makes it fairly easy to walk through the contest development process, helping you define the prize, timeline, and some other contest details. Depending on the level of service you purchase, you will have more or less control of your contest’s look and feel.

I was able to have a relatively nice contest up and running, including creating the banners and other graphics, in less than 30 minutes.

The Wildfire promotions are hosted on the applications servers and can be placed on your site via an iFrame or a simple JavaScript widget.

I wish I had a lot more control over how to integrate Wildfire, but as is, it is very easy, even for a non-technical marketer.

The Wildfire Promotion Builder has four pricing tiers. The application’s “Basic” service costs $5 per campaign, plus 99 cents per day for as long as the contest runs. But this barebones service doesn’t even allow for entry form customization.

The “Premium” service includes the ability to customize your contest’s design and get more campaign data. It costs $250 per campaign and $4.99 per day.

Finally, there is a “white label” service, where other companies can rebrand and sell Wildfire’s service under their own names.

The key to any promotion is results. My wildfire campaign is generating about 30 entries per day from a relatively new fan page and some modest email marketing.

I am a huge fan of contest marketing, and I think it makes sense to promote contests on platforms like Facebook. The Wildfire Promotion Builder is a great way to get your contest or promotion up and going, without having to spend $30,000 per month in advertising, which is why I have awarded Wildfire three and a half out of a possible five stars in this “The PEC Review.”