Amazon’s Mechanical Turk crowd-sourcing marketplace has been online since November 2005 and serves as a way of getting humans to perform common, repeatable tasks that computers have not yet mastered.

For ecommerce, the Mechanical Turk service can help produce product descriptions, sort images, or help to identify which keywords will work best in a pay-per-click campaign.

What Is a Mechanical Turk?

The name Mechanical Turk is a nod to an eighteenth century chess playing machine, which Wolfgang von Kempelen built to apparently impress royalty and earn money. The Turk was supposed to be a machine that played chess against human opponents — actually beating Benjamin Franklin and Napoleon Bonaparte. Eventually, it was revealed that the Turk was not actually a chess-playing machine at all, but rather it was an elaborate puppet of sorts, which was operated by various human chess masters hidden inside of a cabinet.

Using the Turk to Improve Your Business 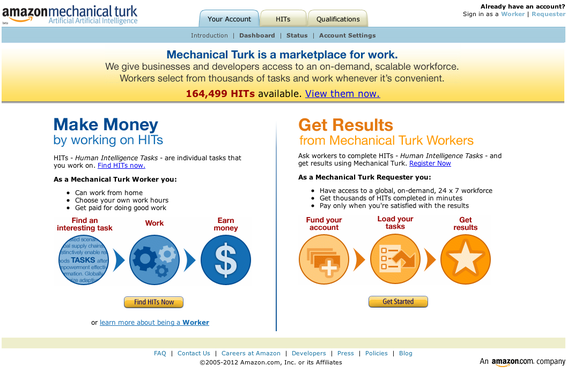 In the contest of an ecommerce business, the Mechanical Turk, and its army of human works from around the world, can be employed to tackle any number of tasks.

Consider the challenge of writing product descriptions. Product descriptions can often fuel site traffic and are very important for search engine optimization. But, at the same time, they can be very time consuming.

Another possible use of the Turk for online retailers is to identify potential keywords for PPC campaigns. In this case the hit could include a picture of a product and the worker could specify how he or she would search for the item on Google or Bing. The list of resulting keywords could then be tested in actual PPC campaigns.

The Mechanics of Using the Turk

There are really three steps to using Amazon’s Mechanical Turk: creating a template, providing data, and approving the completed hits. Amazon also requires that requesters create a Mechanical Turk account and fund that account before hits may be submitted.

With an account created and funded, the marketer will be asked to create a template. Amazon offers several basic templates to work from. The key with these templates is to provide careful instructions about the task, provide a means of submitting a response to the hit, and place variables in the template that will allow many hits to be generated from a single template.

Variables in the hit template are made by using a dollar sign followed by curly braces with the name of the variable inside, as in: ${variable_name}.

This variable may be submitted anywhere in the hit template. For example, “write a product description for ${productname} from ${manufacturer} with UPC code ${upccode}.”

Once completed, the spreadsheet should be saved as a comma separated version file and submitted. Workers will quickly begin completing the tasks and very soon it will be time to begin approving batches.

How Much Should You Pay for Hits?

The Mechanical Turk, like other crowd sourcing marketplaces, is not a source of slave labor. If marketers want more or better results, they should expect to be the equivalent of about $6 to $10 per hour.

For example, if a task will take about 1 minute to complete, it should be priced at ten cents to about 18 cents, which computes to roughly $6 and $10 per hour, respectively. For something that will take about ten minutes, expect to pay between $1 and $2.

Amazon’s Mechanical Turk is a crowd-sourcing marketplace wherein ecommerce businesses can have “hits”— i.e. tasks — completed quickly and inexpensively. The Turk is certainly not good for every task, but well planned hits can produce good results.