Here’s how to get started using Twitter Promoted Accounts and Tweets. 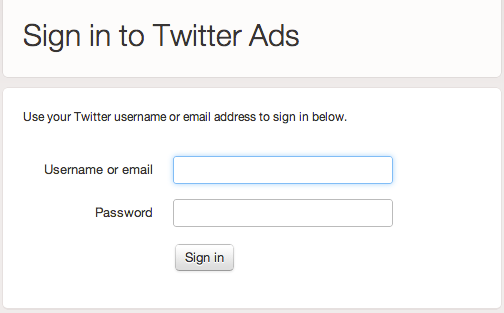 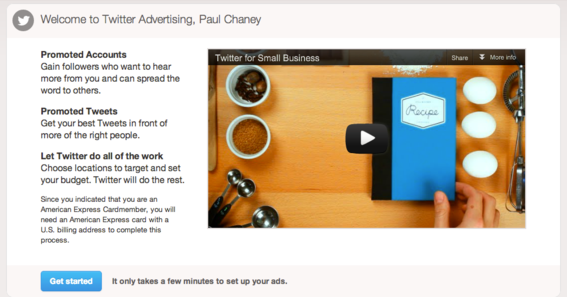 Select your budget for Promoted Tweets. 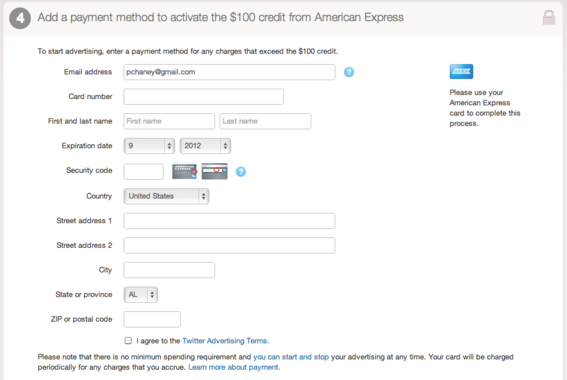 The form indicates that merchants are to enter a “payment method” for charges that exceed the credited amount. Even though Twitter’s help center states that Twitter accepts Visa and MasterCard, when I attempted to use Visa, a message appeared stating that an American Express card was required. Most likely, this is due to Twitter’s partnership with American Express, which I explained in “Ecommerce Comes to Twitter,” my previous article on that topic.

Once credit card information has been added, click the blue button to start the ad campaign.

Twitter recently added a tracking function for Promoted Accounts in the form of a chart that gives account owners an at-a-glance view of their Twitter audience growth. Both paid and unpaid followers are included.

Track follower growth with this chart.

In response to advertiser requests for more control over which Tweets are promoted, Twitter now offers a manual selection option in addition to automatic selection of the most engaging Tweets. Using the manual option, merchants can select a few Tweets for promotion or Tweet from within the interface.

There are three primary benefits to using Twitter Promoted products: