Use Shopping Surveys to Increase Conversions

If you ever want to know what online shoppers are thinking, ask them. Shopping surveys tell you what’s working and what isn’t. They can also tell you things you never thought about. No matter what you sell, if you’re not asking for real feedback, you’re missing one of the best ways to determine why people leave the store without buying. 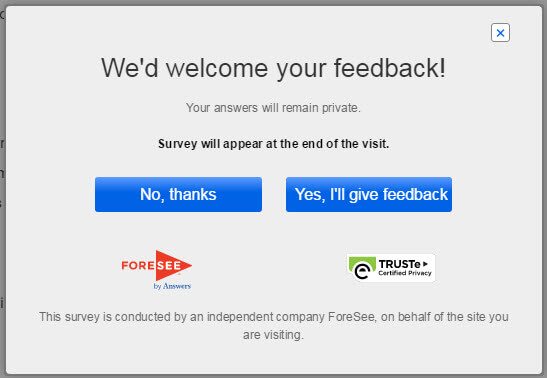 Foresee is a popular feedback service used by big etailers.

While in-session pop-up or popover requests are the norm, most visitors close them because they interrupt the task at hand. They do, however, provide some of the greatest detail when it comes to site usability, primarily because they’re completed while the site is fresh in one’s mind. Exit surveys are actually more intrusive — it’s like stopping someone on his way out of Target, asking, “Why are you leaving?”

Whichever methods you choose (and you should be toggling feedback requests for usability and reasons for buying), be sure to ask what’s important, and ditch what isn’t.

Focus on what matters.

And ditch what doesn’t matter. 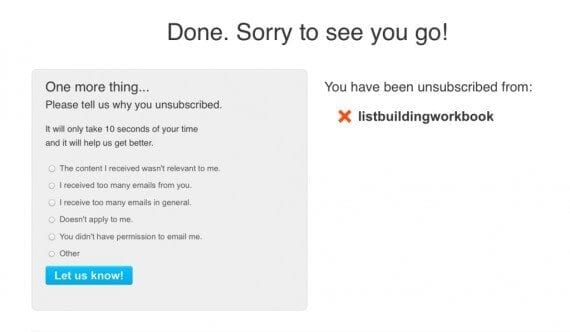 The typical unsubscribe survey includes options like, “I receive too many emails from you.” This indicates that you are already aware you send too much. Same goes for permission. Source: Get Response.

There are many online services and tools that can be used to collect information. Survey tools often provide reports so you can see overall ratings, but online forms can also be used if you don’t expect a great deal of responses or want to manually review each one.

Then there’s the simplest of all tools. GrooveHQ.com – which offers help desk software – found the response rate on surveys sent to customers who canceled to be quite low – just 1.3 percent. GrooveHQ ditched it and focused on one specific question, which it sent via email. 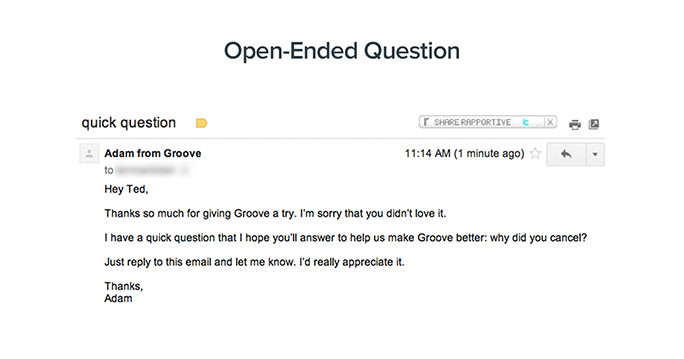 Asking one, simple question can garner the highest number of responses, as well as more detailed replies. Source: GrooveHQ.com.

The response rate on the email was more than 10 percent, and it provided Groove with valuable information, including bugs and hang-ups the company didn’t know existed. Testing the psychological response to “why” vs. “what”, they found that asking “What made you cancel?” instead of “Why did you cancel” boosted the response rate to 19 percent.

Whether you use a full-blown service or a manually operated tool (like email), be sure to follow these pointers.