New product introductions require a blend of creativity and number crunching. Do it well and your online business will generate sales and profits; do it poorly and you could be wasting money on underperforming ads.

Consider, as an example, the differences between marketing a product like GoRuck’s unique, military-grade rucksacks and marketing shoes from Nike. GoRuck needs to introduce shoppers to the benefits of its specific products, help them understand the company, and create a perception of value. An online store selling Nike shoes, however, may need to let folks know that it has Nikes at reasonable prices. How one achieves either of these ends could be different.

In Search of the Proper, Product Launch Marketing Mix

To help spread the word about its products, GoRuck created a series of events that put paying participants through military-style training whilst wearing the company’s rucksacks, some of which cost nearly $400.

Ultimately, GoRuck’s events — the company has had more than 2,500 — appear to be a successful enterprise of their own, akin to CrossFit events and the Spartan Race series. But an ecommerce entrepreneur would be unlikely to find “create massive fitness event series” on a list of product launch recommendations.

In June, Shopify, the ecommerce and point-of-sale provider, released a short case study about its own private label ecommerce experiment. Starting with nothing, a group of marketers at Shopify created a new online brand, Hello Matcha, and generated $922.16 in revenue in just three days.

For its product launch, Shopify made extensive use of personal networks to help spread the word about the product online.

“Using a combination of Skype, emails, Facebook, Twitter, and Google Chat, Tommy (Walker, one of Shopify’s marketers) reached out to everyone in his personal and professional network that he thought would be interested in trying our matcha tea,” wrote Shopify’s Richard Lazazzera. “Marketing is all about finding the right channels for your particular business and getting in front of as many qualified buyers as possible.”

The challenge, then, for ecommerce entrepreneurs and marketers is to learn which marketing channels will help them address potential customers in a meaningful way.

An approach to discovering these sorts of channels may be to do a little research; just be careful about what you find.

Once you have goals for your new product launch, do a bit of marketing research to find out what others have learned from launching products or surveying shoppers. But always put that research into context, comparing it to the market, to what you know about your industry, and to what your business can afford and execute.

For example, The Nielsen Global New Product Innovation survey asked more than 30,000 shoppers in North America, Latin America, Europe, Asia, the Middle East, and Africa how they learned about new products. The research focused specifically on shoppers with Internet access, and it provided some interesting insights into how shoppers encounter new products. 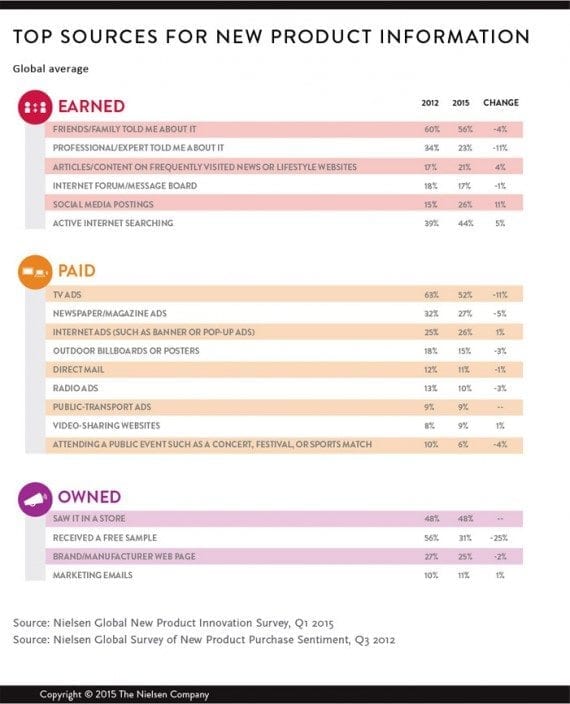 This 2015 Nielsen survey provides many insights about how shoppers discover new products.

One of the most interesting findings in the survey was that television ads, as a herald of new product introductions, had slipped some 11 percent in just three years.

This sort of data might be applied to your product launch strategy, helping you make better decisions about where to invest. Just be careful to interpret the research correctly.

How, as an example, should you view television advertising in light of this information from Nielsen?

One might think that since television advertising is on the decline, it should be avoided. But, according to the Nielsen survey, television advertising was still the second most common way that shoppers learned about new products, with only word-of-mouth from friends and family members (56 percent) being cited more often.

“Generation Z and Millennial respondents use TV and radio to learn about new products at similar rates to Generation X and Baby Boomer respondents,” the Nielsen study authors wrote.

So maybe television really is a good channel for new products. And, perhaps, you should consider it. Hold on, there is one more thing to consider.

In general, marketers spend more money on television. TechCrunch reported in January 2015, that in the United States, television gets 42 percent of ad spending or about $78.8 billion this year.

Given that so much more, in general, is spent on television, wouldn’t it be normal to expect television ads to be near the top of Nielsen’s list?

The point to all of this is that doing what Shopify’s Lazazzera suggests — “finding the right channels for your particular business and getting in front of as many qualified buyers as possible” — is not as simple as looking for marketing data, best practices, or even good research about how shoppers find new products.

It is all of those things — combined with a healthy measure of creativity and experience.