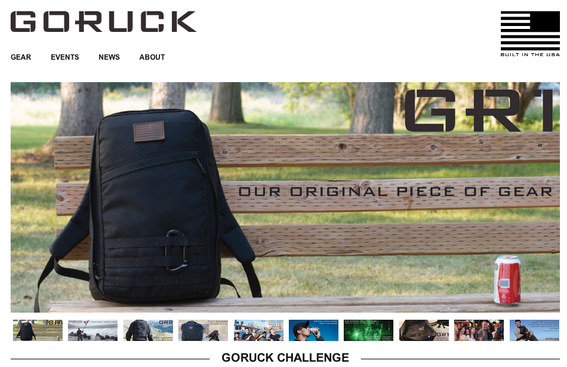 Goruck is an American manufacturer and retailer of high-quality rucksacks, bags, and gear that does an exemplary job of marketing its products. In fact, there are at least three lessons that any online retailer can learn from Goruck’s content and promotions.

Goruck’s name is a play on words, combining “go” and “ruck,” which is a term often used in the military to describe walking or marching with a backpack or rucksack. Since its start in 2008, the company has been marketing — marching? — in the proper direction, growing sales and building a following.

Although there are many facets to Goruck’s marketing, three areas stand out: the company’s human (and canine) face; its point of view; and the way it has built a community of fans.

Goruck Has a Human Face

Jason McCarthy, Goruck’s founder, is a former special forces soldier, the leader of the company’s Goruck Challenge extreme events, and its public face. The Goruck “About” page features McCarthy’s photo and a letter to visitors simply signed Jason. 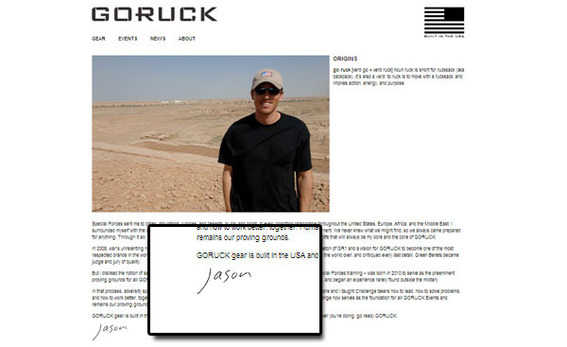 Having a human face, if you will, helps shoppers connect with Goruck.

McCarthy writes the company’s blog and is its primary spokesperson. Only McCarty’s Labrador Retriever, Java, who frequently appears in the blog and on Goruck product pages, comes close to rivaling McCarthy in public exposure.

In terms of marketing, this approach means that when potential customers are introduced to Goruck, they are not only seeing a business or brand, but also they are meeting Jason McCarty.

Having a strong, likable human face for a business can be a key to engaging new customers. This is not necessarily a new tactic — plenty of businesses have recognizable and likable spokespeople — but online it can make the difference.

Goruck Has a Point of View

McCarthy’s Goruck has a strong point of view.

When companies choose to make a strong statement about beliefs or point of view, those companies can have a magnetic appeal to prospective customers who already share similar opinions. Goruck clearly states in words and deeds that it believes in quality products made in the U.S. and in traditional Americanism.

“Special Forces sent me to cities, mountains, jungles, and deserts, by day and night, in every condition imaginable throughout the United States, Europe, Africa, and the Middle East,” wrote McCarty on the Goruck website. “I surrounded myself with the best, a standard I grew to expect, and I trusted my teammates, my instincts, and my equipment. We never knew what we might find, so we always came prepared for anything. Through it all, we worked hard and played hard, sometimes in that order, and I learned an honest way of life that will always be my core and the core of GORUCK. …GORUCK gear is built in the USA and proven in the harshest conditions in the world. Wherever you’re going, whatever you’re doing, go ready GORUCK.”

McCarty devotes a significant number of his blog posts not to Goruck products, but rather to other businesses that manufacture items in the U.S. or that share Goruck’s views. Recent posts mentioned Ozone Burger Barn on Highway 21 in Arkansas, Carter’s Cobbler Shoppe in Bozeman, Montana, and Bold City Brewery in Jacksonville, Florida. 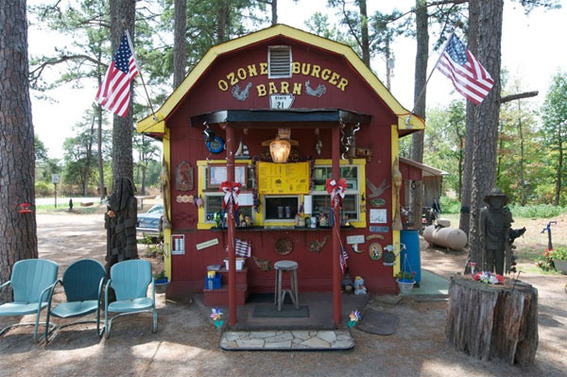 Goruck makes it clear that it has a certain way of seeing the world, customers that have similar views of instantly drawn to the company. Blog posts about other businesses — such as Ozone Burger Barn — are key to that point of view.

Stating a clear point of view can in some sense be “dangerous” in marketing since strong opinions can and will offend some shoppers. But the benefits of connecting with shoppers that share a business’s worldview may make it worth the risk.

Goruck Has Built a Community

Thanks in part to its human face and well-defined point of view, Goruck has also been able to develop a strong community that shares the Goruck story and touts the benefits of Goruck products.

This community may be seen in social media where the small company has more than 17,000 Facebook fans and more than 3,200 Twitter followers, but it may also be seen in those who take part in the Goruck Challenges.

Goruck Challenges are a combination of military-style team build, leadership training, and extreme fitness competitions that bring together a group of strangers and transforms them into a team. McCarty admits that he started the challenges to promote Goruck and field test gear, but the challenges have grown into much more powerful events.

Not every online retailer is going to want to host events like the Goruck Challenges. But emulating the focus on people and community will certainly help marketers in the Internet age.