In the past, if you wanted to make a video for your business, you had to hire a production company or ad agency, spend tens of thousands of dollars and, as often as not, end up with a product much different than you expected. Edits and retakes were costly, so you just left well enough alone.

That is no longer the case. Now, with a small, inexpensive camcorder or even a smartphone and low-cost, even free, video editing software, you can create your own videos at a fraction of the cost. In fact, you can purchase easy to use, hand-held HD-quality camcorders for a few hundred dollars.

Here are two examples of small businesses that took advantage of this small camera revolution to build brand awareness, generate more traffic to their respective websites and, in the case of one company, dramatically increase sales.

Blendtec’s ‘Will It Blend’ Success Story 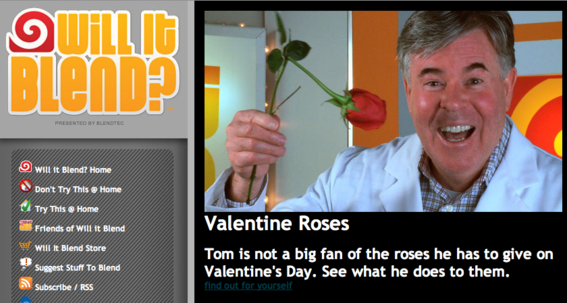 Blendtec’s Will It Blend Video Site

One of the most prominent examples to support this approach is the “Will It Blend” series of videos created by Blendtec, a previously little-known company that makes high-quality, commercial grade blenders.

Soon after starting to work with the company, George Wright, marketing director, was on the factory floor and came across Blendtec CEO Tom Dickson blending — no joke — a 2″x4″ piece of lumber. This caught Wright’s attention, though later he learned that such extreme blending was a routine way of quality testing.

Wright knew a good marketing idea when he saw one. He bought a few items — a rake, bag of marbles, six-pack of Coke, a rotisserie chicken, and a lab coat — spending a total of about $50. He dressed Dickson up in the lab coat to make him look like an engineer, grabbed a camcorder and made the first video, grinding the bag of marbles into powder. He released the video on YouTube and the rest is history.

Since that time, Wright and Dickson have recorded dozens of videos grinding up everything from a rake to an iPad. This low-cost, do-it-yourself approach to video making has paid off dramatically for Blendtec. Here are the numbers.

Blendtec has also experienced the kind of media attention that would make a Fortune 500 company jealous, including national coverage on The Today Show, iVillage Live, History channel, Discovery Channel, The Big Idea, Food Network, and The Tonight Show.

Blendtec was reportedly mentioned in Congress when a member threatened to take a bill and put it in a Blendtec blender.

Hiring an expensive video production company was what Bizzuka, an online marketing company, did. This occurred when I was marketing director there. We spent roughly $20,000 to have a video professionally created to showcase our company’s content management system. While the end result was satisfactory, it took months to complete the project and significantly exceeded our budget in the process.

When the recession hit in 2008, we created a “video whitepaper” to explain ways small businesses could save money in marketing and advertising. This time we didn’t hire a professional videographer. Instead, we purchased a $600 HD camcorder, $100 wireless microphone and $50 tripod. We then set out to make our own videos.

We interviewed thought-leaders in the web development, marketing, public relations and social media industries, then quickly edited the series using iMovie software on our CEO’s MacBook. Within a few weeks we released a nine-part series on how small businesses can effectively market themselves in the recession.

Our design team created a microsite to house the videos and we uploaded the series to YouTube and on our company Facebook page. We used free social media channels like Facebook and Twitter to create buzz about the series. The only money spent on marketing was a $200 press release syndicated via PRWeb.

The result? Bizzuka experienced more traffic to its website in two weeks than would normally have seen in two months. The videos were viewed hundreds of times, creating exposure for the company we would never have been able to afford otherwise. Dell even picked up the series for use on its small business blog, opening the company up to the exact audience — small business owners — that we wanted to reach. For less than $1,000, we were able to generate more news and interest in our company than the $20,000 professionally created video ever could.

I am not suggesting that professional videos are no longer needed. It’s just that there are less expensive ways to go about it. Companies like Blendtec and Bizzuka are models for small businesses to follow. Both prove that an inexpensive camcorder combined with a little imagination can yield big benefits.