The amount of time people spend on their smartphones is amazing. Americans reportedly spend 4.7 hours each day on their smartphones and they check social media accounts 17 times daily. That’s a lot of opportunity for ecommerce marketers to target mobile consumers. Pinterest can help reach them.

Pinterest is growing at an astounding rate. In September 2015, Pinterest announced that it had 100 million active monthly users. Those are not registered users — a common tactic to impress investors even though many accounts haven’t been used since the day they were created. They are 100 million people using Pinterest each month. It’s not as big as Twitter, Instagram, or Facebook. But 100 million is nothing to sneeze at.

Pinterest also revealed in September that the number of pinners had doubled in the previous 18 months and that 45 percent of users are outside of the U.S. Perhaps most impressive is the activity of those 100 million users. Consider these statistics:

Many boards also focus on crafting and do-it-yourself projects.

I can relate to the effect of Pinterest. My wife uses it religiously. She created a private board to pin wedding ideas before I’d even popped the question. Many of our new meal ideas now come from a Pinterest pin, complete with picture and a full recipe. We have a couple cookbooks, but Pinterest acts as our digital cookbook that is constantly updated and shared.

There is impressive commercial potential on Pinterest — from clothing to food items to crafting materials. But to tap this potential, there should be a clear connection between products that users have pinned and a method for others to buy those products. Buyable Pins does that, but with a couple conditions.

An advantage of Buyable Pins is that a blue “Buy” button, as well as the price of the item, appears with the pin in the upper right corner. The blue color contrasts with the general red tones of Pinterest to generate attention. The transaction is completed inside the app for a seamless transaction.

The second condition is that Pinterest is currently integrated with only five ecommerce platforms:

Buyable Pins are tied to a product feed, which keeps the information up-to-date. The transaction flows seamlessly in the app. If your business is on one of these platforms, consider Buyable Pins.

Another option for merchants is Promoted Pins, which is a method to advertise your products and link to your website. Promoted Pins fits in with regular pins, as in the “BarkBox” example, below.

Promoted Pins mimics regular pins, as in this “BarkBox” example, in the red box.

A Promoted Pin behaves like a regular pin. There are two type of campaigns that you can run with Promoted Pins.

The targeting on Pinterest is simple. There are five choices.

Targeting on Pinterest is not complicated, which means you should be able to get started quickly.

There is one important tip for tracking on Pinterest. For Promoted Pins, there is no way to tag the URL unless the original pinned URL had tracking parameters. But even that is not helpful because then your paid Pinterest traffic and organic Pinterest traffic can get mixed up. To fix this, after you’ve promoted a pin, edit it so that you have the option to add tracking to the destination URL, as shown in the following screenshot. 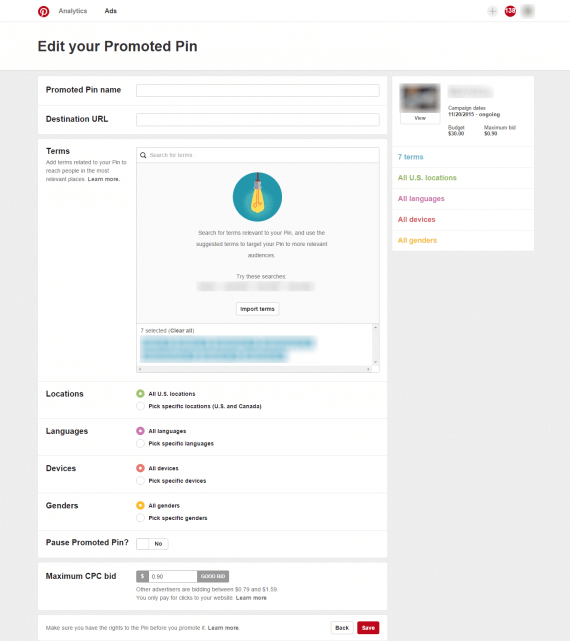 After an advertiser launches a Promoted Pin, he can then edit the URL to add tracking parameters.

I work with an ecommerce client that has experienced success with Pinterest. The client sells beard care products. So you don’t have to be in the food, fashion, or do-it-yourself space to succeed with the platform.

Pinterest announced in late 2015 that Promoted Pins would be open to all U.S. advertisers in January 2016. Pinterest then missed this deadline. But interested U.S. advertisers can sign up for the waitlist, to be notified when the platform is available.