Periscope and Meerkat are apps that stream video content live and promote the streams through Twitter. These apps take real-time communication into the era of unlimited mobile data packages.

Previously, Twitter and Instagram focused on sharing text and images in real time, and only recently have short snippets of video been incorporated into that package through the likes of Vine and Instagram video. However, now that users are less worried about data limits, it’s possible to share live video footage in real time, too.

If you’ve seen “Live Now” tweets appearing in your timeline in recent weeks, they are likely from users of Periscope and Meerkat. Both tools are suited to broadcast news content, celebrity content, and behind-the-scenes style insights. Even if you don’t broadcast your own content, you’re likely to be watching videos from these apps in the coming months. 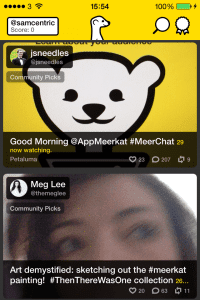 Meerkat is the first video-streaming app, debuting at South by Southwest in Texas in March 2015.

Meerkat is the first video-streaming app of its kind. It debuted at the 2015 South by Southwest Interactive week in Texas. Meerkat automatically tweeted a link to every single broadcast, filling Twitter feeds with “Live Now” tweets as attendees experimented with broadcasting from the event. Twitter integration thus played a key role in the app’s early success, with follow suggestions generated through Twitter’s social graph.

An added bonus of the real time experience is the ability to give instant feedback through likes and comments on live video streams. This can result in viewers guiding the direction of the content as it’s being created, or simply being able to interact with the broadcaster. Broadcasters can also measure the success of their content through the number of likes their stream attracts.

With Meerkat, everything is live. “There are no reruns” is Meerkat’s claim. This builds excitement, but can also make the app frustrating for users. A common complaint is that a Meerkat user will tweet a live stream, but by the time a Twitter user clicks through to view, the stream is finished, leaving the viewer with a broken link.

We now know that Twitter had video streaming plans of its own: Periscope. Twitter pulled Meerkat’s access to key Twitter information. As a result, it is now much more difficult to find your Twitter circle on Meerkat and follow suggestions have now become more generic, linked to celebrity and broadcaster accounts. 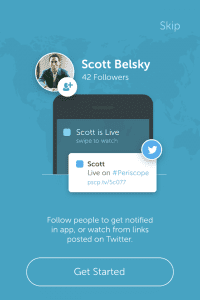 Twitter acquired Periscope in January for, reportedly, $100 million. Periscope launched just weeks after Meerkat. Periscope builds on many of the features that Meerkat pioneered.

One of the key differences between Meerkat and Periscope is that tweeting links to streams from Periscope is optional; it doesn’t happen automatically. This enables Periscope users to control who sees their tweets, rather than broadcast publicly.

Another feature that sets Periscope apart is that it saves video content for 24 hours after the stream ends. This prevents the broken experience that many Meerkat users encounter.

Periscope has same interaction capabilities as Meerkat — although in Periscope’s case you send hearts instead of a like to show your appreciation for content. Periscope also has access to Twitter data to help you find people you follow on Twitter through Periscope, giving a more personalized experience for new Periscope users to get started.

Meerkat vs. Periscope: Which One to Use?

Brands are already starting to experiment with live video streaming. Periscope is attracting some big players, such as Spotify, Pepsi’s Mountain Dew brand, and DKNY, the fashion brand. Meerkat’s brands are just as prominent, including MasterCard and Starbucks.

When it comes to the number of users, Periscope overtook Meerkat quickly. This was partly due to Twitter blocking access to its data and partly due to the ability to replay video over a 24-hour period. It’s this replay option that is most appealing to marketers, who are keen to maximize the return on time invested. 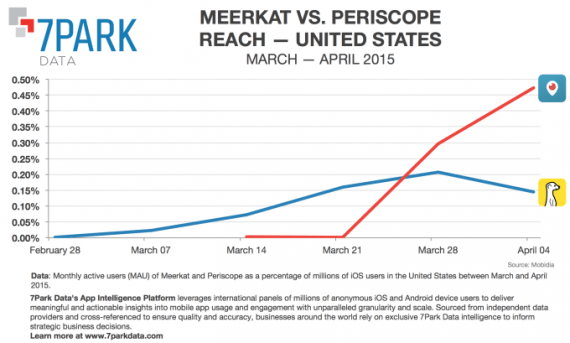 Periscope quickly gained more users than Meerkat. This graph from 7Park Data shows the percentage of iOS users in the U.S. that use each app.

But the number of users for both apps is still low. Meerkat reaches just 0.1 percent of iPhone and iPad users, whilst Periscope reaches 0.5 percent. In comparison, Twitter is used by 19 percent of all iOS users. Neither of these live-streaming apps is among the 100 most popular. Periscope is number 4 in free social networking apps, and Meerkat is number 95, according to TopAppCharts.com.

The opportunity may be small now. But the use of live video is growing. Marketers are starting to think about ways they can incorporate live video streams into their content mix. Big brands will certainly experiment, with celebrity coverage, such as exclusive footage of catwalk shows.

But small brands can benefit, too. Examples include Q&A sessions with experts, behind-the-scenes footage of products being made, and streams of products in action. Live streaming can engage your audience without breaking your budget. The only limit is your creativity.