Narrowing down the problem spots in an online store is not a simple task. While analytics shows us which pages and content performs better than others, we often miss the differences between desktop and mobile shoppers. Many reports also group tablets and smartphones together, even though the varying screen sizes and resolution typically mean websites display differently between the two. Users who visit a website on a smartphone and then a tablet also tend to interact with pages in different ways.

When studying Google Analytics (or similar), make sure you are segmenting your visitors. Focusing on grouped averages will not likely provide the reports you need. Typically you should segment visitors via device, traffic source, and the outcome of the visit.

While you want to analyze many metrics, the key data for converting landing pages are bounce rates and actual conversions — i.e., checkout completions, in most cases. But not all landing pages are designed to convert visitors, so the bounce rate may not matter much on those types of pages. In the examples here we’re referring to pages designed to promote product purchasing.

In the screenshot below, which was taken from a site catering primarily to women aged 45 to 54, nearly 17 percent of the overall sales from the landing page came from mobile devices. Not bad, considering overall mobile device access accounted for just under 36 percent of landing page entries. 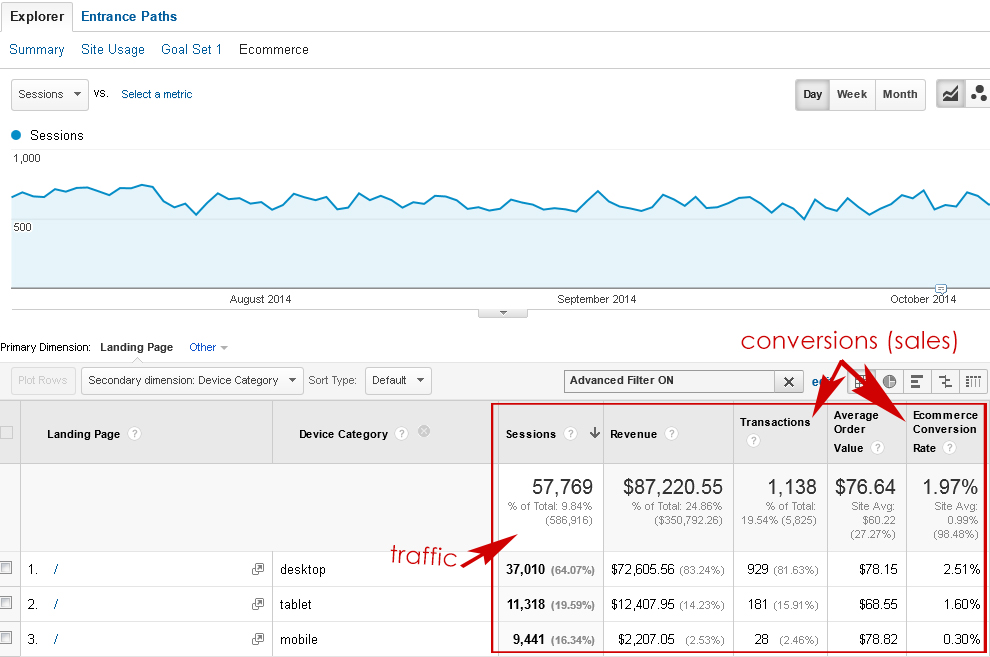 In this September 2014 report from Google Analytics, 64 percent of the traffic came from desktop users. Nearly 20 percent of came from tablets, and 16.3 percent came from smartphones. The conversion rate on mobile, though, was much lower. 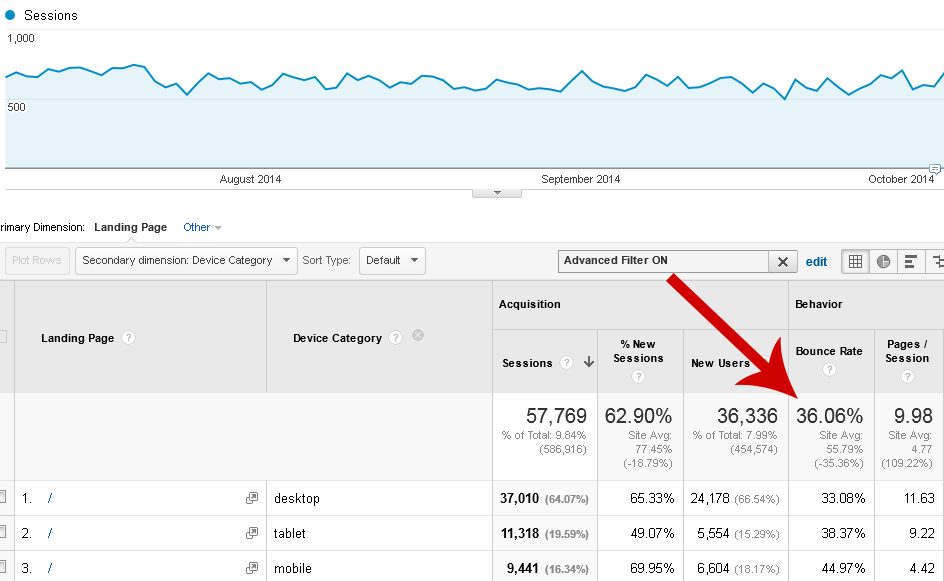 The target audience will play a big role on the overall numbers. These rates will also vary from page to page, so it’s important to look at several landing pages, as well as a selection of category and product pages.

In the next example, which comes from a site selling music and band memorabilia, the primary demographic is men aged 35 to 44. A higher percent of them (22 percent) access the site via smartphone, but a lower percentage (12.19 percent) use a tablet. Note, though, that the bounce rate is lower for mobile devices than for desktops — the opposite of the first examples shown. 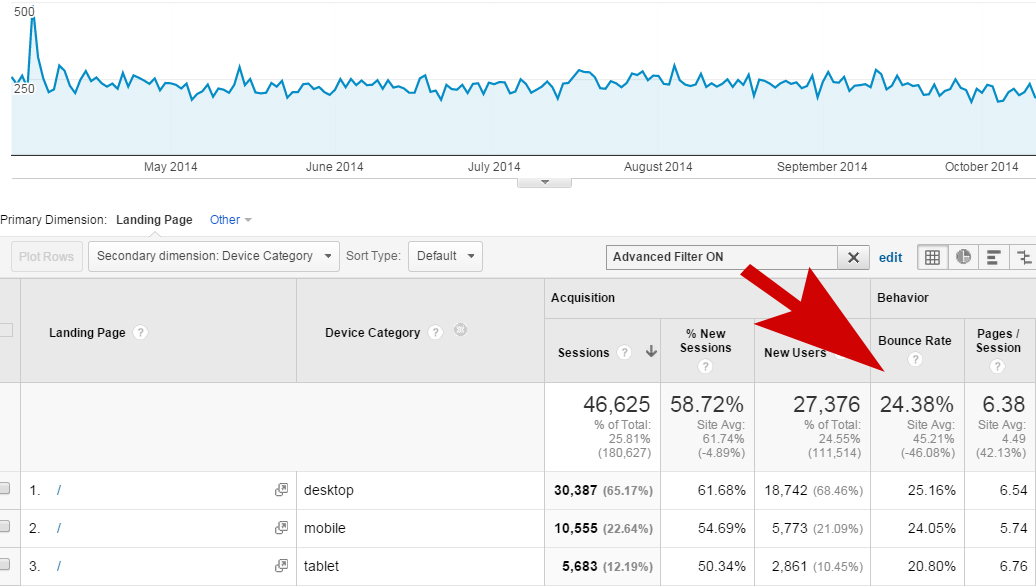 This entertainment-selling website shows a lower bounce rate for smartphone and tablet users.

Overall averages, in other words, shouldn’t be the driving force behind any real analysis, especially when it comes to bounce rates and sales. In nearly any definitive study showing U.S.-based statistics, mobile has a much higher bounce rate than tablets or desktops. Though our two sites above aren’t experiencing those numbers at all. 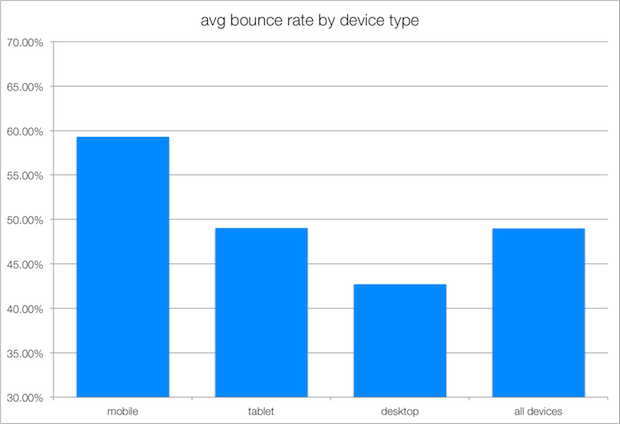 Another often-overlooked issue, shown below, is the user who performs product research on a smartphone, yet switches to a desktop to make an actual purchase. 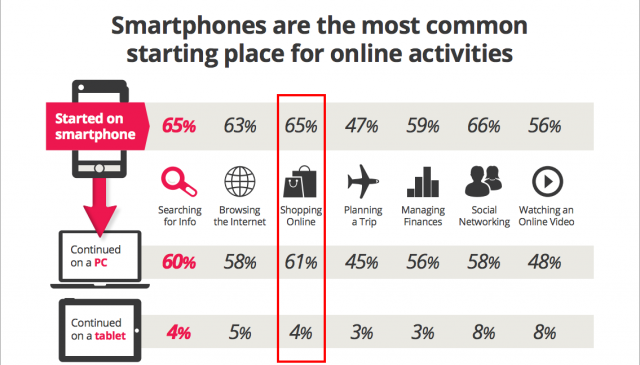 A 2012 study by Google shows how smartphone users will often finish their session on another device.

By using Google’s Universal Analytics, identification of both users and their devices is tracked, giving you a better picture of conversions and bounce rates.

Standard analytics would see a user who accessed the site from three devices as three unique visitors. But Universal Analytics will see this scenario as a single user who accessed via three separate devices. Increasing conversions on a mobile site can be a tricky process. While on desktop versions of websites, it is key to provide lots of detail and examples, mobile follows the concept of less is more. For example, on mobile screens highly detailed product descriptions should be listed after other key elements, such as images, videos and purchase buttons.

It all starts, though, with analyzing what visitors are actually doing on each type of device. Before making changes, and before implementing A/B testing, study your website’s analytics and pay attention to device usage. Using these results in conjunction with other reporting measures, like surveys and customer feedback, you can get a better grasp on what content is failing to meet expectations. Heat maps are also a helpful tool to help find weak points in navigation and calls to action. Scrolling maps are useful to see the stopping point for the average user — how far she scrolls down the page before leaving the site or clicking something. 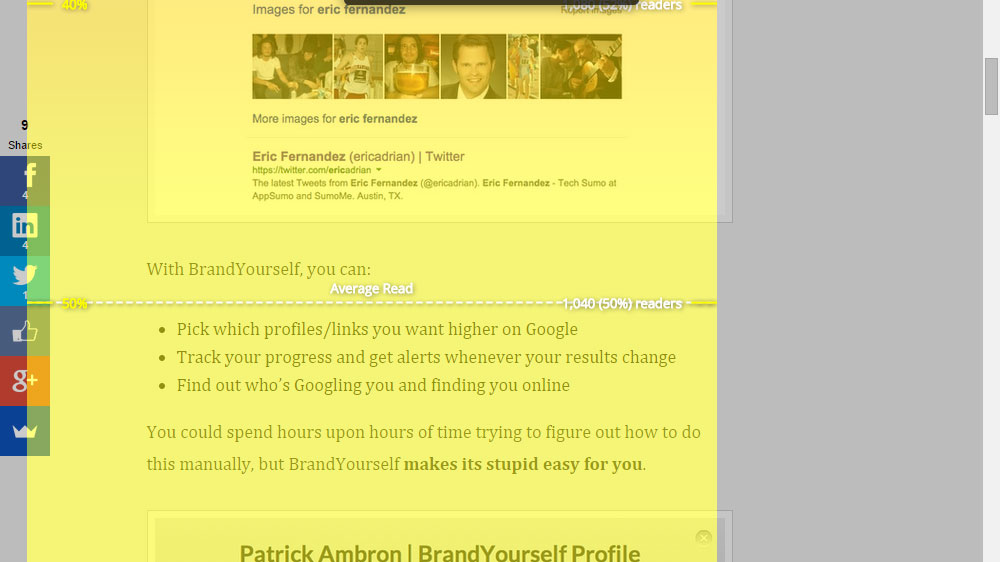 Most importantly, take industry averages with a grain of salt. They typically focus on a small, core group of sites, and are not necessarily indicative of how your target audience interacts with the products you sell. These types of reports are good to review and gain knowledge with, but the reports that should drive big changes in an online store are those generated from that store’s data.