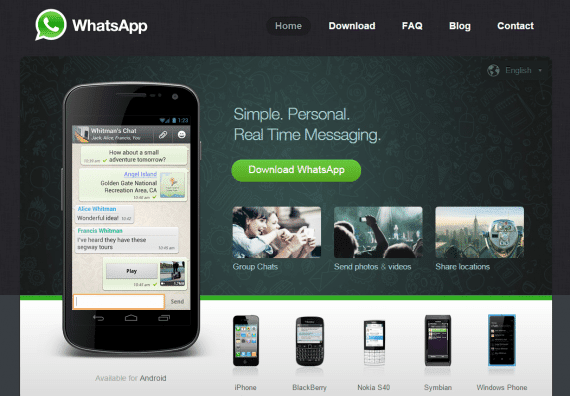 WhatsApp is a mobile messaging app that allows users to communicate via free SMS style messages within the app. It launched in 2009 and gained popularity as a way of avoiding SMS charges. The app now has over 700 million users, a huge 70 percent of which access the app daily — with short, sharp text-based messages and images. Users can also send video content through the app. But it requires lots of data to download these large files, which can be difficult on limited mobile plans.

WhatsApp quietly introduced what it called “broadcasting” in late 2013. It allows users to send messages to a group of people at once, without revealing the recipients to one another. This has the benefit of streamlining communications and avoiding what can become incessant notifications as the group members communicate among themselves.

This is helpful to marketers, who can reach almost 100 percent of their WhatApp contact list. Compare this with the organic reach of Facebook — roughly 6 percent — and the attraction of building a WhatsApp audience becomes clear.

Messages are sent directly to the recipient’s phone and, importantly for marketers, are handled no differently than those sent by friends and family. WhatsApp also offers a more instant way for marketers to reach their audience, with messages likely to be opened and read within the first few minutes of being sent, rather than hours for Facebook.

News organizations worldwide have been experimenting with the WhatsApp broadcast feature. In 2014, the British Broadcasting Corporation used WhatsApp “Broadcast Lists” to push news to relevant communities on the general elections in India and the Ebola crisis in West Africa. The BBC used their existing channels to promote the mobile number for users to add to their contact list, and asked them to send the word “JOIN” to the same number to start receiving messages. Users could also unsubscribe by sending “STOP” at any point — much like a standard SMS campaign.

Using WhatsApp for business can be delicate. WhatsApp is overwhelmingly used for personal communications. Any brand entering this space must tread carefully. The BBC recognized this challenge and made it clear from the outset that the maximum number of messages sent each day would be three.

WhatsApp places limitations on the setup of Broadcast Lists: each list is typically no more than 250 contacts. But in this instance the BBC worked with WhatsApp to increase its list beyond that number. While small businesses would struggle to achieve these kind of concessions from the Facebook-owned app, a number of lists can be created with different focuses, or even extensions of the same groups with duplicate messages. But the real challenge of WhatsApp marketing is in building a Broadcast List, as each recipient must add your number to her contacts to receive messages. 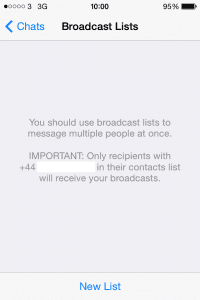 Once you have contacts, set up your Broadcast List.

To start using the WhatsApp broadcast feature, you’ll need a phone and number that isn’t tied to an individual. The reasoning behind this is that WhatsApp links to your phone’s address book and the notifications can become annoying if your phone is for personal use.

To get started, simply download the app — it is available for all mobile devices — and promote the number through your existing marketing channels to encourage users to sign up.

You can edit your list to add or remove people at any time. To do this tap the (i) button on the list you want to edit and choose “Edit List.” Here you can add and remove members as requests come in.

WhatsApp offers marketers a unique opportunity to tap into a highly engaged audience and build a list of consumers who want to hear about your businesses. To date, most businesses using the broadcast feature have been news organizations. But look for more businesses to experiment with WhatsApp in 2015.