When Ecommerce Warms Your Heart

Young Leo Forrest’s story is both very sad and heartwarming. It is the sort of tale that moves you to want to help, to do what you can to make his life better. Thanks to ecommerce more than 3,000 people have helped Leo, donating in excess of $140,000 AUD in just over a week via the crowdfunding site GoFundMe.

Ecommerce, of course, is the exchange of money for goods or services over the Internet. But the electronic exchange of money and the technology that makes it possible has also fueled the rise of compassionate crowdfunding, wherein sites like GoFundMe, YouCaring.com, CrowdRise, and Causes allow individuals and organizations to ask for and receive donations.

The underlying technology that makes charity crowdfunding possible is available because of its use in commercial ecommerce. So ecommerce service providers, software makers, and even merchants collectively contribute the infrastructure and expertise which helps fund many causes.

Leo Forrest Has Down Syndrome

Leo Forrest was born on January 21, 2015 in an Armenian hospital. His father, New Zealand-native Samuel Forrest, was waiting in the hallway.

“This pediatrician walks out of the room with a little bundle — that was Leo,” Samuel Forrest said, according to a Good Morning America report. “She had his face covered up and hospital authorities wouldn’t let me see him or my wife. When the doctor came out, he said, ‘There’s a real problem with your son.’”

Leo had Down syndrome. Samuel Forrest was shocked and surprised, but he was also a father. Samuel loved his son from the moment he saw him and held him. The Down syndrome could not change the way he felt.

“They took me in see him and I looked at this guy and I said, he’s beautiful — he’s perfect and I’m absolutely keeping him,” said Samuel Forrest according to ABC News.

In many countries, Samuel Forrest’s last phrase “I’m absolutely keeping him,” might sound odd. What else would he do? Unfortunately in many former Soviet block nations, the common practice is to abandon Down syndrome children like Leo Forrest to orphanages or mental institutions for life.

Leo’s mother, Armenian Ruzan Badalyan, reportedly wanted to abandon him and has filed for divorce, at least in part because of Samuel Forrest’s decision to raise Leo.

When Badalyan filed for divorce and rejected Leo, she also removed all of Samuel Forrest’s support network, her family would not help raise Leo, and the elder Forrest was no longer welcome in the family home.

So on January 27, when Leo was just six days old, Samuel Forrest published a page on GoFundMe. He was looking for help to move back to New Zealand where he believed he would be able to earn a better living and get help to raise Leo. 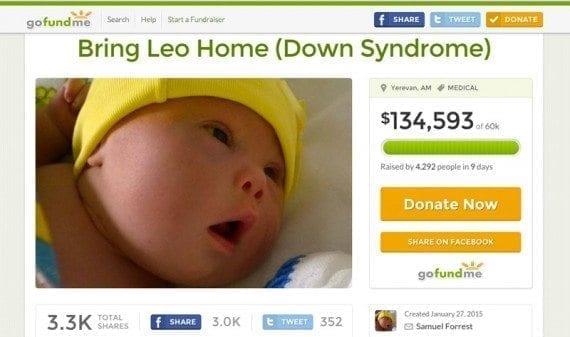 This ecommerce-enabled GoFundMe page helped Leo and Samuel Forrest raise the money they needed to move to New Zealand.

“Thanks everyone – we are stunned beyond words at the incredible support and love you’ve shown for little Leo,” Samuel Forrest wrote in an update on the Bring Leo Home GoFundMe page.

“Leo and I found out in the wee hours of morning that we had crossed our target. He is a lucky guy to have the support of thousands of friends like you around the world. Some of the additional funds that we have raised will be used to secure better living conditions in Auckland, and to give Leo higher quality opportunities when it comes to education — a good home and school cost money, but Leo will have all that and more, thanks to you.”

Leo’s case has a relatively happy ending. Thanks to ecommerce technology, good people the world over gave a small piece of what they had to help Leo and Samuel Forrest. Those generous folks didn’t have to wait to act, they could give immediately.

In fact, even as this article was being written over a few hours on the evening of February 5, donations to the Bring Leo Home page grew from about $80,000 AUD to more than $141,000 AUD.

Certainly, most of the credit goes to those who give, but it should make the ecommerce industry, perhaps, a little proud to know that our tools can also do such good work.

Other Stories to Be Told

According to published reports, children with Down syndrome are abandoned at an alarming rate in some Eastern European nations. In 2011, as an example, a Utah couple made national news in the United States when they traveled to the Ukraine to adopt a four-year-old girl who “was scheduled to be transferred to an adult mental institution, where she would live out her life with no hope for a family or an education.”

The couple first saw their new daughter on Reece’s Rainbow a site which helps to find adoptive parents for Down syndrome children.