Use a classic writing technique popularized in the newspaper industry’s heyday to improve blog content and communicate with precision.

The inverted pyramid is a writing structure that places a summary of the most important information about an article in the first paragraph and supports that summary with quotes and other evidence in subsequent paragraphs. The most compelling points are closest to the top of the page. 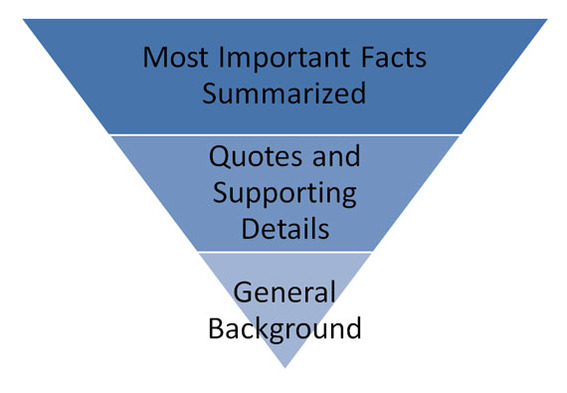 The inverted pyramid is a classic writing structure often used in journalism that places the most important summary information at the top of the article.

What’s more, the inverted pyramid has some distinct advantages in the Internet era. For example, the structure’s first summary paragraph may be well suited to microblogging sites like Twitter or text (SMS) updates, both of which are frequently limited to 140 characters.

The inverted pyramid also does relatively well in RSS feeds that include only the first few lines of an article, and because the structure gives its audience a clear indication of what the article is about, it may be good at communicating key points to readers that scan, who are common online.

Finally, some beginning writers — which may be an apt description for at least some ecommerce entrepreneurs — find that the inverted pyramid’s structure provides a good framework for composing articles.

Using the Inverted Pyramid in Your Blog

As mentioned above, this form is best suited to fact-driven posts. So begin by asking yourself if giving blog readers “the facts and nothing but the facts” makes sense for what you want to communicate.

If you decided that a factual approach would work well for your blog topic, try to include a summary that describes who, what, why, when, where, and how in your first paragraph. The key here is to try to include as many of these as you can. In practice, good inverted pyramids will feature two or more.

The “who” should be thought of as the doer of action or, in terms of grammar, the subject of the leading sentence. Why, when, where, and how are self-explanatory.

Imagine that you’re going to write a blog post about a new kind of home security system that is easy to install because it uses a technology called network-over-power.

For this example, start with the doer, a homeowner, let’s say, and don’t be afraid to use the second person (you) or even the implied second person.

Next, describe some specific action. In the example, this might be to install the security camera. The example paragraph might also seek to explain why the action can be or was completed.

“You can install the new Safetyco security camera in your home in less than 5 minutes thanks to a patented network-over-power technology.”

If we employed an implied second person as the doer of the action, the paragraph might read like the following.

“Install the new Safetyco security camera in your home in less than 5 minutes thanks to a patented network-over-power technology.”

It may be instructive to look at some recent news articles as further examples.

“A commanding 38 percent of all smartphone users in the U.S. used Android-based devices in the three months ending in May, comScore reported on Tuesday” — Computerworld, July 5, 2011.

“Google’s Android mobile OS has continued to widen its lead on Apple’s iOS in terms of U.S. smartphone subscribers, while Research in Motion and Microsoft have fallen even further behind, according to a new survey” — Apple Insider, July 5, 2011.

“An Android-based device from Samsung appears to be the phone to beat. According to Tuesday data from comScore, Samsung was the top U.S. handset manufacturer between March and May with 24.8 percent of the market, while Android nabbed 38.1 percent of smartphone market share” — PC Magazine, July 5, 2011.

You should be starting to get the idea now. Here are a couple additional examples from blogs on retail websites.

“On March 25, 2010, professional climber Steve House took a fall that nearly killed him. A flake of rock broke, gear pulled and bones snapped as House fell 80 feet off the north face of Mount Temple in Alberta, Canada” — REI Blog, July 5, 2011.

“We’re now accepting pattern submissions for our new Threadless Patterns Line, which will be printed on all kinds of amazing products (including tees) ” — Threadless Staff Blog, June 27, 2011.

Once this extremely important initial paragraph is complete, the second paragraph should provide important supporting details. Each subsequent paragraph would include increasingly more marginal data.

As an example of what this might look like, consider the PC Magazine article referenced above. This was its second paragraph.

“In the past few months, Samsung has unveiled the Droid Charge, its first smartphone on Verizon’s LTE network, as well as the Nexus S 4G, the first stock Android, Gingerbread smartphone with Google Voice, and the Samsung Galaxy S 4G, a 4G version of the popular Vibrant on T-Mobile. Nonetheless, the company’s handset share remained flat between March and May. Number-two handset maker LG increased 0.2 percent to 21.1 percent, followed by Motorola, down 1 percent to 15.1 percent.”

Notice how the first sentence specifically supports the claim that “an Android-based device from Samsung appears to be the phone to beat.”

To compose your own “middle” paragraphs in the inverted pyramid, consider making a list of all of the facts that support your summary paragraph. Rank each item in the list and write about it in turn. The most important (highest ranked) points come first.

The inverted pyramid is a writing structure that became popular in the newspaper industry. Its primary features include the idea of placing the most important facts associated with an article at the top and using a summary paragraph that communicates all of the key points.

For blogging, the inverted pyramid has the advantage of giving new writers a specific structure to follow; summarizing the post for readers; and providing a good description for social media and RSS.

Applying the inverted pyramid will take some practice, but most anyone can use it.