Google continuously tinkers with the appearance of ads on its search result pages. In the past couple of years, Google removed the right-side ads and added a new fourth ad above the organic results. These were broad changes that applied to all advertisers.

But there is also a steady stream of smaller changes in AdWords. Ad extensions are one of these. For advertisers, a speedy implementation of updates to ad extensions can create an advantage over the competition.

What Are Ad Extensions?

This would create an ad like the one below for the query “surface pro 4”.

A standard AdWords ad for the query “surface pro 4”. 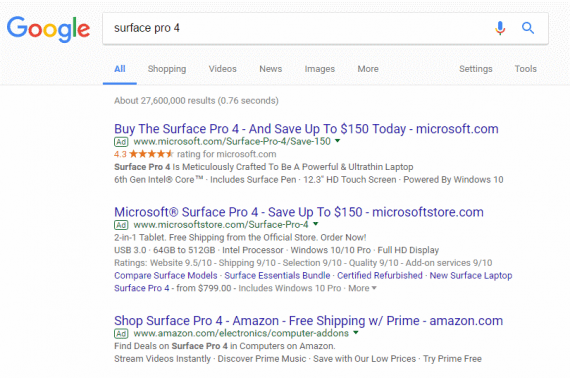 The top three ads for the “surface pro 4” query all contain ad extensions.

We can see a ratings extension (4.3 stars) on the first ad from Microsoft.com as well as four “callouts” at the bottom of the ad, starting with “6th Gen Intel® Core™”.

The second ad, from Microsoftstore.com, has the standard format followed by the callout extension, rating extension, sitelinks (the row of four blue hyperlinks starting with “Compare Surface Models”), and a Google shopping extension (“Surface Pro 4 – from $799.00).

The third ad, from Amazon, contains only four callout extensions that are not customized to the specific query of “surface pro 4”.

When Do Ad Extensions Appear?

Advertisers cannot control which extensions appear with an ad, how many appear in one ad, and when they appear. Google makes the determination based on the exact query and Google’s calculations of what will improve the click-through rate of the ad. Thus we see ads with one ad extension, or many.

But advertisers do create ad extensions, thus making the extensions eligible to appear, at an account level (for most extensions), campaign level, or ad group level — whichever is most likely to get the click.

A new extension in the new AdWords interface, which is in beta and rolling out gradually to all accounts, is called the Promotion Extension. I have used it with one of my ecommerce clients, to good results.

The new extension appears with a small price-tag icon and includes four components: an occasion (if warranted), the promotion type (required), a promotion requirement (if warranted), and the item. Here is an example. 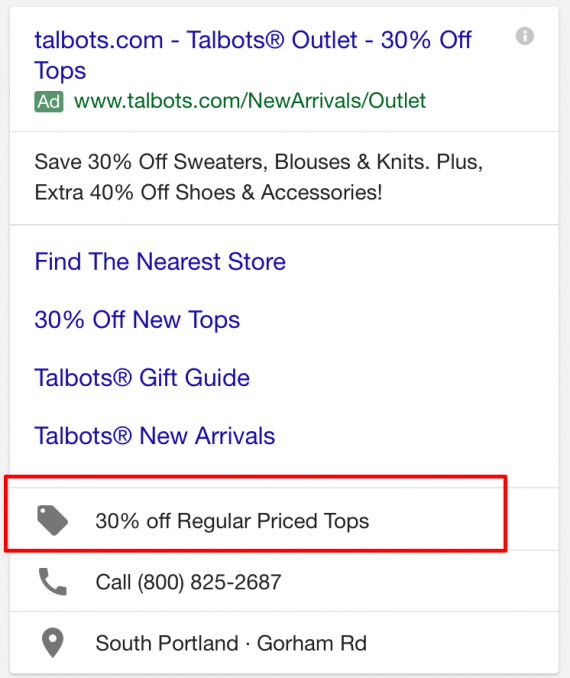 The new Promotion Extension appears with a small price-tag icon and includes four components: an occasion (if warranted), the promotion type (required), a promotion requirement (if warranted), and the item. Image: Search Engine Land.

Setting Up the Promotion Extension

To create the extension, navigate to the Ad Extensions page and start at this screen. 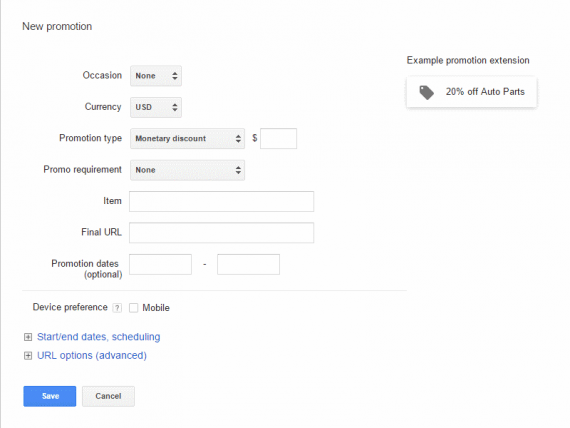 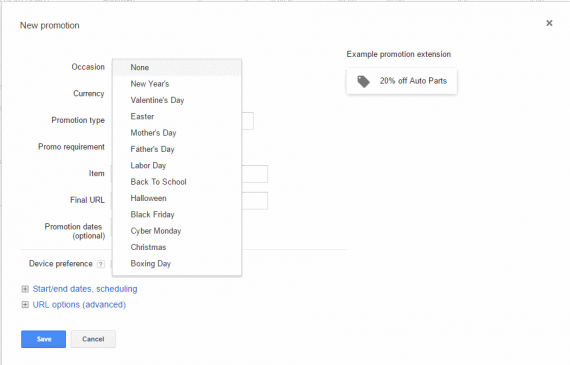 Select an occasion from the drop-down menu.

Next, select the currency: USD, CAD, GBP, NZD, AUD, or EUR. Then select the type of promotion: a percent off or a monetary discount with the option of “Up to” if it varies. 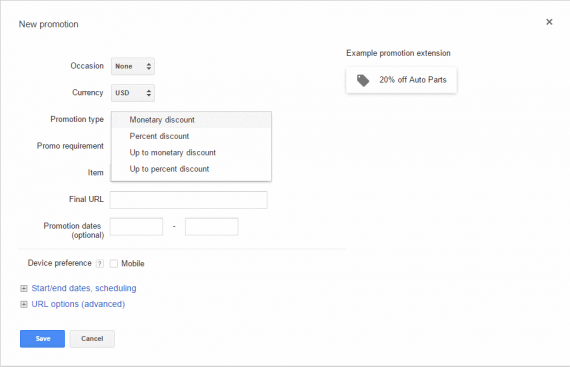 Select the currency and the type of promotion: a percent off or a monetary discount.

Google offers the helpful option to include a promo code (for tracking) or “On orders over” if, for example, you offer free shipping over a certain amount. 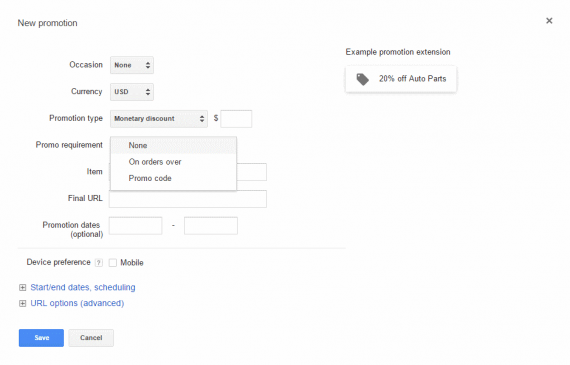 Google offers an option for a promo code or “On orders over” if, for example, you offer free shipping over a certain amount.

You then name the promotion (up to 20 characters) and link to the final URL where users can find the specific discount and items included. You can also set promotion dates for limited-time offers. There are advanced options for the URL and the promotion dates and scheduling. 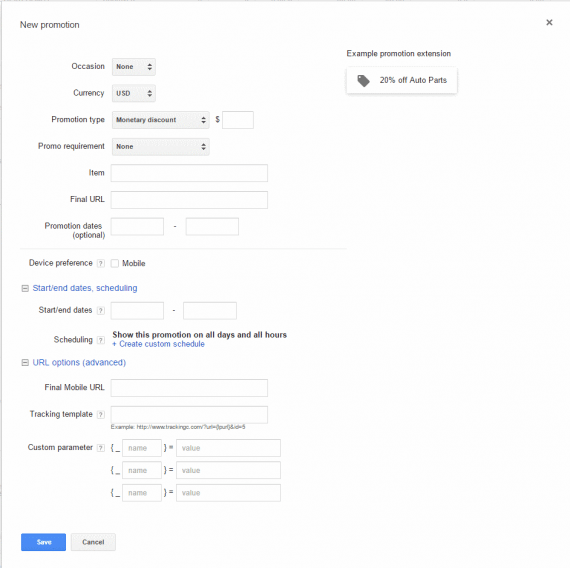 Name the promotion and link to the final URL. You can set promotion dates for limited-time offers.

You can set a start and end date on the promotion as well as set a specific schedule for days of the week or hours of the day you want your promo to run. This is helpful for happy hour and evening events, for example. Lastly, you can provide a mobile-preferred URL, and add tracking variables.

My most recent use of Promotion Extensions ran May 4 and 5 for a client’s flash sale. Here are the results for the entire account and for the promo extension present.

Keep in mind that of the roughly 500 clicks where the promo extension appeared, only 14 users clicked the actual extension, representing 2.78 percent of clicks. However, having the extension present increased our CTR by 30 percent and increased our conversion rate by 75 percent.

The extension works, in other words.