For many consumers, a car or truck is the second largest purchase they will make after buying a house. In July 2020, for example, the average new vehicle price in the United States was $38,378, according to a Kelley Blue Book release.

Despite the cost, automobile sales could be moving online.

Since at least 2018, several surveys from firms that include Google, Adtaxi (marketing agency), and MWWPR (public relations) have found that 80 to 90 percent of consumers research a new or used vehicle online long before contacting a dealership.

Many of these shopping journeys begin on websites that look and act like an ecommerce marketplace. These sites have product search capabilities similar to an ecommerce site. They have search results pages and product detail pages (which they call vehicle detail pages or VDPs). 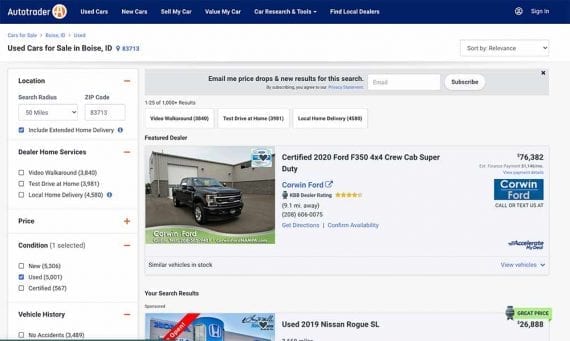 Automotive sites such as Autotrader share many characteristics with ecommerce marketplaces.

The only thing most of these sites lack is a method to buy a vehicle. And even this is changing. eBay Motors, for example, has always offered a way to purchase vehicles, and other leading marketplaces such as Autotrader, CarGurus, Cars.com, and TrueCar are all implementing tools that start the credit approval process.

What’s more, many automobile dealership websites already look and act like ecommerce, although some are far behind the features, functionality, and performance of modern platforms.

Effectively, the industry has trained its customers to shop online. And this was before the pandemic.

Earlier this year, when the coronavirus shut down so many businesses across the United States and the world, car dealers rapidly moved online.

In May 2020, Cox Automotive, which owns several auto-related software tools and sites, including Autotrader, released a report looking at how Covid-19 had impacted the auto business.

More recently, Cox Automotive has said that Covid-19 concerns are waning as car and truck shoppers start to worry more about politics and the pandemic, but the willingness to complete a car deal online could stick around.

Investors, at least, appear to believe that automotive ecommerce is a promising business model relative to brick-and-mortar.

CarMax was launched by Circuit City, the electronics retailer, in 1993. It is now an independent, public company and the largest used car dealer in the United States with fiscal 2020 revenue of $21.42 billion, an increase of 11.9 percent over fiscal 2019. That revenue generated $888.43 million in net income.

That is a lot of revenue and net income, but not all investors are impressed. As of October 22, 2020, CarMax had a total market capitalization of $14.84 billion, some $6.5 billion less than its annual revenue.

The relationship between revenue and market capitalization is sometimes called the price-sales ratio or PSR. This relationship is an important valuation metric, and it is not uncommon to find a range of average PSRs within an industry.

Thus, as a company, CarMax is worth less than $1 per dollar of revenue.

Now consider Carvana and Vroom. Both companies are, in effect, ecommerce businesses selling used cars. They have differences for sure, but they represent investors’ confidence in automotive ecommerce.

Vroom had fiscal 2019 revenue of $1.19 billion, an increase of 39.32 percent over the prior fiscal year. Despite that revenue, the company had a loss of more than $140 million for the fiscal year. Compared to CarMax, Vroom had much less revenue and a loss, but its market capitalization as of October 22, 2020, was $5.86 billion, roughly five times revenue. Investors apparently like Vroom’s business model, automotive ecommerce, more than CarMax’s.

This difference is even starker with Carvana.

For fiscal 2019, Carvana had $3.94 billion in revenue, a 101.84-percent increase over the prior year. That revenue generated a negative net income of more than $114 million.

Despite that loss, Carvana had a market capitalization of $33.87 billion on October 22, 2020 — approximately eight times revenue — making it worth more than twice as much as CarMax.

While other factors can indicate investor confidence, the difference in the market capitalization and price-sales ratio between CarMax, Vroom, and Carvana may imply that automotive ecommerce is coming in force.