“Practice good list hygiene.” That’s common email marketing advice many of us hear regularly. It means to do things like:

Email marketers practice good list hygiene because it improves deliverability rates, and because it trims the fat from email lists. It also improves open rates and click rates. These are all good things.

To the marketer, this sometimes feels more like amputation than hygiene.

Rather than removing one-third of the subscribers, the marketer decides to launch an activation campaign.

What Is an Email Activation Campaign?

Email activation programs are what they sound like. They are sustained efforts to re-engage with subscribers who no longer respond to emails, but have not yet unsubscribed.

Email activation programs come in a variety of flavors, but they can be broken down into three typical types of re-engagement offers sent at three different times.

If a 10 percent offer isn’t working well enough, try free shipping, or 15 percent off the next order. Many marketing gurus consider 10 percent off a weak offer. People are more likely to get excited about 15 or 20 percent, though that much of a discount may harm your financial results.

If offering discounts isn’t getting anywhere, consider a contest or a sweepstakes. This can be on Facebook or on your site, and it can be a simple “enter to win” offer, or a participatory contest (for example, submit a photograph of you in our sporting gear for a chance to win $1,000 in merchandise). Leveraging people’s innate urge to share can sometimes work better than offering just another discount. Partnering with a non-profit to support a cause your audience supports might be another tactic to try. 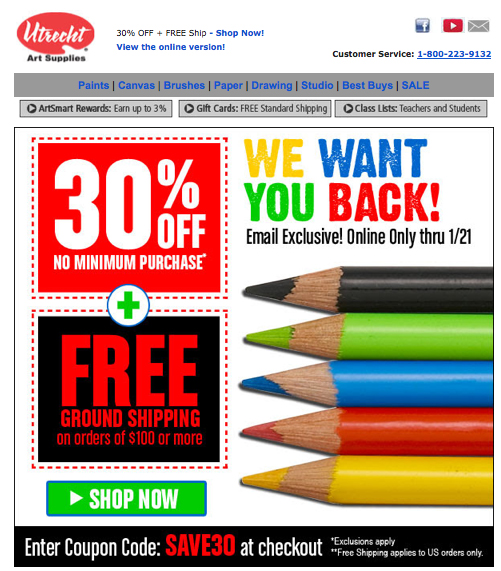 An example of a mid-term re-engagement offer.

How Well do they Work?

That campaign, which included two emails for a sweepstakes, produced only 8.33 percent of the lapsed subscribers back. The emails were split-tested, and the sweepstakes prizes were two tickets to the 2012 Consumer Electronics Show in Las Vegas, with round-trip airfare for three nights at the Treasure Island Hotel and Casino. CNET was also mailing to a well-segmented list that had come to expect relevant, high-quality content from a major brand. It was set up to do well from the start.

For some businesses, even a “great” re-engagement rate of 8 percent may not be worthwhile, given the effort required. It depends on how much a subscriber is worth to you, how big your list is, and what kind of resources you have to work with.

To recapture 8 percent of 10,000 subscribers means 800 reclaimed subscribers. If that seems like too small a group to worry about, you can just keep them on your list, wait a few months, and do a re-engagement campaign later, or even annually.