Shapermint is a niche apparel site for females, having launched in 2018. It now ranks on Google for roughly 17,600 keywords with just 371 linking domains.

Can an ecommerce site launch in 2019 and receive organic search traffic without backlinks? Most search optimizers believe it’s not possible. I used to think the same. But I keep seeing evidence to the contrary.

Google recently launched “SEO Mythbusting,” a YouTube series. In the first two installments, Google employees downplayed the importance of building links to a site. However, sites that perform well in search typically have strong backlink profiles. So how does a new business compete?

I have some good news.

Last year, in “SEO: How to Win against Giant Competitors,” I shared the fascinating story of Fashion Nova, a retailer for females that launched its ecommerce site in 2013. By 2018, it had higher organic search rankings than many well-known brands, in spite of a much weaker backlink profile. What it did have, however, was a strong demand for its brand name, as evidenced by Google Trends. I suggested in the piece that brand searches could be an excellent proxy for the popularity of the site.

I wrote, “Put yourself in Google’s position. Imagine seeing a massive search demand for a site with far fewer links than similarly searched competitors. It makes sense to rank the results to meet searchers’ expectations instead of relying on historical backlinks.”

In this post, I’ll describe Shapermint, another new, highly-ranked ecommerce company with few backlinks. The company, which sells female shapewear, launched in 2018. According to a post on Reuters, the company recorded $50 million in sales in just nine months!

I typically use SimilarWeb to understand what channels drive traffic to a website.

For Shapermint, the main traffic drivers are social media sites, followed by direct visits, and then search. Within the social channel, Facebook accounts for the most traffic; YouTube is a distant second.

The bulk of organic search traffic is from queries on the brand name, Shapermint. This is consistent with the Google Trends chart. 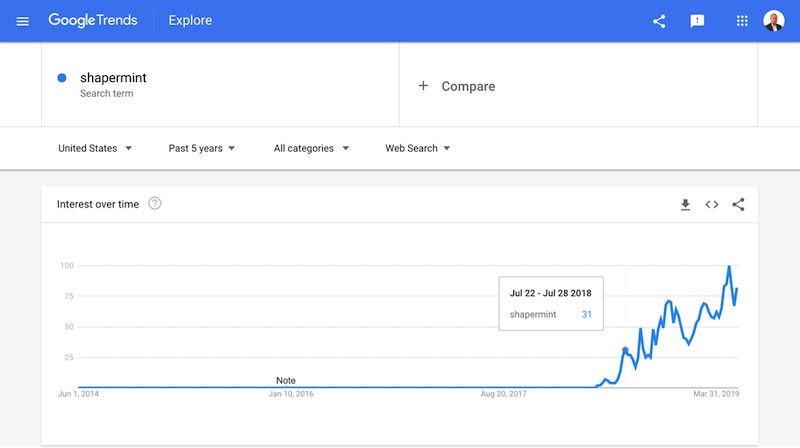 Google Trends reports that most organic search traffic is from queries on the brand name, Shapermint.

So, it seems Shapermint is successfully branding its site on Facebook, which is apparently driving a large number of searches for the company name on Google. But, what kind of content drives branding and viral growth? Let’s check the website and social media accounts.

Shapermint built a community of more than 1 millions customers in less than a year and also secured write-ups with top publications. The company has a compelling marketing message and coordinated public relations.

On Instagram, Shapermint launched a viral campaign under the hashtag #ThisIsMyTruth, which resonated with many females. Instead of showcasing pictures of beautiful models, Shapermint encourages its audience to share photos without using shapewear.

The company’s message — there shouldn’t be a need for our products — is original and is clearly working.

Shapermint’s ads on Facebook and Instagram use the same #ThisIsMyTruth hashtag. And the ads use real people — not models. Thus the company encourages females to accept their bodies while implicitly encouraging them to purchase shapewear. 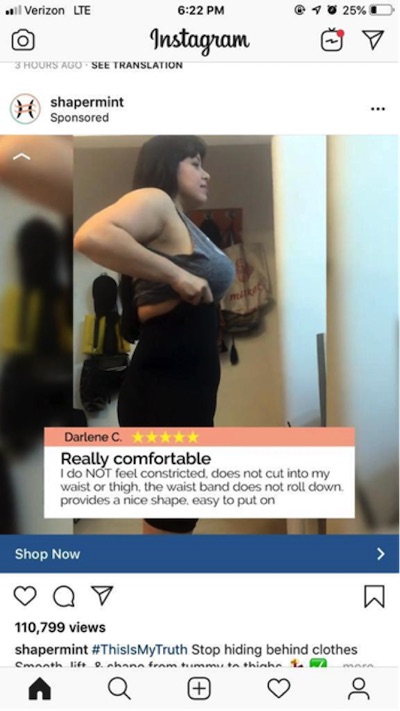 Shapermint’s Instagram ads use the same #ThisIsMyTruth hashtag as its viral campaigns, as do the Facebook ads.

How does it translate to organic search rankings? According to Ahrefs, Shapermint has just 371 linking domains. But it ranks for an impressive 17,600 keywords — in less than one year.