SEO: How to Win against Giant Competitors

In “SEO: How to Rank against the Heavyweights,” fellow contributor Jill Kocher Brown addressed the challenges of ranking for high-demand keywords.

I’m often asked about this topic. Can a small company with a limited budget compete on such popular search terms as “fashion,” “shoes,” and “jewelry”?

I’ll address that question in this article.

Why is it so difficult to rank for highly competitive keywords?

Imagine that the sites in organic search results are physical stores. If those stores are located in premium locations, such as Madison Avenue in New York, the volume and quality of shoppers would be high. Sales would be high, too, presumably. However, the price of real estate on Madison Avenue is prohibitively expensive for most small business.

Similarly, organic search results for competitive terms primarily consist of large companies that can afford the level of public relations required to rank.

Thus the conventional wisdom for smaller brands from professional search optimizers is to focus on ranking for less popular keywords that in aggregate can produce similar traffic levels as the popular terms. It’s the equivalent of leasing space in several affordable strip malls rather than a single location on Madison Avenue.

Sometimes, however, conventional wisdom is wrong.

Instead of identifying keywords, focus on the people who are searching — their unmet needs and frustrations.

In many industries, there are large groups of frustrated consumers that are ignored by established providers.

Fashion Nova is a California-based retailer that sells mainly female apparel items. It opened its first brick-and-mortar store in 2006. The ecommerce site, FashionNova.com, launched in 2013. It competes with large brands. But it ranks highly for many competitive, single-word terms — such as “fashion” — often ahead of bigger companies. 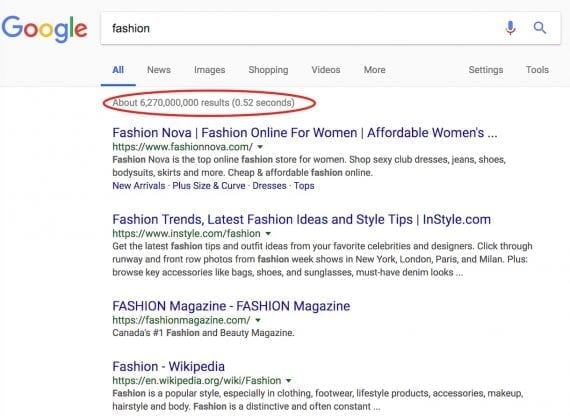 For the author’s search for “fashion,” Fashion Nova ranks number 1.

On my search for “jeans,” Fashion Nova ranked number 3, ahead of many large brands, such as Nordstrom, Lucky Brand, American Eagle Outfitters, and Hollister. 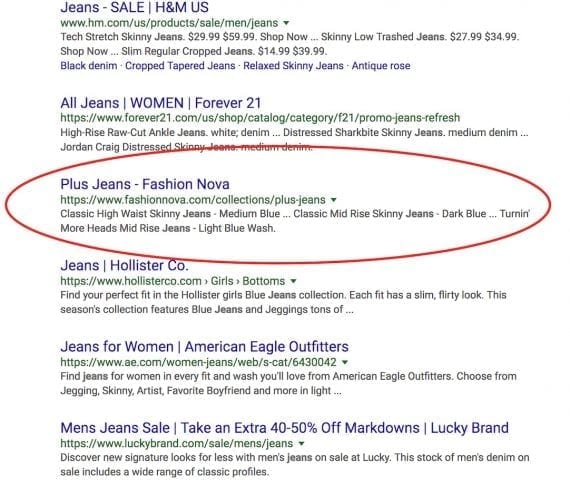 Fashion Nova ranks number 3 for “jeans,” ahead of many larger brands.

Fashion Nova is outperforming competitors with huge marketing budgets and stronger backlink profiles. Backlinks are often considered the most critical factor for search engine optimization. This is a good example of links not being the main driver of success.

Google’s search success depends primarily on the satisfaction of its users — searchers. Google doesn’t unilaterally decide which sites are the best. It relies on humans to gauge the effectiveness of ranking algorithms. The ranking algorithms are a means to an end. Ultimately, searchers need to be happy with the results.

Thus websites linking among each other are not the only reliable way to gauge relevance. Google could, in my observation, also look at the search demand for the brand name itself. 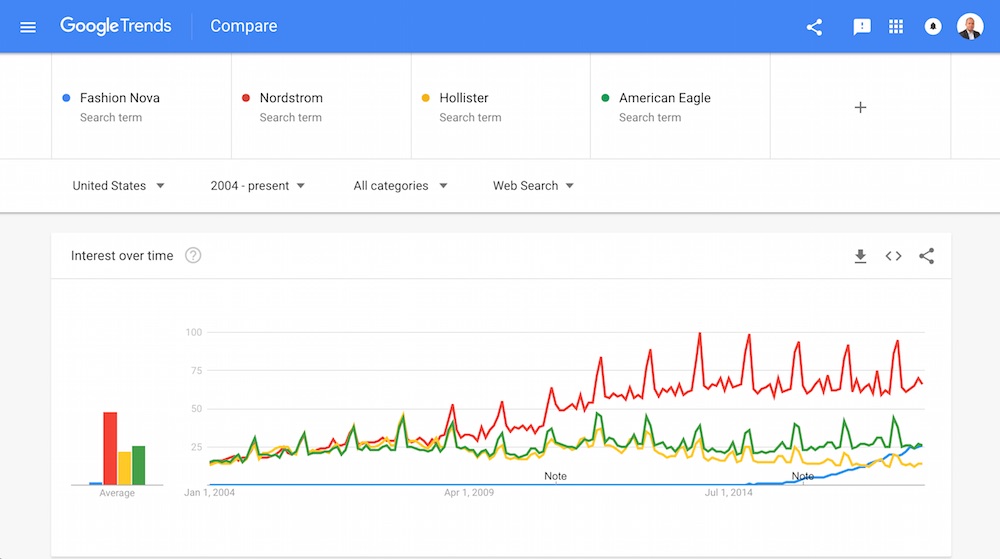 Put yourself in Google’s position. Imagine seeing a massive search demand for a site with far fewer links than similarly searched competitors. It makes sense to rank the results to meet searchers’ expectations instead of relying on historical backlinks.

Fashion Nova generated such a massive search demand for its brand that Google ranked it near the top to make their searchers happy.

In 2013, I witnessed a similar situation firsthand. I consulted for DigitalOcean, a hosting-company startup that had breakout success. It is now a leading brand in that industry.

How are these companies able to generate so much interest without first having high rankings?

Fashion Nova focused on under-represented demographics — minorities and plus sizes. DigitalOcean focused on hosting for individual developers, which the big providers ignored.

In both cases, the target customers love them and often rave to their networks. Their aggressive pricing also helps. But, most importantly, they created amazing value for an important but neglected or overlooked segment of a huge market.

However, their marketing strategy is what leads to a large number of brand searches.

Fashion Nova collaborates with minority and plus-size celebrities who have massive social followers. They share selfies and videos on Instagram wearing Fashion Nova’s clothing. For many consumers, being able to look like celebrities at a reasonable price leads to emotional reactions — and sales.

The rapper Cardi B, who has nearly 26 million Instagram followers, recently announced her own Fashion Nova clothing line. This demonstrates the effectiveness of Fashion Nova’s collaboration with influencers.

Another advantage of this strategy is that Fashion Nova is organically gaining high-quality links from leading publications that cover celebrities. Thus the Instagram celebrity endorsements can pay for themselves via increased sales, and the long-term SEO benefits of those endorsements are essentially free.

Interestingly, Fashion Nova is not an aggressive content marketer. It doesn’t even have a blog!

This strategy doesn’t replace tactics to achieve more sales from existing rankings. But it will help generate solid growth.