Some search engine optimizers believe “entities” have supplanted keywords as the foundation for organic rankings. But it doesn’t mean that keywords are irrelevant.

Within SEO, entities are the people, places, things, organizations, and concepts contained in a knowledge graph, a description of related entities.

Google’s knowledge panel is a visualization of a knowledge graph. Search for the actor Harrison Ford and Google will display a knowledge panel showing a lot of info about Ford personally and professionally. It’s an example of an entity (Ford) and the facts related to it. 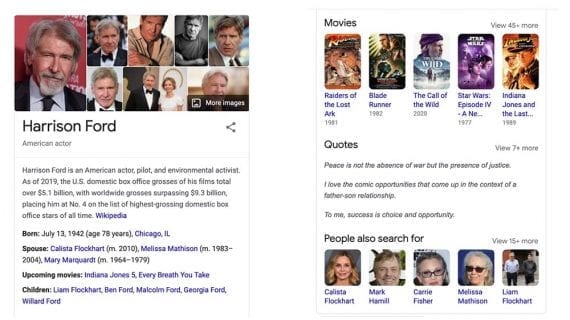 This knowledge panel for Harrison Ford provides an example of an entity (Ford) and the facts related to it.

You can learn that “Harrison Ford is an American actor, pilot, and environmental activist. As of 2019, the U.S. domestic box office grosses of his films total over $5.1 billion, with worldwide grosses surpassing $9.3 billion, placing him at No. 4 on the list of highest-grossing domestic box office stars of all time.”

You will also discover that Ford has been married three times, has five children, and is expected to appear in two upcoming films, one of which is a new Indiana Jones movie.

It would likely be impossible for Google, or any search engine, to provide this sort of information based on keywords alone. And due to its knowledge graph, Google’s search results for “Harrison Ford” will not include Ford automobiles because Google understands not just the words “harrison” and “ford” but also that Harrison Ford is a person.

The information that we find on Harrison Ford’s knowledge panel comes from Google’s knowledge graph.

“Search is a lot about discovery — the basic human need to learn and broaden your horizons. But searching still requires a lot of hard work by you, the user. So today I’m really excited to launch the Knowledge Graph, which will help you discover new information quickly and easily,” wrote Amit Singhal in May 2012 for Google’s official blog.

“Take a query like ‘taj mahal.’ For more than four decades, search has essentially been about matching keywords to queries. To a search engine, the words ‘taj mahal’ have been just that — two words.

“But we all know that [taj mahal] has a much richer meaning,” Singhal continued. “You might think of one of the world’s most beautiful monuments, or a Grammy Award-winning musician, or possibly even a casino in Atlantic City, N.J. Or, depending on when you last ate, the nearest Indian restaurant. It’s why we’ve been working on an intelligent model — in geek-speak, a ‘graph’ — that understands real-world entities and their relationships to one another: things, not strings.”

The “things” are entities, and the “strings” are the characters that make up a keyword. Thus, as early as 2012, Google was emphasizing entities over keywords.

“The idea of semantic search, the idea of a knowledge graph, none of this is new. Google didn’t invent this. Google adopted the concepts,” said Bill Sebald, the founder and managing partner of Greenlane Search Marketing and a Practical Ecommerce contributor. Sebald spoke during a live interview for the CommerceCo by Practical Ecommerce community on March 18, 2021.

Sebald believes that Freebase, a Wikipedia-like resource launched in 2007 by MetaWweb, a U.S. software company, is the basis for Google’s use of a knowledge graph and entities within that knowledge graph. Google acquired MetaWeb in 2010.

When it launched Freebase, Metaweb described it as “an open, shared database of the world’s knowledge” and “a massive, collaboratively edited database of cross-linked data.”

The connected items are entities.

These sorts of relationships allow Google to provide much better search results, and in many cases answer the intent of a person’s search query directly on the search results page.

This does not mean, however, that keywords have lost all of their SEO value. They have at least two important uses.

First, as the artificial intelligence firm Aylien noted, keywords help when an entity is either not known or is little known within Google’s knowledge graph.

As large as those numbers sound, they don’t come close to the total number of facts or entities. Thus for lots of things and concepts, keywords are still the way search works.

Second, keywords can help refine an entity search, again according to Aylien, which gave this example: “Combining the entity search ‘Pandora Music’ with the keyword search ‘number of customers’ will really hone your search to deliver exactly what you are looking for.”

I provided an “Entities 101” overview to members of CommerceCo. Here’s a partial recording of that presentation.